In search of a pilot boat on the wettest, windiest day of the year so far! 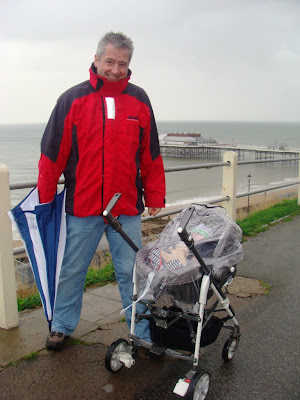 Above: Me with Luca, barely able to stand due to the wind and driving rain. Cromer, North Norfolk, Saturday November 14, 2009.

In preparation for my big 2010 swim, Beccy, Luca and I headed off to Cromer in North Norfolk on what the weather experts called the windiest, wettest day of 2009 so far. Arriving in Cromer at about 2pm, we stepped out of the car and the wind was simply immense. It was all you could do to stand up. What was bizarre though was the sea looked as calm as it could possibly be. Not a 'white horse' in sight. I don't think I will ever get to grips with the wind and the sea. I'll leave that to the experts.

We stopped in a restaurant overlooking Cromer Pier and I got chatting to the waitress about pilot boats. She spoke to her son who put me in touch with the local wet fish fishmongers. Trekking out in the rain again, we successfully got the phone number of a man who could possibly help us, but we were recommended to head towards 'Wells-Next-The-Sea'.

The drive along the North Norfolk coast was very picturesque, despite the driving rain. Arriving at a little hamlet, I noticed boats in the bay, and headed down a track. There was a local fisherman in typical fisherman's yellow protective clothing. I wound the window down and explained what I was looking for. "AArrghhhh" came the reply in typical Norfolk language. "You better goow too Wells-Next-The-Sea four thaaat. If oi took 'ya, I'd probably git lowst". I thanked him and continued on our way.

Arriving in Wells just as the sun set and the rain eased for about 10 minutes, I spoke to a fisherman who gave me a name and contact number of someone who could help me. We then found a most beautiful old sailing ship called "The Albatros". It was permanently moored in the harbour and was now a Bar, Restaurant, Music Venue and B&B. If you're in Wells, I thoroughly recommend it. We were served real ale, and Brancaster Bay Muscles in a white wine sauce. It was great!

Finally, we met the captain, Ton Brouwer, a Dutchman who explained all about the boat. He sat down with us, and we told him what we were looking for. He gave us a phone number, and said he would help us. 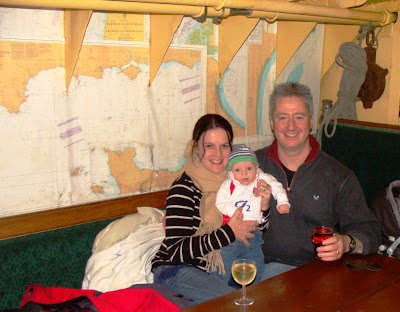 Above: Beccy, Luca and I enjoy the hospitality of Captain Ton Brouwer on board 'The Albatros'.

We headed home and I was satisfied that I had three numbers of pilots who could help us organise next year's swim. Despite the weather, it had been well worth while spending the day on the North Norfolk coast.