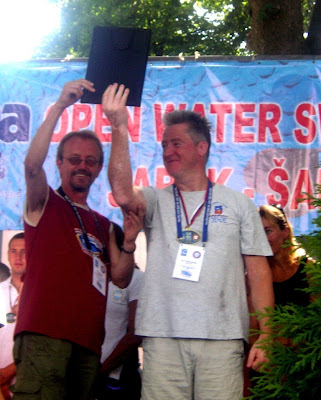 Above: Jarak - Sabac, race director Vojislav Mijic presents a plaque to me after the 2008 FINA World Cup race.

On Sunday June 28, 2009 I received a call from race director Vojislav Mijic to ask if I wanted to compete in this year's 40th anniversary swim from Jarak - Sabac. It is a 19KM river swim in water temperatures of about 27 Degrees Centigrade. Last years swim was a FINA World Cup event, but due to the costs involved in financing the event (about 60,000 Euros) it will not be a FINA event this year so anyone can enter. Due to the imminent birth of Beccy and I's first child, I am not swimming at the moment so will unfortunately not be attending. 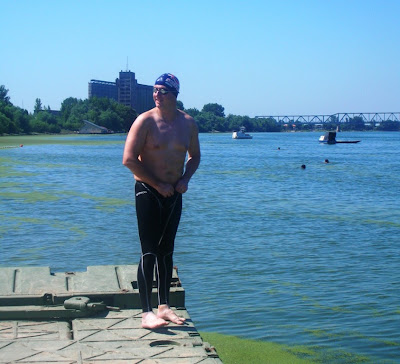 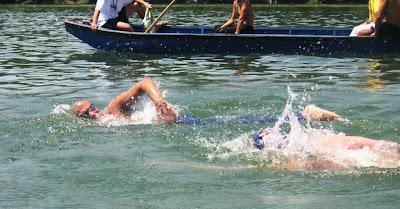 Above: Photos from last years event, including a personal race I had with Italy's Nicola Carradossi, which I eventually won.

If you are interested in competing, please telephone Vojislav directly on +38 115 348 951 and he will send you an entry form. He is not good on the computer so this is the best way to contact him. He is a fantastic guy, Sabac is a beautiful, cosmopolitan city, and the people are very friendly. If you go, I promise you will have a fantastic time.

Click below for my full report from last years event:- 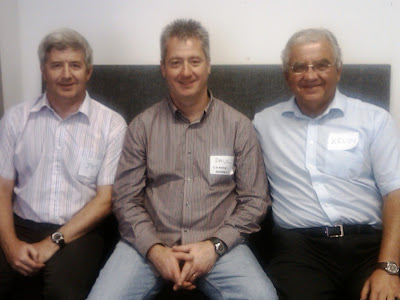 Through the channel swimming communities

"Google Group" set up by multi-channel swimmer Nick Adams, we were invited to attend an audition to go on the BBC TV show "Eggheads". Having put my name down on the list, I somehow ended up organising the auditions. Our team of six will be Kevin Murphy, Mike Cross, Jim Boucher, Graeme Schlachter, Megan Forbes and myself. "Eggheads" is a general knowledge quiz in which teams from all over the UK battle to beat the formidable Eggheads, a team of extremely knowlegeable quiz experts.

For the auditions, we needed just three of the team of six. On the day, if we get through the audition stage, the team will be five of us, and one reserve which will be Graeme.

Kevin, Jim and myself were the three available for the auditions, and we arrived at the studios in Great Tichfield Street, London for 2pm, where we were greeted by Katie and Jodie who were to be our hosts for the day. The first thing that was asked was what our team name was. Now anyone who has followed recent Channel Group discussions, knows that this has caused some 'heated' e-mail exchanges! Having arrived with the name "English Channel Waterheads", Jim came up with an excellent name - "Channel 5". If you live in the UK you will know that this is also the name of a TV Channel in the UK, so is quite a play on words, especially since we were auditioning for the BBC! I was pronounced "captain" of the team by Katie which was a surprise to me!

We had to fill in all the mandatory paperwork, and when asked for Kevin's address, Jim, by now on a roll, said:-

"Due to the amount of time he spends in the channel, his usual address is:

This had us in stitches, well me anyway! We had a quiz between us which ended up with a result of 2:2. I have no idea if that was good or not but we were then filmed and asked various questions which had to be answered on film.

We were thanked for attending, and told that we would be informed by the beginning of August if we had passed the audition or not. It was a fun experience, and I will update the blog once we know any further news.
Posted on Friday, June 19, 2009 5 comments: