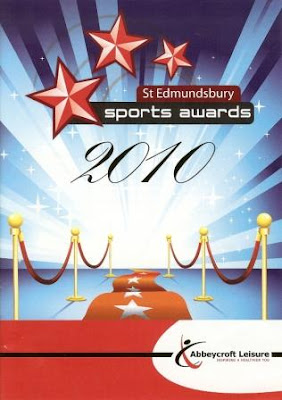 The award, sponsored by Body and Mind Studio was presented to Terry Wright, a volunteer coach at West Suffolk Swimming Club, at Bury St Edmunds Corn Exchange in front of 320 guests from the St Edmundsbury sports world. 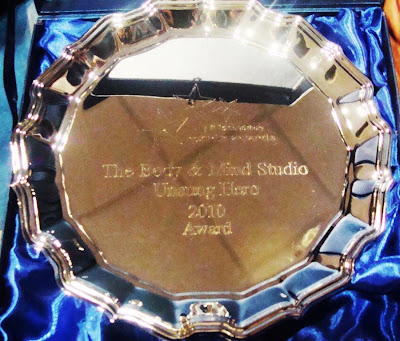 Above: The Body and Mind Studio 2010 'Unsung Hero Award' trophy.

Now in its fourth year the awards celebrate the outstanding sporting achievements and performances of individuals and teams from St Edmundsbury at local, regional, national and international level.

The 2010 winner Terry Wright was nominated with the following information “When Terry’s eldest daughter joined the West Suffolk Swimming Club he was quick to offer help. Now all four of Terry’s daughters and his wife swim with the club and Terry has become an irreplaceable volunteer. When a broken lane holder reel prevented the club using anti wave ropes Terry dismantled it, took it to his workshop, and repaired it and the club was back in action within five days. Despite having dyslexia, Terry self funded a UKCC level 2 coaching award and is now part way through his level 3 swimming coach qualification. He is a volunteer coach on poolside for up to 10 hours. Terry is also a keen fund raiser and just 18 months ago Terry and his family raised £1,000 for the club in a sponsored swim. For Terry nothing is too much trouble”. 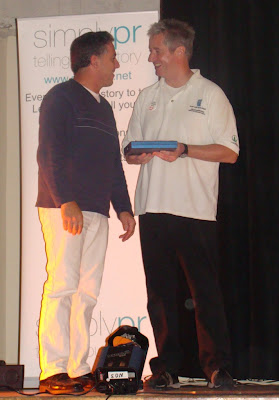 Above and below: Body and Mind Studio Managing Director, Paul Hopfensperger, presents Terry Wright with his trophy. 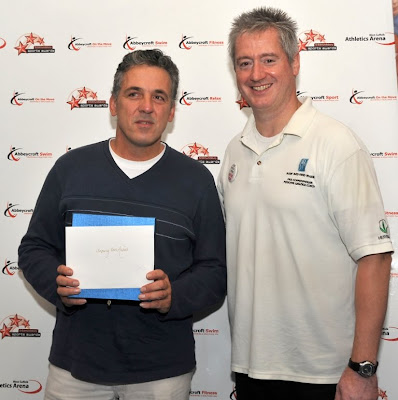 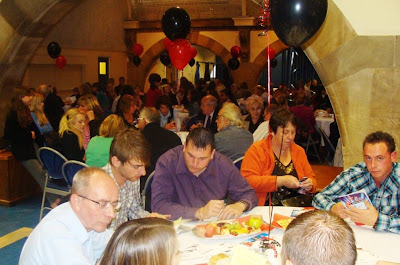 Paul Hopfensperger of Body and Mind Studio, said: “As a personal wellness and sports injury company, we are delighted to support the St Edmundsbury Sports Awards this year. The dedication that these men, women and children have to their chosen sport and their achievements in the sporting world representing St Edmundsbury are inspiring, and to present it to someone from my specialist sport, swimming, is simply fantastic!” 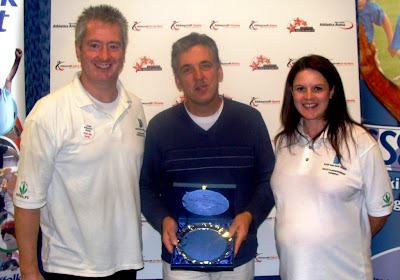 Above: Paul and Beccy Hopfensperger with Terry Wright and his trophy. 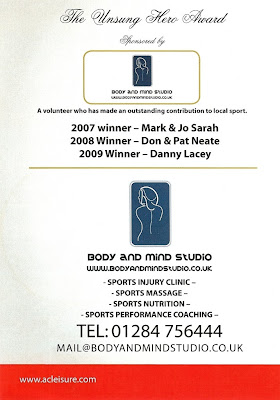 Michelle Banfield-Curran, Abbeycroft Leisure’s Sports Development Officer and organiser of the St Edmundsbury Sports Awards, said: “We are grateful to Body and Mind Studio for their support of our 2010 awards. Without our sponsors this event could not take place and the hard work and dedication of these sports men, women and children would not be recognised publicly.” 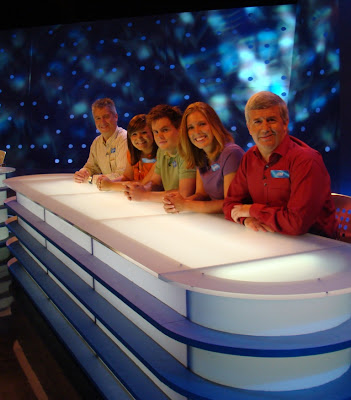 After over a year's wait, the big day is here tomorrow, Friday September 24th, 2010 - "The Channel Buoys & Gulls" take on the mighty 'BBC Eggheads'! Click here for original story.