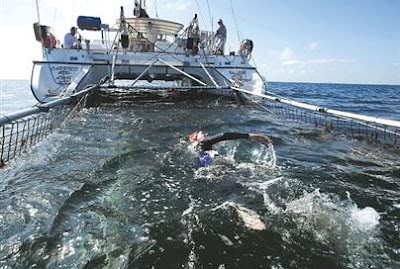 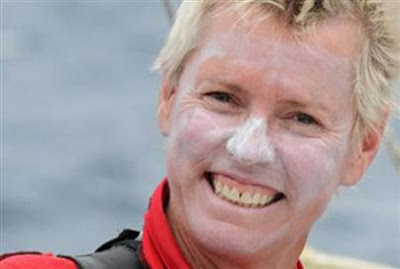 Above: Jennifer Figge, a 56-year-old American, is said to be the first woman to swim across the Atlantic Ocean. But did she?

When Jennifer Figge touched the shores of Trinidad last Thursday, the 56-year-old American completed a 3,400 kilometre, 24-day journey that began on Africa's Cape Verde Islands and ended on an abandoned leper colony. She became the first woman to swim across the Atlantic, a world record, perhaps.

But how much of it did she actually swim?

That is the heated dispute among aquatic marathoners, many of whom apply strict guidelines to these kinds of record-breaking firsts, right down to what the athlete wears. They believe that there is plenty to be skeptical about.

"When you do the math, it means she'd have to swim almost 150 kilometres a day," said Timothy Noakes, professor of exercise and sports science at the University of Cape Town."

An expert on extreme cold and endurance, Mr. Noakes helped train British swimmer Lewis Pugh for his famed, one-kilometre North Pole swim. "She couldn't go that fast - even if she ran across the water."

Yet previous transaltantic strokers have arguably swam at roughly the same pace, including two Frenchman - one of them with a kickboard.

Ms. Figge, a resident of Aspen, Colo., is a veteran marathon runner whose ocean-wide ambitions are more vast than her experience in the water. According to her Facebook page, one of her longest swims before this highly publicized crossing was an 83-km, three-day haul from Cay Sal Bank, Bahamas up to Marathon, Fla.

On Jan. 12, Ms. Figge set off from Africa, wearing a red cap and a wet suit, following a 14-tonne catamaran named Carried Away.

A makeshift mobile cage protected her from predators and various amoebic scourges.

"I've always dreamed about being this little thing in the big ocean," she told The Associated Press before her departure. According to the same report, she gave her captain, Billy Ray, a blank cheque with "Deposit to Swim Atlantic" written at the bottom.

Most days, Ms. Figge awoke at about 7 a.m., gorging on carbs while assessing the weather, which apparently was not helpful.

On her best day, she'd last eight hours in her six-metre by four-metre shark net; her least productive burst was just 21 minutes. The crew initially planned on mooring in the Bahamas, but was blown 1,600 km off course.

Once she arrived on the Trinidadian island of Chacachacare, however, she entered a unique class of swimmers.

A little over a decade ago, Frenchman Benoît Lecomte stroked 9,600 kms from Cape Cod, Mass., through the Azores, to Brittany - a 73-day journey. This would average out to 131 kilometres a day.

Four years earlier, a fellow Frenchman, Guy Delage, took a similar route to Ms. Figge's, but with the aid of a kickboard. His swim was unsupervised and has not been accredited.

Ms. Figge's business manager, David Higden, did not respond to an interview request, but he did tell the Guardian that Ms. Figge swam only 19 of the 24 days, and that she never set out to swim the entire distance. "Nobody could swim across the Atlantic. It's physically impossible," he said.

If traversing the Atlantic was not the team's objective, then they should not be surprised to hear that there are doubts about the accomplishment.

"In these swims, you have to provide evidence," Mr. Noakes said. "You need hour-to-hour evidence from a GPS telling us that she was there. It's up to them to prove it."

Mr. Noakes likened these athletes to mountain climbers, and the GPS evidence as the proof of their record. "You can't say you've conquered Everest until you have that photo next to the Chinese flag. This is the same issue: You need that evidence."

Paul Hopfensperger, who crossed the English Channel, also has misgivings. Like Mr. Noakes, he feels that wearing a wetsuit gives a swimmer an unfair advantage such as extra buoyancy and warmth. "People are dubious about this because it asks the question, ‘Where do you stop?' There are rules about this for a reason," said Mr. Hopfensperger, a councillor in Suffolk County, near Cambridge.

Without a wetsuit, swimmers are more prone to hypothermia, sapping them of strength that they would have if they wore some kind of protective gear. It also might fend off jellyfish stings that could otherwise lead to shock.

Best known for her superhuman swimming in frozen waters, Lynne Cox has her doubts about the shark cage, which she said can increase a swimmer's velocity 30% to 40%.

A self-declared purist who wears only goggles, a bathing cap, sunscreen and a swimsuit, the California native stresses the importance of learning what the human body can endure.

But she is also not surprised by the controversy. I can see why people are purist about this and why they should be done this way, not another" said the Swimming to Antarctica author. "But I think it's great for her to have goal like that. And if she felt needed to it that way, then she should do it."

PJH - I think we were all justified in being dubious about the legitamicy of the claim following the publication of this in Puerto Rico today:-

SAN JUAN, Puerto Rico (AP) — In stories on Feb. 1, 7 and 8, about Jennifer Figge's long-distance swim in the Atlantic, The Associated Press reported erroneously that she had swum across the ocean. Figge swam only a fraction of the 2,100-mile journey. The rest of the time, she rested on her crew's westward-sailing catamaran. Her spokesman, David Higdon, told The AP on Tuesday that her total swimming distance has not been calculated yet, but that due to ocean hazards including inclement weather, he estimates she swam about 250 miles.

PJH - Now we know why all English Channel Swims have to adhere to strict rules, and are only ratified if official observers of the CSA or CS&PF agree that the swim has complied with those rules.
Posted on Wednesday, February 11, 2009

Email ThisBlogThis!Share to TwitterShare to FacebookShare to Pinterest
Labels: Miscellaneous

i have been SO frustrated with all the publicity surrounding this story. to be a marathon swimmer means you must learn to cope with the environment which you are entering. yes, i get stung by jellyfish all summer long. yes, i had hypothermia just last sunday because the water was 4C (39F). yes, seals approach me when i'm swimming and i flirt with an attack by them constantly. but that is what it means to be a marathon swimmer. i find it highly unfair that our group of swimmers work so hard in our accomplishments which largely go unnoticed. we collectively swim millions of kilometres each year, and one person who does not regard the rules for our sport exploits what we work so hard to maintain. the media need to once again take a lesson from this and learn the rules of marathon swimming for themselves...because i cannot take another bullshit story like this one! anybody can hop on a boat for 24 days, have a few swims along the way, and say they swam the atlantic. anybody!

Julianne, thanks for the comment and I totally agree with you. In fact, the more I think about it, the whole exercise seems totally pointless and a waste of everyone's time. At the end of the day, what has she actually achieved? She has dived off the side of a boat every day, swam for 8 hours in a shark cage and wet suit, had some food, sailed forwards through the night then repeated it all again the next day. She then has the audacity to claim she has "swum the atlantic!".

Total nonsense, and I don't know why we are even getting worked up about it, other than the fact we are vigorously defending our sport. Rightly so as well!

Ah, but Hoffy, if you apply her rules, it means you completed your 2-way. Happy days.

Paul, do you remember the old one about the Chinese waiter in the Swingers club?

Hi Alistair, good to hear from you. No I don't know that one, are you going to enlighten me?

The one where he asks "You for coffee?"! You must have heard it!