Feeling the urge to swim again after 11 months out! 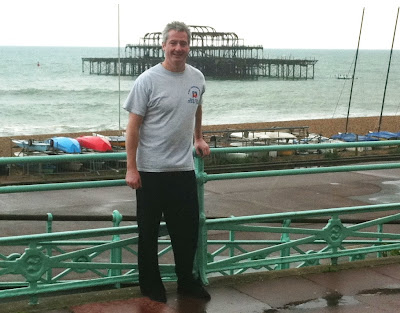 Above: Standing in front of the old Brighton Pier, June 2011, pondering my next swim.

Since March 2009, our life has been in a constant state of flux. We have had two beautiful sons, Luca and Nico, both Beccy and I have been elected to St Edmundsbury Borough Council and having changed career direction from 20 years in IT to Sports Injury/Clinical massage, I have been constantly on training courses to qualify in my chosen new career. This has taken me from Bury St Edmunds, to Grantham, to Birmingham, to London, to Dublin, and currently includes many trips to Brighton until January 2012. It was while on a trip to Brighton last month, that I decided that I needed to swim again. As I gazed across the English Channel, seeing France looming even larger than it appears from Dover, I decided on a swim I want to do, but will take some organising.

On my return to Bury St Edmunds, the first thing I did was to contact the excellent team at Culford School Sports and Tennis Centre, who once again agreed to sponsor me for my next challenge. My training base will be in the superb 25 Metre pool at Culford where it all started in 2006 when I announced to my wife that I was going to swim the English Channel. I can't believe that it was in fact 4 years ago on Sunday July 10th that I completed the first swim. Incredible how time flies!

I just have one small issue to sort out before I can start training in earnest - a hernia! I have had a small hernia in my groin for about 6 plus years. It hasn't hindered me in any way, shape or form. In fact, I swum the channel with it twice! However, due to the vigor's of my job, I have now torn it slightly and will be operated on on August 8th, followed by 10 days rest. Then it will be all systems go! For now though, I will need to start organising things to see if the swim is viable. It will be a river swim, and in Germany. That's all I want to say at present.

Off to Brighton again now. Hopefully will pluck up the courage to get in the sea. It will be tough as I haven't been in a pool or sea for all these months.