Things you have to do in Dover when you've swum the Channel, and a big THANK YOU to everyone who helped me! 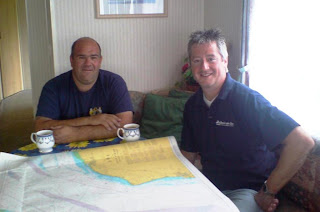 Above: Thursday July 12, 2007. My Pilot Andy King and me look at the chart of my swim in our caravan at the Varne Ridge Holiday Park. 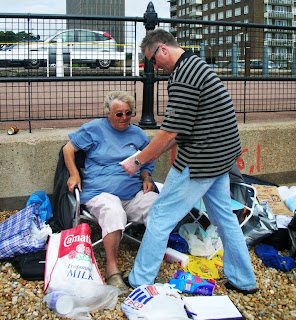 Above: Saturday July 14, 2007. Me presenting the Channel General, Freda Streeter, with two small presents to say a big "Thank you" for all her efforts in helping to get me across the Channel. You'll have to ask her what we got her personally! 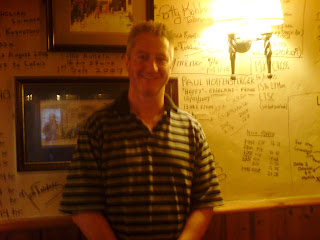 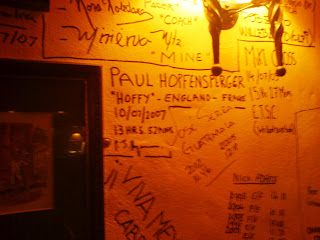 Above: Saturday July 14, 2007. Martin from The Sandown, took Beccy and I for a "Pint or Two" at The White Horse in Dover. All successful swimmers are entitled to put their names and times on the wall. There were some very illustrious names up there. Mine is now next to Mike Cross's name who is now a two time channel swimmer. Well done Mike! 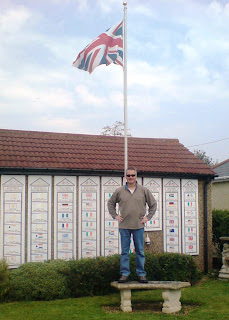 Above: Sunday July 15, 2007. David and Evelyn at the Varne Ridge Holiday Park where we stayed during the swim week, always raise the national flag of a successful swimmer, and place their names and National flag on the wall. The above was taken the day we left to come back to Bury.

As can be seen from above, it was all go for the days following the swim. Having got back to Bury late on Sunday July 15, 2007, one week later it still has not slowed down! 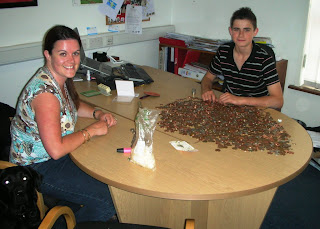 Above: Beccy and Baz count the £138.35p sponsorship money collected in a 3 litre whisky bottle at the Rising Sun Pub in Bury St Edmunds. Thanks to Bob and Jan for a great effort!

THANK YOU TO THE FOLLOWING PEOPLE

It would be impossible to thank everyone who has been involved in the channel swim personally, so I will attempt to do it here. Please forgive me if I miss anyone, there have been so many:- 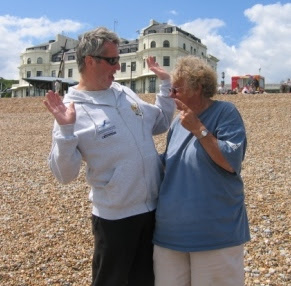 I'm sorry if I've missed anyone. But thanks to you anyway if I have.

Email ThisBlogThis!Share to TwitterShare to FacebookShare to Pinterest
Labels: Thank You, The Channel General, Things to do after the channel swim

Especially ike the bottom piccy of you and Freda!!

I'll miss this blog - wonder what your next project will be??!!

Hi Ruby - I haven't finished with this blog yet! Lots going on. "On the sofa with Leslie Dolphin" next, followed by 2000 Metre swim on Dover Regatta Weekend, August 11, and supporting Loraine on her channel swim attemp in late August. Don't stop watching this blog yet please!