Back in Dover to meet Channel Legends, Train with Loraine and train for my next challenge?? 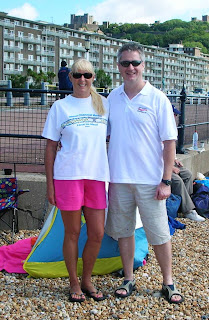 Above: Hoffy meets Anne Cleveland, now a four times Channel Swimmer with two successful solos and a double to her name. (Double - Mmm, that seems like a challenge?). 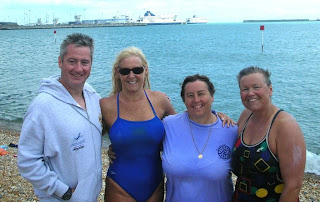 When I first started to investigate how to swim the channel in 2006, the first web site I came across was Anne Cleveland's. So it was amazing for me to meet her last Saturday when I returned to Dover to train with Loraine in preparation for her swim in August. Not only that, it was like a swimmers Hall of Fame down there with Nora Toledano from Mexico and many others. It was very International! I then bumped into Alisn Streeter and Marcy Macdonald, both very illustrious channel swimmers, and am proud to have had the photo above taken with all three. 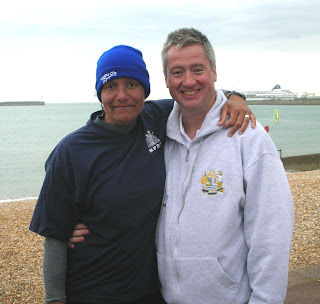 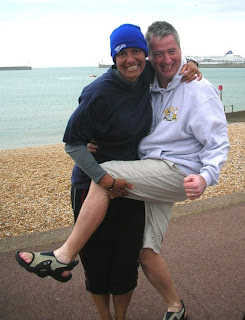 Above: Hoffy with Loraine Verghese who supported his channel swim and I will be supporting her in August.

The main reason for going to Dover, apart from the fact I was getting withdrawal symptoms after only 1 week, was to train with Loraine who I will be supporting on her channel swim attempt in the week commencing August 20, 2007. I swum for 2.25 hours total and found it surprisingly cold (Freda said it was because I had now totally relaxed after my swim). However, we had a good training session, with Loraine completing 6 hours. Go Loraine - you will do it, I know you will! You have trained for it, so there is no reason you shouldn't.

While down there, I did something which everyone has called me "mad" for doing. All will be revealed shortly!

The blog picture of the shoes on the beach in Dover is wonderful. I enjoyed the story of your epic journey! Many congratulations are in order. Most people do not realize how cold that water in Dover Harbour actually is.

I do….the black thong shoes in the picture are mine and I am on an early September Tide. Thanks for being yet another inspiration.

This has got to be voted top blog! though you are indeed a crazy individual, you are still inspiring many and your latest brainwave is quite astounding, I am very interested in how you are going to train for that one, and as for the photos of looking for your pecker in those size E speedos (e..normous) well,,, by the end of 25/07/08 it will appear you had a sex change! poor becks. keep it up mucka see you August 11th for the bosses birthday

Texas Joe - thanks for the comments and best of luck with your swim.

Mark - LOL size E speedos! They are actually a 32" waist and I am a 36" waist. Always makes me wonder how they fit! Do they fit? I don't know! It comes from my old Bury Beavers Swimming Club days, when we always wore trunks two sizes too small. The thinking then was that less material = faster swimming time. However, as the channel isn't exactly a sprint, perhaps I should now move up to 34" speedos. What do you think?

so long as they aint going to be hanging off! dont want them flapping in my face as i try to keep up at the regatta!!

Just thought I would say 'Hi' Hoffy! Mark, didn't manage swim before Egypt, typical bloke leaving everything to the last minute! Spoken to him this morning, Egypt very hot; his concern being no training this week and of course the chilly Dover waters'shocking the system on return (at least he can borrow some of my 12year old son's speedos!). Looking forward to meeting both you and your lovely wife Becky, next weekend. KGB

Hi KGB - Worrying initials! Just got back from Wissant and Dover having swum in the blistering heat! It was hot, but obviously not as hot as Mark is experiencing! Look forward to seeing you both at the weekend. Hoff and Bex.