A visit to my landing spot at Wissant in France and "Little Hoffy" takes first dip in The Channel... 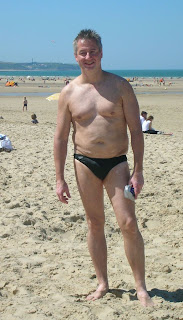 Above: On the beach at Wissant in France on Saturday August 04, 2007. This was the spot I came ashore on my channel swim day on July 10, 2007. Cap Griz Nez can be clearly seen just to my left.

Last weekend Bex, Baz and I decided to spend Saturday in France to see the spot where I came ashore at the end of my channel swim. We took the 06.25 Hrs. ferry from Dover to Calais on a beautiful sunny summers day. It was just as I remebered it, especially the houses on the sea front, although I was amazed at how far the tide was out compared to when I had landed. It must have been about 1/2 mile further out as there was not much beach on show the day I landed.

Above: the sandy beaches and sea front houses that greeted me when I swum to shore on July 10, 2007.

We had a great day in France and met up with our good friends Christine and David Palmer who were travelling back from two weeks in France. After a very calm trip back to Dover on the Pride of Canterbury ferry, we stayed in Dover to allow Baz to take his first swim in the English Channel on the Sunday.

After a very "full" full English breakfast, served up by Martin at The Sandown, we set off to the beach on what was the hottest day of the year so far. My car temperaure gauge registered 31.5 degrees Centigrade! When we arrived, we met up with Alla Cassidy who was one of the first people I met at the Open Water Swimming Championships at Tooting Bec Lido back in March. Alla was hoping to be the first Russian Woman to swim the English Channel. She swam last week and after swimming for about 12 hours in difficult conditions, she was pulled out of the water. I'm sure she will try again, but it was a valiant swim nonetherless.

Anyway, I promised Baz that I would take him in the channel and try to swim from "Swimmers Beach" to The Prince of Wales Pier and back again. He had never swum in the sea in this way before, and so I put my West Suffolk Swimming hat, goggles and ear plugs on him, and he was ready to go. I told him he looked like "Little Hoffy". So this is what I named him after the swim! 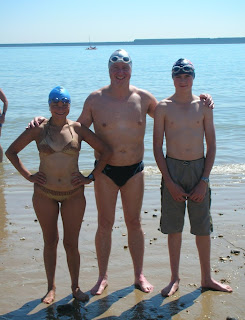 Above: Alla Cassidy, Hoffy and Little Hoffy prepare for Little Hoffy's swim in the English Channel. 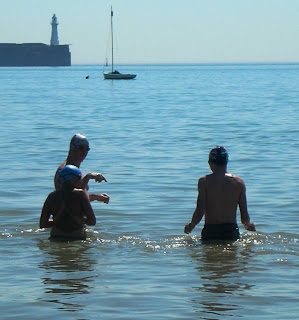 Above: Instructions before we set off. Little Hoffy is braced as he feels the cold waters of the channel for the first time! 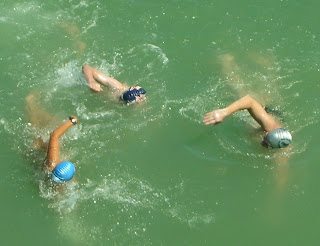 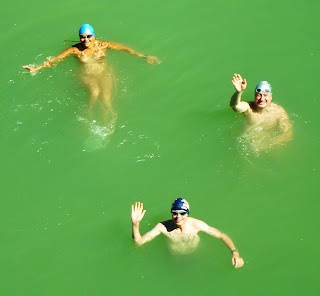 Above: Bex takes a picture of us as we reach The Prince of Wales Pier, before turning round and swimming back again (below).

About 200 metres from home, Little Hoffy started to shiver and his bottom lip was quivering. However, he kept going and I am delighted to say he completed the 900 Metre swim! I was really proud of him, especially as he is only 14 and had never swum anything like that before and he didn't give up. I could see he was determined to complete the swim. It was a great achievement and I think I saw the beginnings of a new channel swimmer emerging!

Back to Dover next Saturday for a 2,000 Metre sprint race in the Harbour. I will report back after the race.
Posted on Monday, August 06, 2007

Email ThisBlogThis!Share to TwitterShare to FacebookShare to Pinterest
Labels: Things to do after the channel swim

Small world...David Palmer used to run Youth Club at All Saints Church I went to when I was younger, Christine is the daughter of my parents good friends R + J. I was at D + C's wedding reception too Hoffy!!!

"Little Hoffy"?? You had me worried there!!

These articles are fantastic; the information you show us is interesting for everybody and is really good written. It’s just great!! Do you want to know something more? Read it...:Great investment opportunity in Costa Rica: jcondos house, costa rica beach condos, condos rentals. Visit us for more info at: http://www.jaco-bay.com/