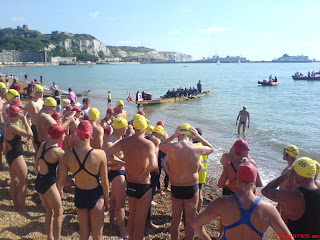 Above: Contestants line up for the start of the 2007 Dover Regatta Weekend 2000 Metre swim in Dover Harbour on Saturday August 11, 2007. The event is organised by Dover Lifeguard Club.

Saturday August 11, 2007 was Beccy's 32nd Birthday and we celebrated by having yet another weekend swimming in Dover Harbour! It is getting to be like a second home now and it was made extra special by the annual Dover Regatta Weekend taking place on the sea front. The event was organised by Dover Town Council and they really put on an excellent event.

At 10.00am, the 2000 Metres Harbour swim began, and I was swimming in the over 40's event with Mark Robson who was down for his first swim in Dover Harbour. I treated it as a very long sprint, and it was quite tough. We all swam over to the Prince of Wales Pier, and set off across the harbour, trying not to mingle or crash into The General's channel swimmers who were in training still for their channel swims. I had an interesting race with a girl in a red hat who kept swimming as close as she could to me, until eventually my elbows being slightly sharper than hers, she gave in and moved away! As I turned at the buoy to sprint for home, I was clear of any other swimmer, and came in 21st running up the beach and crossing the line. However, I was delighted to find out that I had come first in my age group (Men's over 40 event) in a time 28 Minutes 16.99 Seconds! 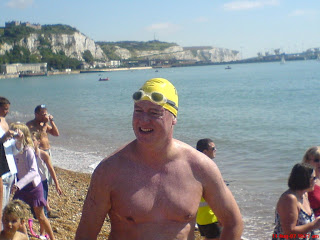 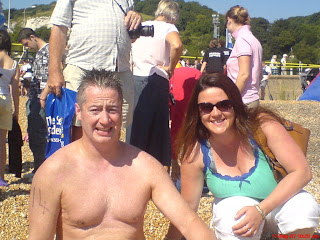 Above: Just finishing the race, and collapsing on the beach next to Beccy! 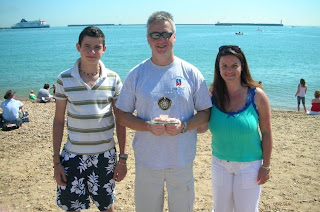 Above: With Beccy and "Little Hoffy" with my winners trophy for the Men's Over 40, 2000 Metres Freestyle event.

After a long hot day on the beach, we went out for dinner with Mark and Kelly at Cullins Yard, our favourite restaurant in Dover. When we got there Mark and Kelly gave Beccy a lovely vase for her birthday. 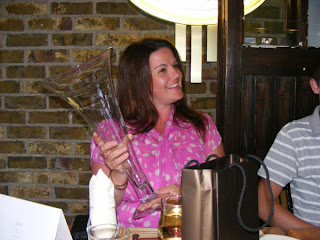 Above: Beccy is delighted with her vase, which was a birthday present from Mark and Kelly.

The next day having all woken up with slightly thick heads after a great night out, Mark and Kelly met many famous channel swimming names. Below, Andy King, my pilot and Mark's for next year, meets Mark and Kelly for the first time. 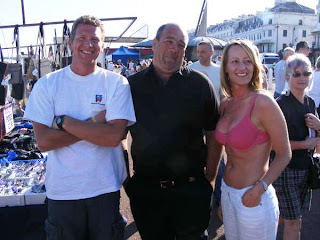 When all the heads had cleared a little, I took Little Hoffy into the channel for his second channel swim training session. This time we headed down towards the Eastern Dock, but didn't go all the way due to it being quite a bit rougher than last Sunday. 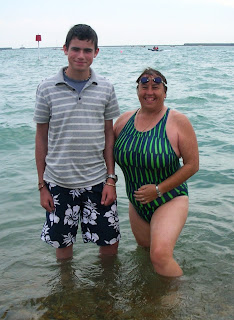 Above: Little Hoffy with "Queen of The Channel" Alison Streeter MBE. 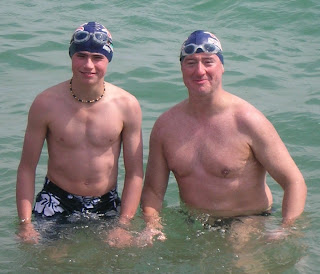 Above: A quick training session in our matching West Suffolk Swimming Club caps, then it's off for a choppy swim in Dover Harbour for Little Hoffy and Big Hoffy!

When we got back, I jokingly said to The General "Does Baz (Little Hoffy) get a 6 minute certificate for his swim today?". She laughed. About 10 minutes later, Alison said that Freda wanted to speak to Baz. When we got there, she presented him with a 6 hour swim certificate, with "hours" crossed out and minutes inserted. It says "Congratulations on your 6 minute swim in Dover Harbour". The General signed it and presented it to him, and he was as pleased as punch! 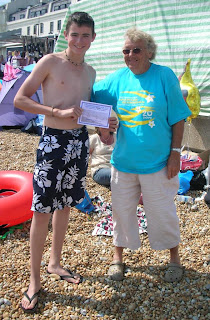 Above: The General present Little Hoffy with his 6 minute swim certificate.

We had a great weekend, and made two new friends in Mark and Kelly. Thanks very much for making it such a good weekend Mark and Kelly, and see you soon back in The Channel.

Next week, I will hopefully be back in The Channel supporting Loraine on her channel swim attempt.
Posted on Monday, August 13, 2007

Whilst I agree with the most content of this post I must emphasise that I was in the baby age group not the 40 plus with you Sir Hoff. otherwise ....top weekend thanks again

Sorry Mark, yes it doesn't read quite right does it! I meant that we were in the same race together, but I was in the Over 40's while you were in the Over 18s! Makes me sound old doesn't it!!!

Great weekend! Do you speak spanish or Portuguese by the way? No idea what the above is all about! LOL!

Damn computers, belated congrats for your great Channel achievement, Paul and your Dover Regatta championship win. It was good to see you all over the last few weekends at Dover, your second home. Big birthday congrats to Beccky and good to hear Baz has been christened with his first big 6 channel swim.

Tom - Great to see you on Sunday and the very best of British for your channel swim. I'm sure you will do it this time. Just remember Ali and Kevin's words: "Just put one arm in front of the other, and don't stop until you get to France". It worked for me!