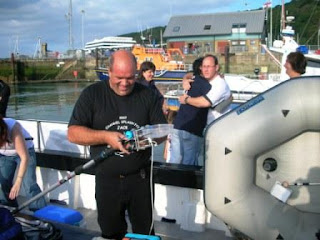 Above: Loraine's pilot, Andy King, prepares The Louise Jane for a long hard day in The English Channel, while Loraine says goodbye to Martin from The Sandown Guest House in Dover. 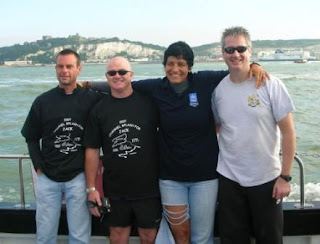 Above: Loraine and three of her support crew on board Louise Jane with Dover Harbour in the background on our way to Shakespeare Beach.

After Loraine supported me on my channel swim, she asked me if I would be her support swimmer for hers. I gladly accepted and at 06:30 Hrs. on Sunday August 26, 2007 we assembled and set off for the short trip from Dover Marina to Shakespeare Beach which was to be the starting point for Loraine's Swim. Loraine was swimming the channel to try to raise £100,000 for Jack Brown, the son of one of her work colleagues, Richard. Jack has a rare form of cancer and needs very expensive medical treatment in the USA.

Arriving at the start point of her swim, Loraine gave Richard a big hug, before sitting on the edge of the boat, jumping in and swimming to shore to be greeted by her mum, daughter, and Martin and Sonia from The Sandown who were waiting on the beach. At about 07.30 Hrs., she set off on what would be a 13 hours and 15 minutes, swim across the English Channel. 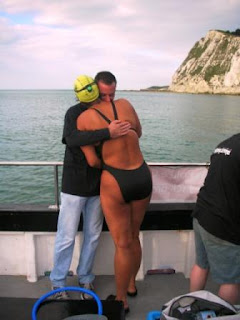 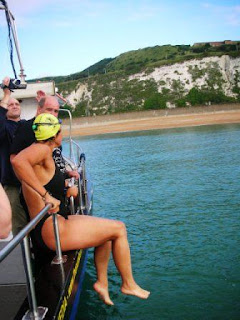 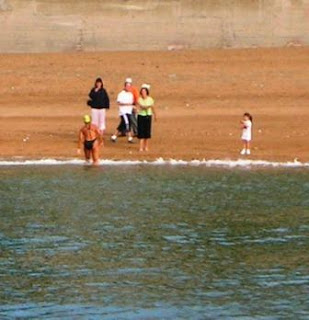 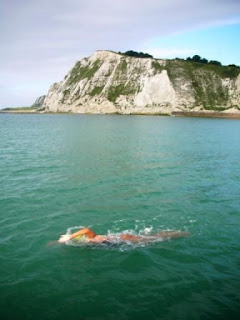 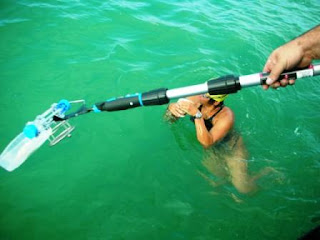 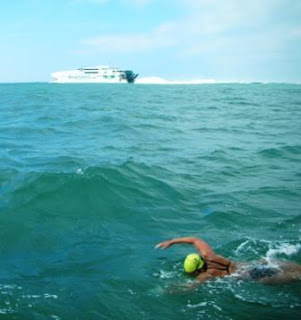 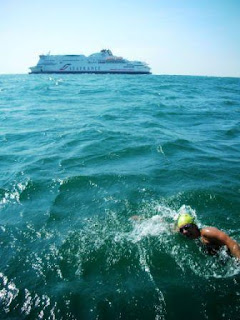 The first few hours went really well, and Loraine stormed across the channel. She barely spoke during her very quick feeds, and seemed quite happy with her swimming. She looked to be enjoying it. I helped Nicky with the feeding. Loraine fed every 30 minutes. I gave her the 5 minute hand signal at 25 minutes, Nicky prepared the feed, I stood behind the cabin door, and almost precisely on the 30 minute mark, Andy King took the feeding pole from me, leant over the edge and handed Loraine her feed. It went like clockwork.

After about 10 hours we were in front of Cap Blanc Nez in France and it seemed like you could almost touch France, we were that close. However, there was a 3.6 Knott tide now, which was sweeping us west very fast. To the very far right in the distance was Cap griz Nez. Before we knew it, Wissant swept passed us, then Cap Griz Nez, then in what seemed like no time at all, Cap Griz Nez was far to the left of us. I didn't think we were ever going to stop going west!

Loraine was now getting frustrated and knew we were going sideways. She had been on my boat for my swim, and knew the form. However, we all kept on encouraging her, and at the end of the day, she was still only about 12 hours into the swim, and was only 2 miles from the French coast. Behind us, the sun was setting, and shortly she would be swimming in the dark. Andy put the white board in front of her to ask if she needed me in as a support swimmer. She shook her head and carried on valiantly. 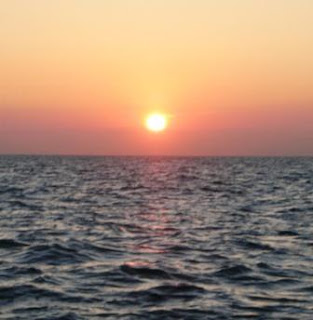 Above: The sun starts to set as we sweep round past Cap Griz Nez. 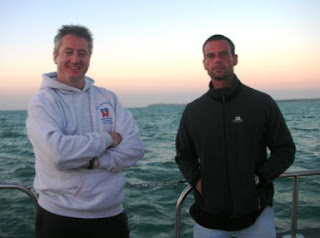 Above: Me (left) and Jack's Dad, Richard, with Cap Griz Nez clearly in the background which was now to our left. 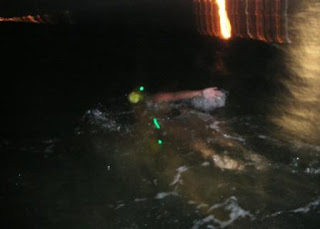 As night fell, Loraine was getting very emotional and frustrated. We just didn't seem to be getting any closer and she knew it. However, we were inching forward very slowly. Night fell and she changed her goggles for clear ones so she could see better.

Eventually, Andy McGrath put the dinghy into the water and set off towards the shore with Loraine swimming very strongly beside it. It was pitch black, and I held a very large torch which I pointed towards the shore. It was a very rocky section of France, and in the very far distance we could just see Loraine's head, which had a green light on the back, moving on the land. She had done it! 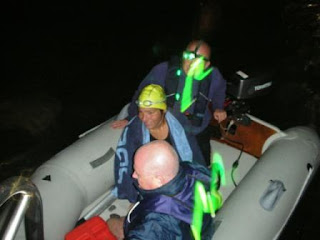 Above: Loraine returns from the French coast in the support dinghy now as "A Channel Swimmer". 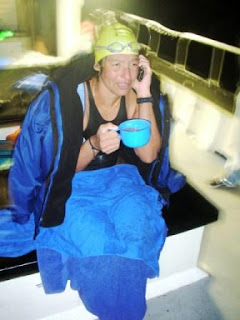 Above: The newest Channel Swimmer Loraine Verghese sits on board the Louise Jane after her successful channel swim.

It was a fantastic day, and a fantastic experience to be on board boat and just watch the channel in action. It is a beast of a stretch of water, and experiencing those tides working against a swimmer really taught me alot.

Well done Loraine, you did a fantastic job, and I was proud to be there and watch you.

Email ThisBlogThis!Share to TwitterShare to FacebookShare to Pinterest
Labels: Feeding in The Channel, Support Swimming

Great Job Loraine, never doubted you for a moment, enjoy the bubbly !