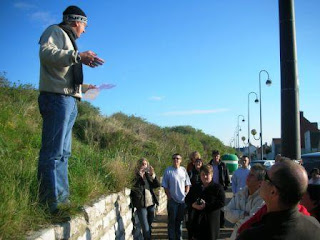 Above: Trip organiser and tour leader for the day, Cliff Golding, at Sangatte, France at 10.30am, Saturday October 20, 2007 - Rugby World Cup Final day.

When Cliff Golding mentioned in July 2007, the month of my channel swim, that there would be a French re-union in October after all the swims had finished, I had no hesitation in booking my place. What I didn't realise when we booked it, and I'm sure Cliff didn't either, was that England would be playing South Africa in Paris in the Rugby World Cup Final on the very same day.

Having stayed at The Sandown in Dover the night before, we queued up at The Eastern Dock to board the 6.25am ferry to Calais. When we arrived, you never saw so many England Rugby fans in their replica shirts just waiting to get to Paris and be part of the atmosphere and rugby fever that had gripped the nation.

We arrived at the rendezvous, the church at Sangatte, at about 10.15 am, where Cliff gave us a warm welcome, explained that we had lost Scott B. Richards who had flown all the way from the USA to be with us, and proceeded with the tour hoping that he would catch us up later. We started the trip on the beach at Sangatte, then got into our vehicles to start our slow drive in convoy along the coast stopping at Cap Blanc Nez, Wissant (my landing spot) and then finally Cap Griz Nez where we would stop for lunch. 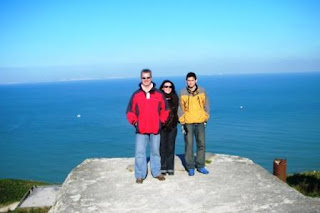 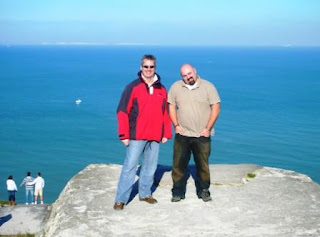 Above: Standing on the cliffs at Cap Blanc Nez with (top photo) me, Beccy (my wife and channel swim feeder), little Hoffy, and bottom photo, Damien Westray (The Rev) who's neck hasn't been the same since his mammouth 18 Hour 53 minute channel swim! 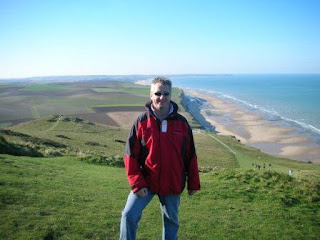 Above: At Cap Blanc Nez with my landing spot at Wissant in the background (just behind my head) and Cap Griz Nez in the very far distance. 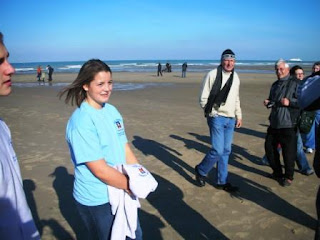 Above: One of this years youngest channel swimmers, 16 years old Megan Forbes (04-09-2007 - 14:27) on the beach at Cap Blanc Nez. It was a stunningly beautiful day, with clear blue skies and a cool breeze coming in off the sea. 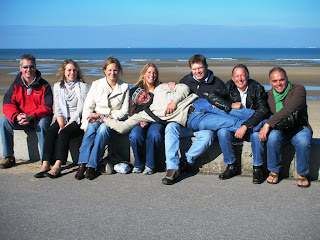 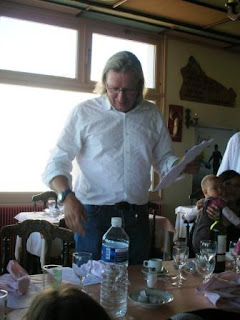 Above: After a veritable feast at La Sirenne restaurant at Cap Griz Nez, at which Scott B. Richards finally caught up with us, master of ceremonies, Cliff Golding, ends the trip with one of his masterful speeches. 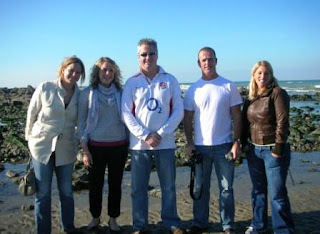 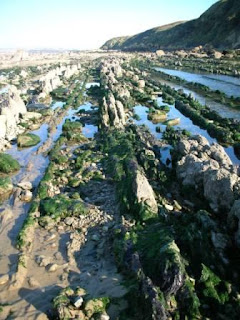 Above: The extraordinary "beach" at Cap Griz Nez. It was good to see this as I will remember it if I happen to land there next year. When the tide is in, it really must be quite unpleasant to swim over that! 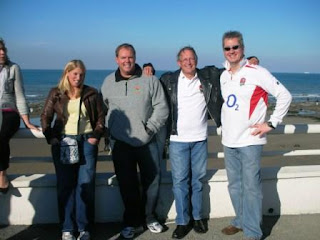 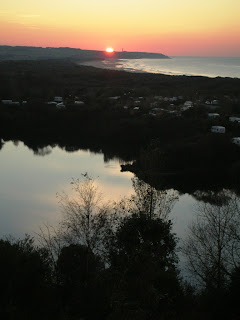 After saying our goodbyes, most people went back to Dover to watch the Rugby World Cup final at "The White Horse". We had booked to stay at the beautifully situated Le Vivier Hotel in Wissant for the night and watched the game in a small Restaurant in Wissant surrounded by many French people cheering on South Africa. It obviously worked because we narrowly lost!

I would like to thank Cliff and Laura for organising the event, and hopefully I will be back next year as a "two-way channel swimmer". As we watched the sun go down over Cap Griz Nez from our hotel balcony window (above), it almost felt like the whole chapter of my first channel swim had come to a close, and the next one was about to begin. There was just one more thing to do to fully complete the event, which was to collect my certificate on Saturday November 03, 2007 at Dover Town Hall. More on this will follow shortly.
Posted on Sunday, December 02, 2007

Email ThisBlogThis!Share to TwitterShare to FacebookShare to Pinterest
Labels: French Re-union, Things to do after the channel swim

Thanks for message, Im looking forward to swimming it again and dreading it at the same time if you know what i mean. Training is going well appart from yesterday where i had to drag myself to the pool had a day off from college and the idea of sitting watching day time tv seemed great ! but i went and felt better after it. Today i felt fine so i suppose it was just an off day. Hope your training is going well i would have loved to have done a 2-way years ago but i will do well if i get to France next year! lol
Hope your finger is getting better i seen the picture on the swim forum and OUCH!!!