Swim training severely hampered by a tin of dog food! 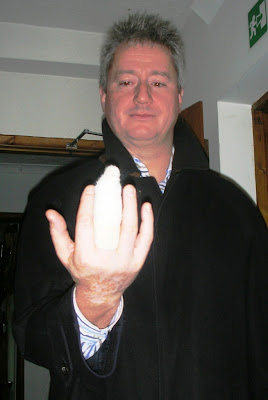 Above: The fattest finger you ever did see after severing a tendon on my right hand middle finger on Tuesday November 06, 2007.
Having returned from a swim in Dover Harbour on Saturday November 03, 2007 I was all fired up to start my swim training the following week. Normally on a Tuesday evening, I swim at Clarice House in the 20 Metre pool there. Unfortunately, this particular evening, I had to attend the Mildenhall Road Estate Community Association AGM in my role as a local councillor. Rushing home to wach a TV programme, I opened the back door to be greeted by our dog Casper who was waving his tail thinking it was food time. I grabbed a tin of "Chappy" dog food, lifted the ring pool lid, put a spoon down to the bottom of the can, and twisted the spoon sharply to access the food. Just as I did, Casper nudged the tin. The lip on the inside of tin, coupled with the turning movement of my hand, ripped through my skin right down to the bone, and blood spurted everywhere. I looked at it, feeling no pain and knew it was serious.

I shouted for my wife who came running while I held the two sides together, and she bandaged it up. I left it until the next morning where I spent about 4 hours in casualty, was lectured by a very nice surgeon about the state of the NHS in England, and was informed that I would require an operation to repair the tendon, but there were no beds and so I would need to have nil by mouth that night, then return to hospital the next day for the operation. I was seriously not happy. Not for any other reason than I was worried about my two way channel swim! All I asked was "When can I swim again?". The surgeon replied "Not for at least 4 weeks". I was distraught.

I spent all day Thursday in hospital, having had nil by mouth, not even a glass of water, since 10.30pm the night before. At 5.00pm I was operated on, and a large 1.6mm diameter steel pin inserted right down the midle of my finger to keep it straight while the tendon, which had been repaired, was allowed to heal. I was thoroughly depressed. 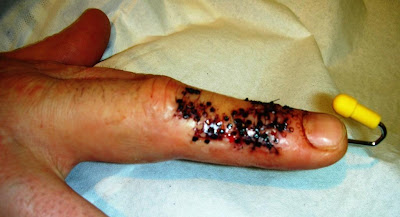 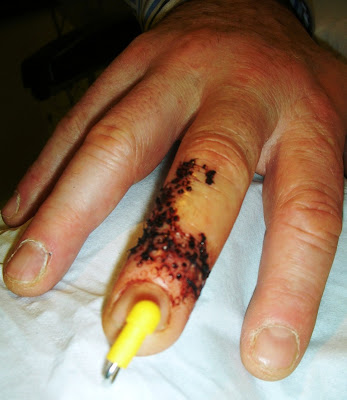 Above: The finger on November 13, 2007 after having the dressing removed to check the healing process.

On November 13, 2007, I attended my local doctors surgery to have the dressing changed, where the full extent of what I had done became apparent. The photos above clearly show it in all it's glory!

I have now had the steel pin removed, but the end of my finger is still very sore, swollen, and it actually looks like it has been sewed together twisted! I have no idea if it will ever be the same again, but at this moment in time, it doesn't feel like it.

Last night I got back in the water for the first time since my dip in Dover Harbour on November 03, 2007. It felt very strange, and my finger did not feel good on the final pull through when doing front crawl. I therefore spent most of the time with hand paddles on, which felt more comfortable. 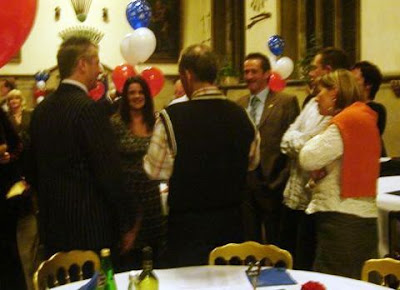 On December 28, 2007, I will be swimming in The North Sea in De Panne off the coast of Belgium with a 2008 Belgian Channel Relay team I met at the CSA Dinner in Dover on November 03, 2007. I am apprehensively looking forward to it, if that makes sense. It has been a very tough 6 weeks, and it will take a monumental effort to complete my two way, but I will not give up. The one thing that gives me hope is something Tim Cheeseman said to me when we were in France in October. He said "I never start swimming until January each year". The reason this gives me hope is that he did the channel, and about 3 hours back again this year attempting a two way, and I am slightly younger than him! (No offence Tim!).

Well, after that depressing story, I wish you all a Merry Christmas, and a Happy New year, and I will be back to form as soon as is humanly possible. I promise!
Posted on Wednesday, December 19, 2007

Hi 21CM - Yes that's right. I will be in the North Sea in Belgium on December 28th. The Belgian Air Force are doing a fly-by and they are trying to get the press there. I hope I can swim a bit as my finger is not good.

Have a great Christmas, and look forward to maybe seeing you on Saturday?

Picklesgrandma asked me the other day what you had done to your finger ( I have my spies), now I can show her in all its gruesome detail. That was even worse than the toe episode on another blog around here.

Ha! Hi PM. Just got back from the "bloggers" party - where were you? We thought you would be there! I have two questions:-

21CM - Great to see you today at the party. I've only just realised wat you are talking about re the "Mohican"! It's in the Belgium photo! Ha Ha! Well spotted, I hadn't noticed.

Don't rub it in about me missing the party. I was very upset about THAT. I did email the hosts to let them know we had been summoned elsewhere that day.

I did tell you who my parents were, when I saw you in Bury. Allegedly I look EXACTLY like my mum, except she doesn't do CROCS, and my Dad has known yours for YEARS!

PM - Shame about the party, it was good. No one said you weren't coming when I asked, so I was expecting you to walk in any moment! Never mind, we'll have to wait till next year!

Still don't know who your mum and dad are though! I'll have to keep guessing.

I've just filled the form in and paid the second deposit for next year's two way channel swim. It's now only 9 months to go, and I am seriously behind with my training due to my finger, which incidently still hurts, and I cannot bend it! Worrying times...

Nice to see you yesterday too, even if it was only for about 5 minutes. I came home and watched two pantomimes back-to-back on TV with the kids which was a very poor consolation offer.

I hope everyone had a lovely time and it was nice to meet Beccy, if only briefly. ;-D