The first dip in The North Sea for 2008 at Aldeburgh, Suffolk, a chilling experience! 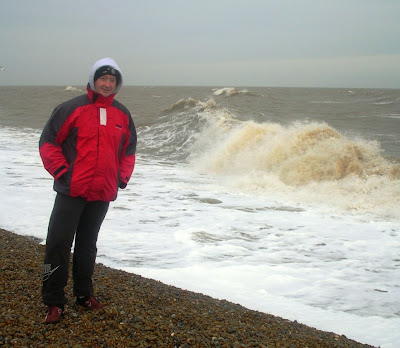 Above: Apprehensively standing on the beach, thinking about swimming in The North Sea at Aldeburgh, Suffolk, Sunday January 13, 2008.

This week has been a good two-way channel swim training week, with three sessions in the pool giving no problems with my finger, and my first visit to the gym since June 2002 when we trained for our Great Wall of China Trek. All it needed was a dip in the sea to continue to acclimatise to the cold water for the channel, and for the World Cold Water Swimming Championships at Tooing Bec in February. I have felt back in the groove again this week, after such a prolonged and enforced lay off. So off we went to one of our favourite seaside haunts, Aldeburgh, one of the most easterly towns in England, and one of the prettiest.

We arrived and parked the car, and had some of the world famous Aldeburgh fish and chips from "The Galleon" fish and chip shop. I thoroughly recommend them and it is worth visiting Aldeburgh just for the Fish and Chips! I was somewhat apprehensive about getting in the sea for some reason and walking from the sheltered high street onto the beach, I knew why. The wind howled across the sea shore and I could hear the roar of the sea clearly. It was very loud.

As we stepped onto the beach, and looked at the sea, I couldn't believe it! It was really rough, and I thought that even if I did get in, which I didn't want to, there was no way I could swim in it. Looking around for any possible sitings of dorsal fins from our alleged and elusive "Great White Shark", I walked along the beach with Beccy, and said "I'm not getting in that". "I don't blame you she said". Thankful that it was all over, and I wasn't going to swim, I relaxed and went to a local cafe for a hot cup of coffee.

Leaving the building, I said to Beccy, "I'm really angry with myself for not getting in the sea. That's what we came here for". She looked at me and said "Well get in there then!". I stood by the car and contemplated things. It was bitterly cold on the beach, and I really didn't fancy getting in. However, if I returned home without getting in, I would be really angry with myself. I opened the car boot, grabbed my bag and headed back to the beach. 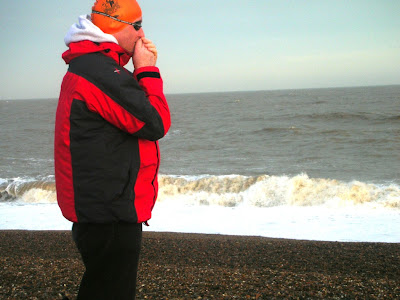 I put my swim hat, ear plugs and goggles on, which meant I had to get in. Didn't it? My hands were already cold, and I didn't want to get in. How was I going to get in that water? I know, I thought of Freda, the Channel General, standing there giving me a bollocking for not getting in Dover Harbour on time at 9.00am. That would do it! I stripped off, put my Oakey flip flops on, which I had only found earlier that day having lost them since my channel swim, and walked towards the water.

As my feet touched the water, it was cold. Very cold, but I continued to walk in as the waves started to approach me with great force. 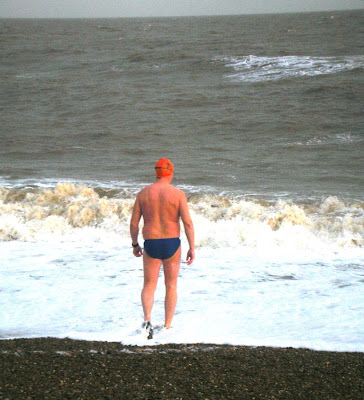 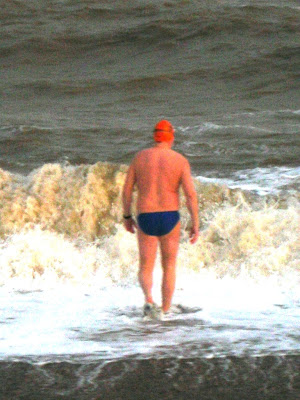 Before I knew it, a wave hit me, swung me round with great force, and knocked my Oakey flip flops straight off my feet! It took my breath away, but I couldn't stop laughing. The force of the sea and the cold was incredible, but I was in! Yes! Thank you Freda! A great mental bollocking which got me into the water even from 200 miles away! 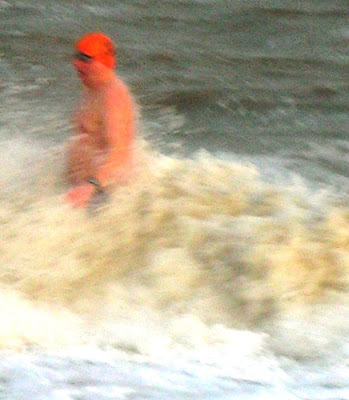 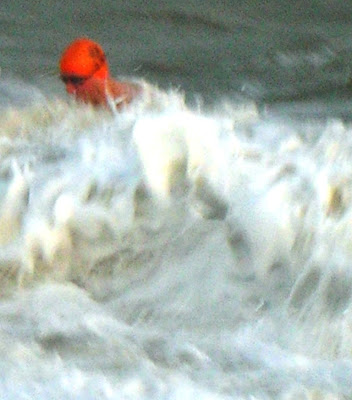 I ran out and told Beccy that I had lost both flip flops and we laughed as having lost them for 6 months, I had only found them earlier in the day, and then I had worn them for the best part of 53 seconds before they were swept out to sea. They were last seen heading towards Gothenburg in Sweden. If anyone finds them, they're mine! 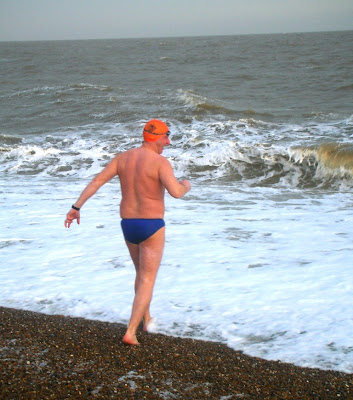 I ran back into the water for another dip, but it was very cold. However, at least I had been in the sea again, and put another tick in the box towards sea acclimatisation. Tooting Bec, will be about 3 Degrees Centigrade. The sea at Aldeburgh was about 8 Degrees. I will have to get back in there for a bit longer before the World Championships I think!
Posted on Sunday, January 13, 2008

Wooo hoooo well done Hoffy !!!
I'm contemplating going Loch swimming at the weekend but notice I said contemplating...but I don't want to lose my flip flops so might not lol

Glad your finger is better though, keep up the good work.

Hi Maggie! Long time no hear. Loch swimming sounds mighty cold. It will take a lot of contemplating! Just think of Freda shouting at you though. You'll soon get in! LOL!

If you see two beige Oakey flip flops floating up in Scotland - they're mine! They are photographed right at the bottom of this blog.