Last swim of 2007 in the North Sea at De Panne, Belgium with the BBV Belgium 2007 Channel Relay Swim Team 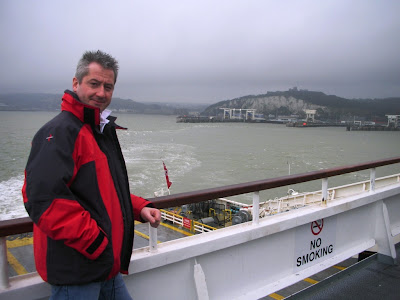 Above: Leaving England for the last time in 2007 with Dover Harbour, the forum for so many fantastic swimming experiences and memories in 2007, clearly in the distance.

On December 27th, we set sail from Dover, on a heading for Dunkirk with two aims in mind. Firstly, to have an enjoyable new year's break, and secondly to meet up with three members of the BBV Belgium Relay team who crossed the channel in 11 Hours and 17 Minutes on July 31, 2007. I had met them at the CSA Dinner in Dover on November 3rd, and we had arranged to meet at 11.00am on Friday December 28, 2007 at the Hotel Iris, De Panne, Belgium where we were staying.

Sure enough, at 11.00am Jean-Pierre Deckmyn, Chairman of the BBV Swimming Club, Frank Couke, a member of the relay team, and their wives, arrived at the hotel. Greetings over, we headed for the beach.

Once we had strolled across the main road in De Panne through the ever increasing new high rise appartment blocks which have been built in recent years with views of the North Sea, we arrived on the promenade and, with the tide being out, we began the long trek across the beach towards waters edge. As we got closer and closer, with the cool wind blowing across the beach from the North Sea, butterflies were beggining to emerge in my stomach. Not having swum much since my finger injury, I was unusually apprehensive. How cold was it? Would my finger hold out? Would I be able to stand the cold after so long out of the water? The list was endless. We began to undress, and there was now no turning back. 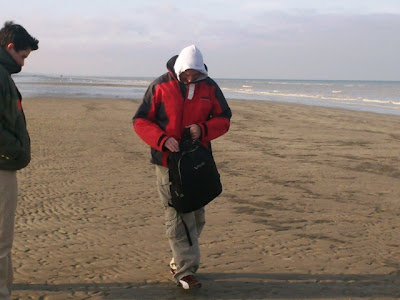 Above: Little Hoffy, wrapped up warmly as any sensible human being would be on a cold late December day, watches Hoffy start to prepare to enter the North Sea. 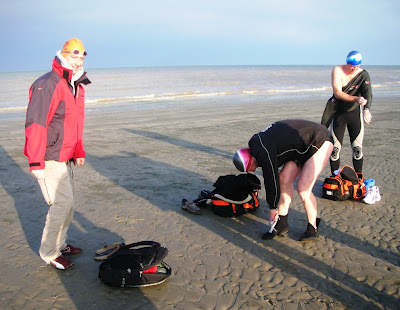 Above (Left to Right): Hoffy, Frank (putting on wet suit boots) and Jean-Pierre (opting for a full wet suit without the boots though). 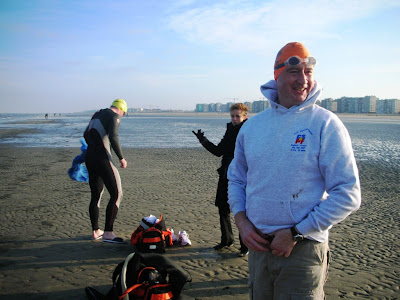 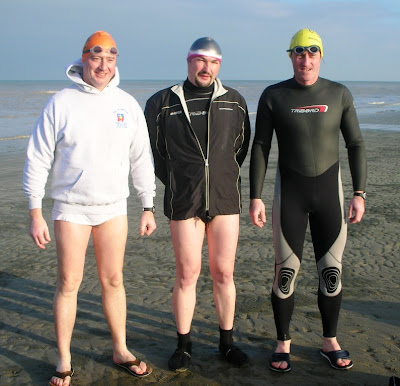 Above: Hoffy, Frank and Jean-Pierre just before entering the icy waters of The North Sea!

So, finally, everyone being ready, we said our goodbyes to our loved ones as one by one we walked towards the water, and slowly walked into the icy waters of the North Sea. 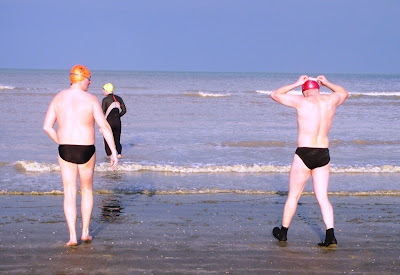 As my feet entered the water and we started the long walk into the sea to get to an area deep enough that we could actually swim in, I was struck rigid at just how cold it was. My feet went instantly numb. Then after another 10 Metres, my shins. Another 10 Metres, my knees, until I looked at Frank who was cupping his manhood saying how cold it all was! LOL! I laughed, started to splash water on my body, then dived forward into the North Sea. All my senses left me, my face and head went instantly numb through my swimming hat, and I surfaced trying to get my bearings. It felt absolutely freezing. Colder than anything I had been in before, but it couldn't have been as I had swum at 7 and 8 degrees before with no problems. 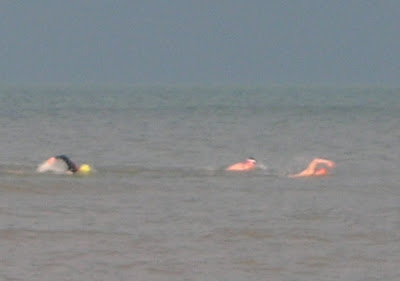 We had decided to aim for a yellow post on the beach, but at this temperature, I doubted we would make that distance. I looked at the temperature gauge on my watch which was now dropping from 20 Degrees Centrigrade. Down it went, 16.4, 14.2, 12.5, 10.1, 9.6, 9.2, 8.8, 8.4, 8.2. From the time we had entered the water, until the time my watch read 8.2 Degrees Centigrade (46.76 Degrees Farenheit), 15 minutes had passed, and I couldn't stand it any longer. My whole head and face felt like I had an "Ice cream headache". This was the worst bit, my head and face. My body felt fine. In all my Dover training, I had not experienced cold in my head and face like this before. I stopped, bobbed in the water for a couple of minutes with my head out of the water, then stood up and started the long walk out. My damaged finger was really throbbing from the cold, and continued to do so for about an hour after the swim. 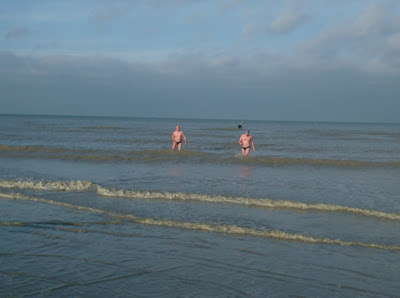 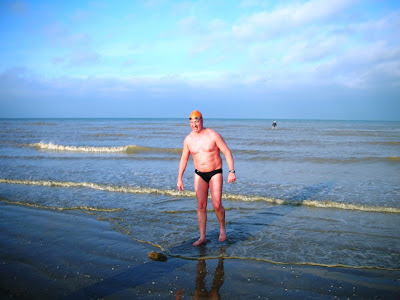 Above: Frank and Hoffy start the long walk out, but Jean-Pierre in the wet suit, stays in a little longer.

Just as I was being handed my towel and B.L.D.S.A. hat I heard a helicopter in the distance. It was a helicopter and rescue diver from the Belgium Air force. Everyone on the beach stopped and looked, and I forgot all about the cold as we watched events unfold. Watch the short video below for more info... 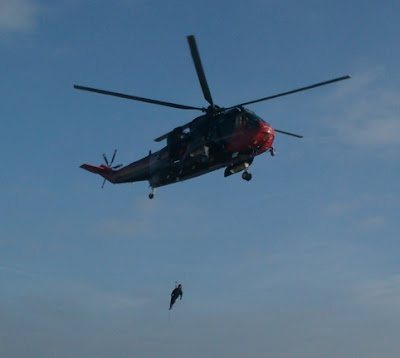 Above: A Belgium Airforce rescue diver makes a dramatic entry onto the beach in De Panne, to the amazement of all onlookers.

The diver certainly knew how to make an entrance! He stopped and chatted for a few minutes, then as quickly as he had arrived, he left by the same means! 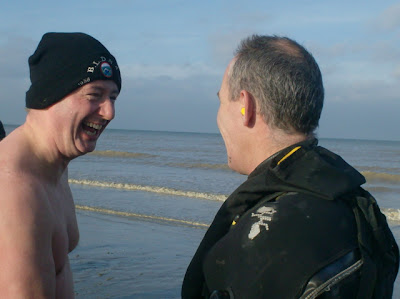 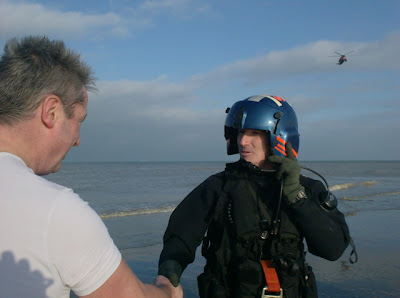 Above: A short video of the resue diver leaving in the same manner as he arrived, by being winched up into the Belgian Air force resue helicopter.

After a long walk back up the beach to our hotel as the tide seemed to have gone out even further and a quick shower, we all met up at a restaurant we have visited many times over the years, "Robinson's" in De Panne. 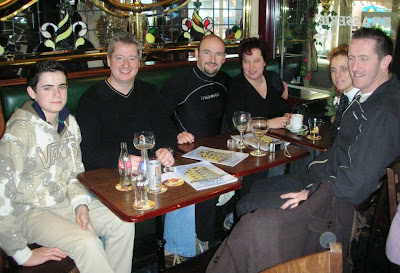 Above: A well deserved after swim beer in our favourite restaurant in De Panne, "Robinson's". Left to Right: Little Hoffy, Hoffy, Frank Couke, his wife, Jean-Pierre's wife and Jean-Pierre Deckmyn, Chairman of the BBV Swimming Club. Photo by Beccy Hopfensperger.

Well, it certainly was a dramatic end to a fantastic year, and I would like to personally thank Johan, Jean-Pierre, Frank and their wives, for making us so welcome and putting on a fantastic morning's swimming for us. We have made new friends in Belgium, and we look forward to seeing you all again soon.