An invigorating 7.5 Degree Centigrade dip in the North Sea at windy Felixstowe 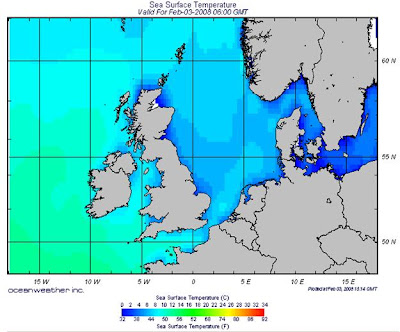 With only one week to go to the World Winter Swimming Championships 2008 at Tooting Bec, I thought I had better get in the cold water again to continue the aclimatisation process. The sea temperature at http://www.oceanweather.com/ showed the sea near Felixstowe to be around 7.5 degrees centigrade today. So off we went to Felixstowe to do what I thought was going to be a good cold water swim. Wrong. When we got there I was greeted by this:- 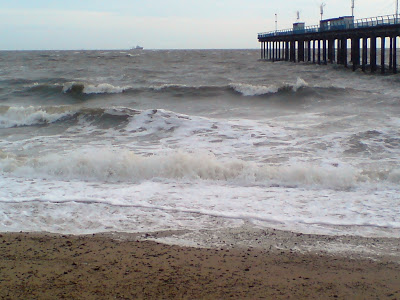 Having read an article last week about 'The Ice Bear', Lewis Pugh on how he prepared mentally for his swim in the sea at The North Pole, by superheating his body using mind techniques, I got in the car in Bury St Edmunds wearing my skiing hat, gloves, scarf and big overcoat, turned the heaters on and sat there for 45 minutes while Beccy drove the car, and I attempted to superheat. I thought about the desert, swimming in the Mediterranean, all sorts, but on arrival at Felixstowe, I was hardly "superheated", just pleasantly warm. Exiting the car with swim hat on, ear plugs in and goggles on, I headed down to the beach, but was shocked at how windy it was, how rough the sea was, and how cold my face was with the bitter wind coming in off the North Sea. 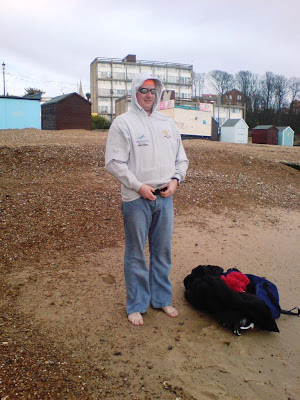 Above: No messing about this week like I did at Aldeburgh two weeks ago. I just stripped off and walked straight in.

On the beach I was totally focussed on getting in. I stripped off and walked straight into the sea. It was bloody freezing and incredibly rough, but I just carried on in. A couple of waves took me under, and I ran out laughing to see a crowd gathering on the promenade pointing, and laughing. Beccy was fiddling wth the camera, and I turned round and went back in again. 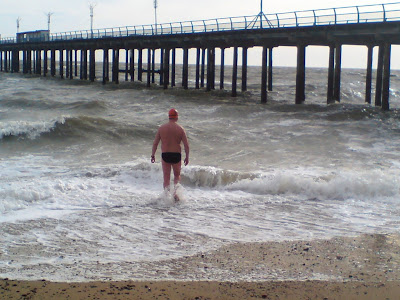 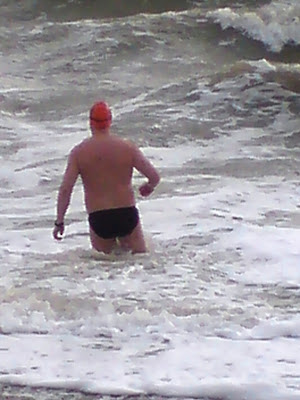 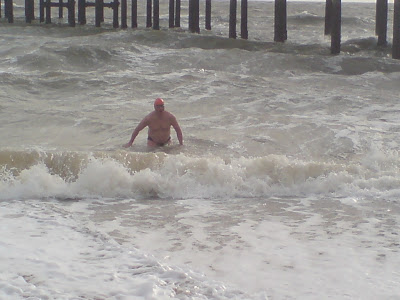 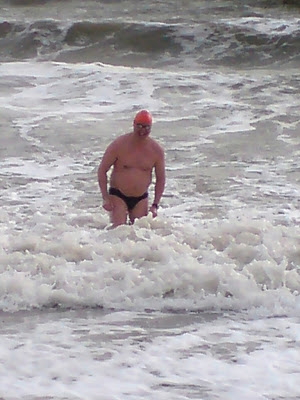 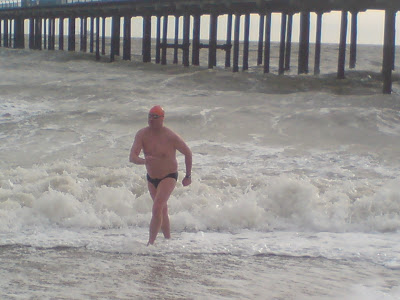 Above: Unable to swim due to the sea being so rough, but a good bit of cold water aclimatisation for next week's World Winter Swimming Championships nonetheless.

I was pleased with my efforts, and although my feet were numb for about 45 minutes afterwards, and my injured finger was throbbing for the same period of time, it was a worthwhile trip to the coast, and we had a good lunch and glass of red wine afterwards!

Thanks for message hope your well and your finger is a lot better. Training is going good and i am kinda looking forward to going to Ireland in May lol this was so much easier when i was younger lol

Good luck at the winter championships I'm sure you will do great !!

Good to hear from you. You stick in there and keep doing your stuff. Forget about the worries in the world and focus on the channel. I know you will do it!

Thanks for the good luck, and don't worry about age. I think I am a better swimmer now than when I was younger. Not faster, just better; mentally, emotionally and physically. Take from the past and invest it in your future. You WILL SUCCEED!