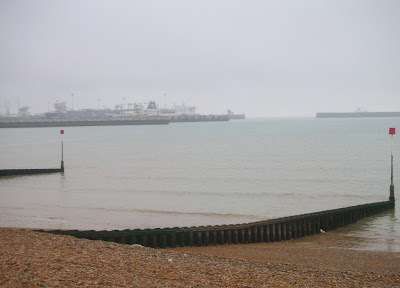 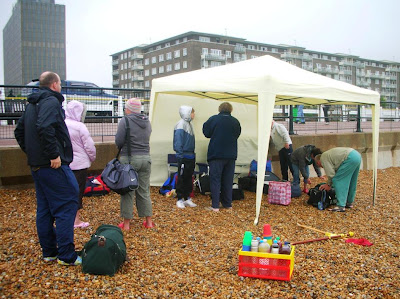 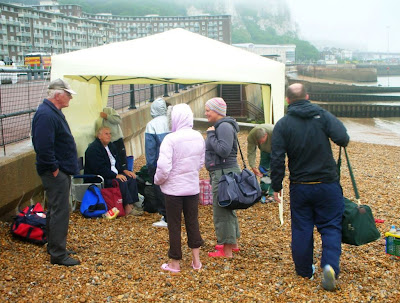 Above: Swimmers Beach on a bleak and dreary 'Mid Summers' day 2008.

I had been waiting for the phone call from Mark Ransom to say he was swimming the channel on Friday June 21, 2008. However, when we got the call, it was to say that it wouldn't be happening this weekend. So off I went to Dover, on my own again this week as Beccy was running in the Cancer Research UK "Race for Life" in Bury St Edmunds.

When I arrived on Swimmers Beach, it was a horrible, misty day with fine rain falling. After helping Barry and Freda put the tent up, to protect her from the inclement weather, I was given 7 hours, and put my new Aqua Sphere swim hat and goggles on. After a year of searching, I had now found the perfect hat and goggles for me. The hat comes down over the ears, which helps protect my right ear from what has been a very niggling little ear irritation for some weeks. The General gave me hat number 1, which I put in my bag and set off on my swim, thinking that I could remember "No. 1" when I come in for a feed. I set off on the swim, being the first person to enter the water. It was quite pleasant at about 15 degrees centigrade, and I felt quite good.

After 2 hours, I came in for a feed, and Barry handed me the Maxim, and Irene took the register. "No. 1" I said, and swam off for my next hour. When I got in for my second feed, The General came storming down the beach, shouting and waving her arms at me. All I could see was her lips moving, I couldn't hear a thing due to by excellent hat keeping out all sound as well as the water. Eventually it turned out that I was to wear a red hat not my silver one for whatever reason. The General went up to my bag, got out the red one, then told me I had to wear it. There was no way I was taking off my silver hat, so I took off my new goggles and put on the red hat over the top of my silver one. Then, disaster, I lost my goggles. I searched but could find them anywhere, so I ran up the beach, reached into my bag, pulled out my old pair, ran back down to the water, and set off. I was absolutely fuming! It was only the second time I had worn those goggles, and they weren't cheap at £16.99! I continued swimming.

At 4.5 hours, I started to feel "ill". I had not felt like this before in the harbour, but my arms felt weak, and I had two projectile vomits which looked like blood in the water, although it was probably Maxim. Not being one to quit, somehow I kept swimming and eventually reached 7 hours and 20,000 Metres, and got out and had a massage with Louise. I then went back to The Sandown B&B and was in and out of consciousness all night on my bed.

Getting up next morning, I had the "thick head" from hell. I felt like I had a hangover, but without the alcohol! I decided to drive home, because I felt so bad. The whole way home, I felt like I was having an "out of body" experience. I was "floating". I got home, and had a really good 2 hour sleep, still having a splitting headache when I woke up. I then got the phone call....

Mark Ransom, will be swimming the channel at about 1am on Tuesday morning, June 24, 2008! I unpacked my bags, and started to re-pack them ready to get down to Dover again on Monday evening.

The next blog will hopefully be all about Mark's swim.

GOOD LUCK MARK FROM EVERYONE IN BURY!!!

Hope your feeling better best of luck to Mark will be thinking about him, hes got great support with you im sure he will do well

Thanks Maggie. Feeling about 95% now thnks. Not sure what it was. Will send Mark your best wishes.