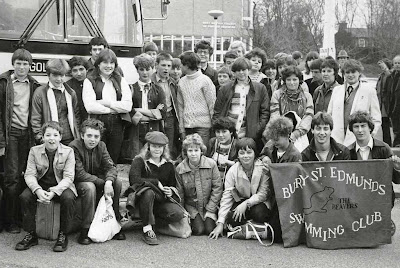 Above: Bury St Edmunds Swimming Club ("The Beavers") before leaving for a swim trip to Kevelaer in Gemany in 1982. Mark Ransom (12) is seated on the bottom left at the front. I am kneeling down holding the banner, 2nd from the right on the front row. I was 19 at the time. Photo (c) Bury Free Press 1982.

I think that both Mark Ransom and I enjoyed last week's 2 x 3 hour 20 minute swims, but we were we were quite certain that this week was going to be much tougher. We both had to qualify for the channel by doing a 6 hour swim. Mine was not so urgent, but Mark will be swimming in only 3 weeks time. I felt quite emotional for him in a funny way, as it was a big day, and I couldn't believe that someone I had swum with all those years ago, was now about to attempt to jump from 1 hour, to 2 x 3 hour 20 minutes swims and then the following week, come straight in with 6 hours! I kept thinking about the photo on my living room wall with 12 year old Mark sitting at the front with a big grin on his face. I have reproduced it above.

Arriving on 'Swimmers Beach' after the 145 mile drive, we undressed and waited for instructions from The General. "Hoffy, Mark - 6 hours" came the roar across the beach. We 'Vaselined' up and got into the water. 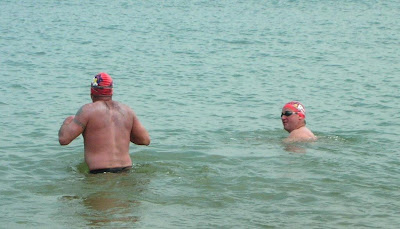 Above: Mark Ransom (left) and me getting in for the start of our 6 hour channel qualifying swim.

We set off and did the same route as last week, which was out to the Eastern Dock, 4 lengths of the harbour and back in for a feed. This was a distance of about 6,060 Metres in about 2 hours 20 minutes. The water temperature wasn't too bad at 14.9 degrees Centigrade. It's amazing how the surface temperature warms up when you get a bit of sun on it. 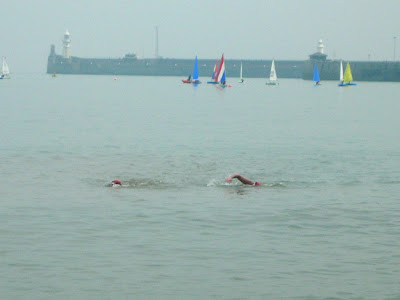 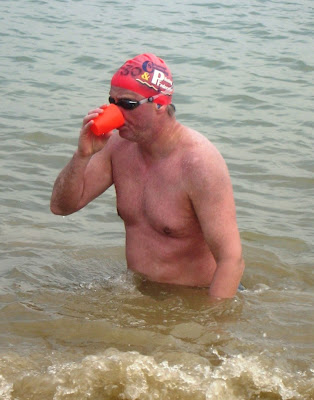 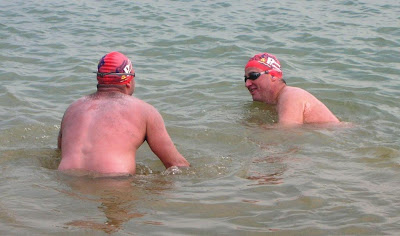 Above: Swimming across the harbour, in for a feed, then off for another two laps.

Before we got in, I said to Mark that he shouldn't think about swimming for 6 hours, we just swim to the next feed. We have to think of it in laps followed by feeds, not distance or hours. Just laps. After the first feed, it was just out to the Eastern Dock, 2 lengths of the harbour, then back in for a feed. Another 3,860 Metres completed, and 3 hours 20 minutes gone. Next time, out to the Prince of Wales Pier, two laps, then in for a feed. 3,260 Metres and 4 hours 10 minutes gone. We then finished off with 2 x "triangle circuits" of the harbour (Eastern dock, across the harbour to Prince of Wales Pier) in for a feed and 5 hours, then 6 hours 3 minutes and we completed the swim, both qualifying for the channel! 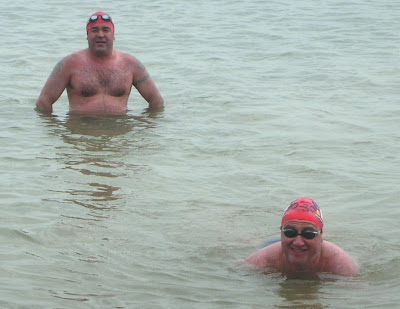 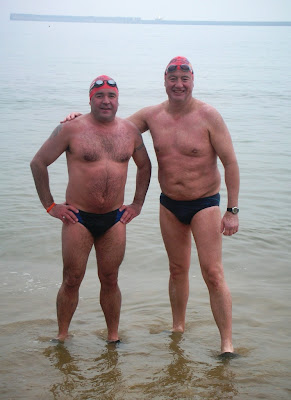 Above: Channel Qualifiers! Mark Ransom (left) and Hoffy at the end of their 6 hour channel qualifying swims.

It was tough, and we were both shattered afterwards, but we had done it! The General congratulated us, then we all went of to Cullins Yard for a well earned one and a half pints of Guinness and some nosh! Before we went, The General asked me "Who was slowing down for who?". I wasn't sure what she meant. She said that we were both swimming exactly the same speed and someone must be slowing down for the other one. I hadn't thought about it. We just got in, swum together and completed 6 hours and 18.1KM. That's all I knew really. She smiled. This was worrying.

That night, I laid on the bed rigid, and could barely move my arms, my back and shoulders hurt so much. We watched the finals of "Britain's Got Talent" and "I'd do Anything". I just laid on the bed, unable to speak or move. At about 10.15pm I said to Beccy "I'm going to sleep now". She told me the following day that she said "OK", walked about 2 Metres to the sink, then heard me snoring! I had just passed out! Little did I know then, that the next day would be even tougher than today...

Arriving at Swimmers Beach at about 08.40am the next day, I felt as though rigor mortis had set into my back and shoulders! "Hoffy - 5 Hours" came the call from The General. Then something unexpected happened. Nick Adams, a 31 year old Maths teacher from Eton College and one of only 4 English people to have completed a two-way English Channel Swim, walked over to Mark and me and said "Morning Boys". (We are both older than him!) "I'm swimming with you today". "Excellent!" I said. "Why's that then?" I asked inquisitively. "Freda asked me to". Now I was worried. "What was going on here" I thought to myself. I didn't have to wait long to find out.

Getting into the water, I explained how we were going to swim over to the Prince of Wales Pier, then do four lengths and in for a feed. This normally took just over two hours going this route which was about the right time for a feed. "2 hours?" said Nick Adams looking surprised. We headed over to the Pier.

Arriving at the Pier he said "Right, come on then boys, follow me" in his best school master's voice. We obeyed. We shot across the harbour like a bloody rocket! Nick in front, me behind his feet, and Mark behind mine. Arriving at The Eastern Dock, I was panting heavily. "I don't think I'm going to be able to keep that speed up for 5 hours" I said nervously. Nick looked at me and said "Right, off we go!". We shot across again faster than the first time I think.

Arriving at the Pier, I said "How long are you staying in for Nick" hoping he was going to say that he was getting out now. "I'm not sure" he replied. "Come on, off we go!". We shot across again, the muscles in my arms now seriously starting to ache and feel heavy. While I was full flat out going across the harbour, Nick was bobbing up and down, doing a bit of backstroke, etc.. He just looked like he was playing. When we finally arrived across the harbour for the fourth time, I was knackered, I have no idea how Mark was feeling, I hadn't even got the strength to ask him.

"You boys are slowing down a bit now" said Nick. "Yes" I thought, "That would be correct. We have just swum over 4,400 Metres at Mach 1!". I could barely get my arms out of the water. "Right in for a feed, I will be doing my own swim now" said Nick. Although I have alot of admiration for Nick, like his sense of humour, and was honoured to have swum with him, and studied his toes in great depth knowing exactly how many hairs he had on each foot, I have never been so pleased to hear those words! We swum in, and when I looked at my watch, we had completed 5,460 Metres in just over 1 Hr. 42 minutes! That was 20 minutes quicker than normal for me. "It's not how long you're in the water for, it's what you do when you're in there" said Nick. I would love to have had a photo of us all coming in for a feed, unfortunately, Beccy wasn't expecting us there for another 20 minutes, and when she arrived, we were long gone!

Swimming over to the Prince of Wales Pier, It was all I could do to get my arms out of the water, but somehow we just kept going, albeit somewhat slower than the first 2 hours! When we got there, Beccy was up on the Pier and took a photo. I remember just floating there trying to wave at her. 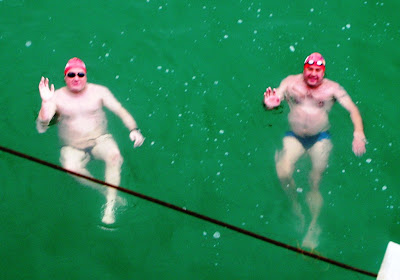 Above: Arriving at the Prince of Wales Pier after Nick Adams had left us, then below, swimming off across the harbour again. 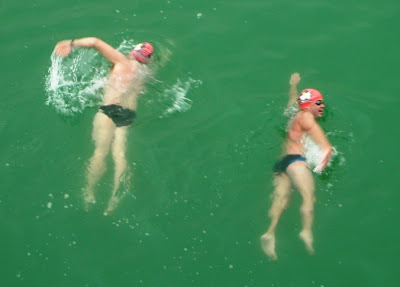 The previous day, Beccy had commented that Mark and I looked like synchronised swimmers when we swum. We had an almost identical stroke. This could be that we were both taught by the same coach, John Stemp, in the 1970's and 80's. She took the photos below, which seems to emphasise this fact. 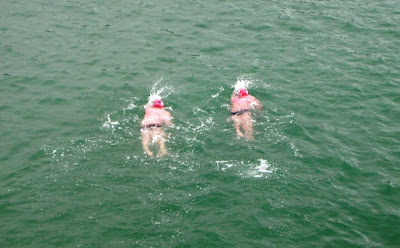 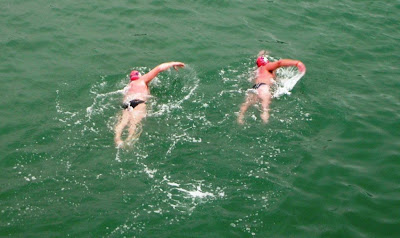 Arriving in for our 3 hour feed, there on the shore, fully dressed was Nick Adams! He had got out! As we slowly came to shore I heard the schoolmaster voice - "Come on you pair of homo's! You look like a pair of turtles swimming ashore!". I couldn't help but laugh to myself, it was like being back at my old school, Moreton Hall. That's how the teachers spoke to us there. We fed, and swum off at the same speed as we sum in at, i.e. slow with arms barely breaking the surface.

Somehow, we made it to 5 hours, and completed 14,640 Metres. I was absolutely knackered, but pleased that somehow, we had crossed all the mental barriers, including the cold (my watch read 13.1 degrees Centigrade, 1.8 degrees colder than yesterday, Kevin Murphy's read 12.5) and completed a 6 hour and a 5 hour swim on consecutive days.

Emerging from the water, The General was smiling. "I'm not talking to you!" I said jokingly. "Why?" replied the General. "Did you tell Nick Adams to push us like that?" I smiled. "Yes, you were both holding back yesterday" she said. So even way out in the harbour during a 6 hour swim the day before, Freda had been watching us, and to ensure we were swimming as she wanted us to, and to make sure we complete our respective tasks this year, she put Nick in with us today to give us a helping hand. That's why she's called "The General". She commands, and get's respect from all the swimmers.