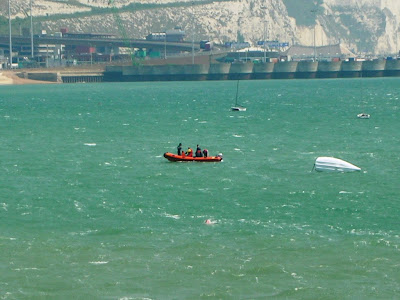 After another early start and drive from Bury St Edmunds to Dover, we arrived on 'swimmers beach' to be greeted by a very choppy harbour. It was so choppy, that the one sail boat that was in the harbour was constantly on it's side.

Two weeks earlier I was trainng with the West Suffolk Masters Swimming Club in Culford School Pool, when Dave, who was also in my lane said something about Mark Ransom swimming the channel. Now Mark Ranson used to swim for Bury in the early 1980's when I did and I had barely seen him in all the intervening years. When I looked across into the next lane, there he was! We had a good chat after training and had a conversation about the channel which it turned out, he was swimming at the end of June with the Channel Swimming Association! The end of June! It turned out that he hadn't thought about feeding and had only ever done 1 hour in the sea at Felixstowe in Suffolk. "You need to get down to Dover at 10.00am next Saturday" I said. "Speak to The General and she will sort you out". The following Saturday, he didn't turn up and I had forgotten about it until as I was undressing this week, there he was.

I introduced him to Freda, got him Vaselined up by Barry, and off we went into a very choppy harbour. Our instructions had been to do 7 lengths of the harbour and come in after 2 hours for a feed. Mark and I swum out to the Eastern Dock, crossed the harbour 4 times, then came in for a feed. 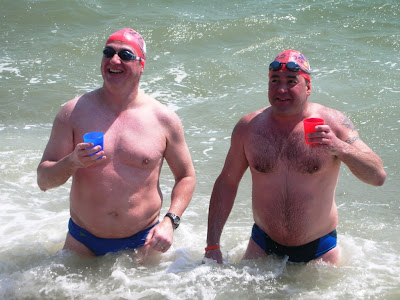 Above: Our 2 hour feed (at 2 hours 20 minutes) and Mark Ransom's first taste of Maxim. 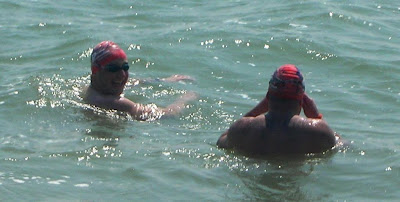 The maxim was a large one today and very warm. It was just what the doctor ordered after a very tough swim which felt a bit like swimming in a washing machine on a spin cycle. We set off again, this time across to the Prince of Wales Pier, back and forth across the harbour and back in to complete a 3 Hr. 20 minute, 9,300 Metre swim at 13.5 Degrees Centigrade. Mark was extremely pleased. "I can't believe I've just done that" he said. "Same time tomorrow" I replied. He had gone from 1 hour to 3 hrs. 20 minutes just by being guided by people on swimmers beach. 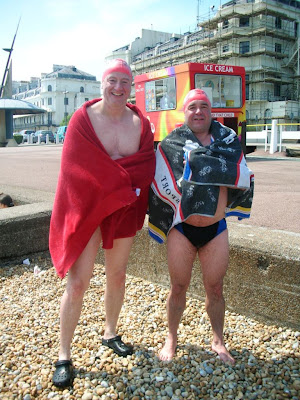 Having showered etc., Beccy and I set off on a mission to find Suva, Neil Streeter's boat which will be my support vessel for my two-way channel swim attempt in September. Having asked Alison Streeter roughly where it was, I had a very interesting conversation with a gentleman in the marina who wanted to know every detail why I wanted to see Suva. I will not go into that here as it will bore the pants off you! Suffice to say, after being lectured for the best part of 10 minutes, I went off and found it myself, smoke slowly simmering from both ears. 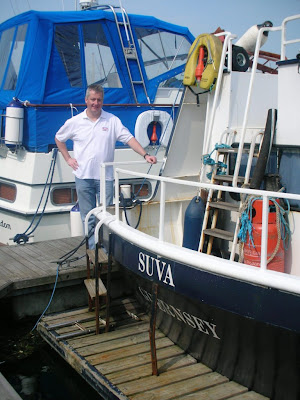 Above: Suva - my support vessel for the two-way channel swim attempt in September. 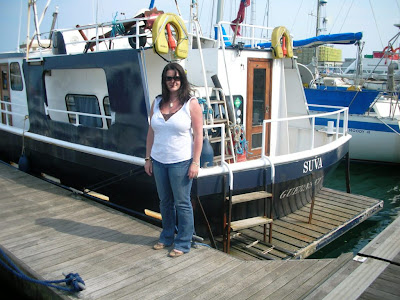 Suva looked a great boat, an entirely different type of boat to Louise-Jane who was my support vessel for the channel crossing last year, as it had a large cabin, an inside area, as well as side walk ways with shelter in case of bad weather. I am now sensing the reality and the enormity of the event having seen the support boat for the first time. I am looking forward to it immensely.

After a hearty Sandown breakfast, it was back to the harbour on day 2, for more of the same. However, this time the harbour was like a mill pond. The sun was shining down, despite the rest of the country just to the north of us, suffering an absolutely torrential downpour. We were very lucky, it had passed us during the night. Now it was a scorcher, and I had put the wrong sun tan cream on i.e. Factor 15 non waterproof rather than factor 50 children's water resistant sun cream. Having a very sensitive skin and suffering from something called "Vitiligo" which is why my skin is very blotchy, this was not good news.

Mark and I did exactly the same swim as the previous day,except we added about another 230 Metres to our swim by swimming into the beach area and along the beach rather than straight across the harbour on 2 lengths. This made our total for the day, 3 Hrs. 20 Minutes, 9,530 Metres @ 14.5 degrees centigrade. Another good swim, even if I did get sunburnt on my shoulders for the first time ever in the harbour.

After showering etc., we dove to St Margarets' Bay where we had a beer in The Coastguard pub. From there we looked across the channel and could see France and the channel in all it's entirety. The shipping lanes were incredibly busy, as were the ferries, and it was good to just sit there and contemplate the task in hand. i.e. To swim to France and back! 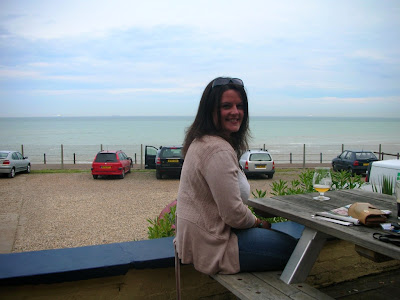 Above: Beccy enjoys a beer at "The Coastguard" in St Margaret's Bay. The tankers can be seen in the shipping lanes. 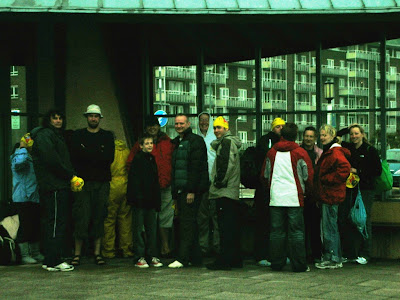 Above: Intrepid, hardened channel swimmers line up for a full cycle in the largest automatic washing machine ever invented!

If ever there was a difference in weather over three days, this weekend had it all! When we pulled up onto the beach front, I looked quite smugly at the water and thought "We're not getting in there that's for sure". How wrong I was! "Morning Freda" I said full of the joys of spring. "We're not swimming in there today are we?" I said. "Hoffy, I though you knew me" replied Freda smiling. "I do" I replied looking at her very worried. "We are swimming in there then aren't we!?" I said. She just smiled at me. I looked round and couldn't believe we were going to get in there. It was as rough as hell. Not just little choppy bits, but huge very powerful waves crashing onto the beach. 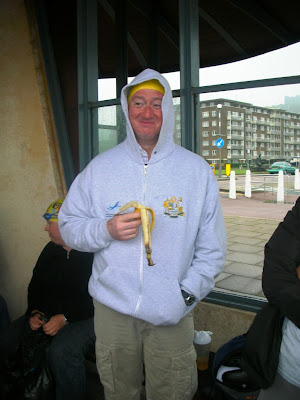 We all undressed, while Barry and Irene got dressed into even warmer and drier clothes than they already had on. They had obviously been through this before! 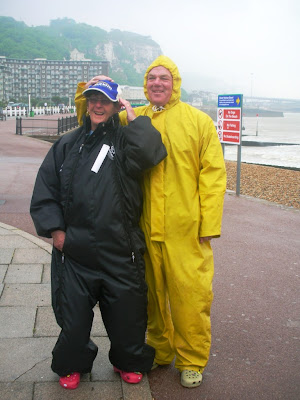 Above: Barry and Irene Wakelam correctly dressed for a traditional Spring Bank Holiday in England. 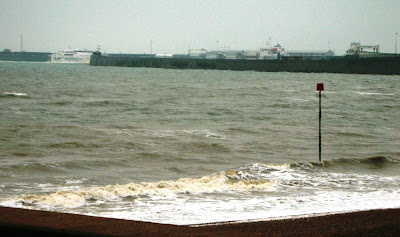 Above: The scene that greeted us as we arrived at swimmers beach, Dover on Spring Bank Holiday Monday 2008.

Sam Jones and me walked down to the beach, and Beccy filmed a 3 minute video of us trying to get into the water. All you can hear on it is Beccy laughing!

Above: Sam Jones and me trying to get into the water, before the start of our swim.

Above: Sam and me trying to get out of the water (it starts on the side as the camera operator was still laughing at us in the sea. It does turn the correct way round after a few seconds though). 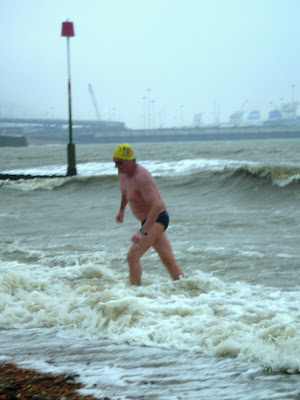 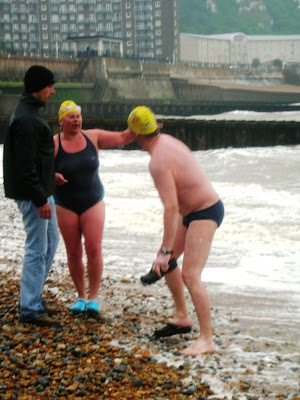 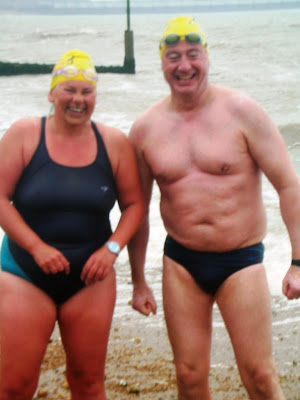 Above: Sam Jones and me after our epic battle with Dover Harbour. We couldn't stop laughing!

Having finally got into the water, we completed a 3,220 Metre, 1 Hr. 10 minute swim @ 13.5 degrees centigrade, and I have to say it was the toughest swim I had ever done. We were tossed around all over the place, but I'll tell you what, it was great fun, and I really enjoyed it, and am glad I did it!

I had my first swim as a yellow hat on the Saturday and I thought 'christ' is it like that every week? Enjoyable but a daunting snap of what it can be like!