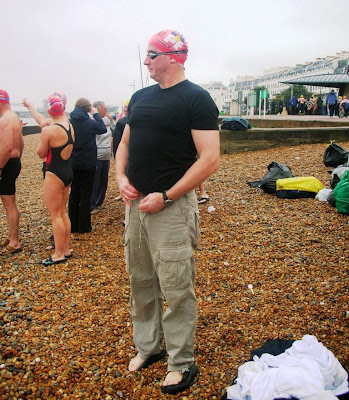 Above: Great to be back in Dover for week 3 of the season. On the beach, undressing for the first dip of the weekend.

Having got over all of the previous weekend's traumas and mental difficulties, it was good to be back in Dover and in familiar territory, i.e. the same as last year in May, grey skies, drizzle and The General sitting under a canopy only slightly protected from the rain. "Morning Freda" I said. "Morning Hoffy" she replied, and I gave her a hug. All was well and back to normal.

We all assembled, got undressed, Barry Vaselined our armpits, and we waited for instructions from The General. I fully expected to be punished for last weeks antics, but Freda said "3KM today". After getting to the bottom of things, we found out that she meant 3 lengths of the 1,100 Metres harbour. This meant, and 830 Metre swim out to The Eastern Dock, 3 x 1,100 Metres lengths, and a 520 Metre swim in from the Prince of Wales Pier, back to swimmers beach. So this was in fact a 4,650 Metre swim. 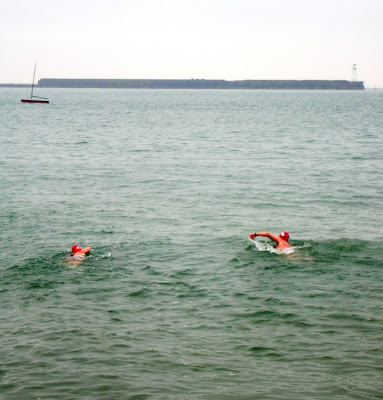 This week, I went through my usual routine of getting into the water, i.e. Step in, bend over, rub the cold water all over my body, shudder a few times as I do so, then rub it on my back before finally slipping into the icy cold water. It works for me. Others who are far more macho than me, run down the beach and dive straight in. I can't do that, and following a long conversation on Friday with Wendy Coles, fellow CS&PF committee member and someone who works at the British Swimming headquarters at Loughborough, I am told that the way I do it is better for your heart. I'm glad I'm doing something right. Thank you for the information Wendy. Even getting in like this is never easy, but I got in and started to swim out past the red marker, and on towards the 830 Metre swim to the Eastern Dock.

Heading across the harbour from the Eastern Dock to the Prince of Wales Pier, I noticed lots of yellow sails in the distance and kept my eye on them. Having turned at the Prince of Wales Pier, I headed back and found myself right in the middle of about 5 small sail boats, being sailed by children who looked no more that about 10 years old. At one stage I was totally surrounded and made eye contact with one of the boys. To the right a power boat with what I assume was an instructor on board, was keeping a careful eye on everything.

After 1.5 hours, I landed back on swimmers beach, stepped out of the water and walked up the beach, satisfied, and pleased with myself. What a difference a week makes! 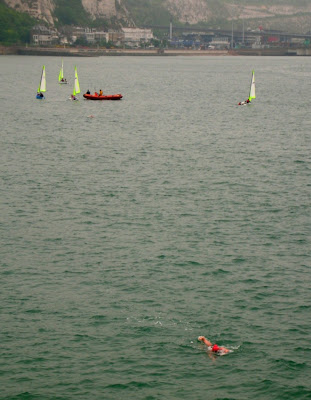 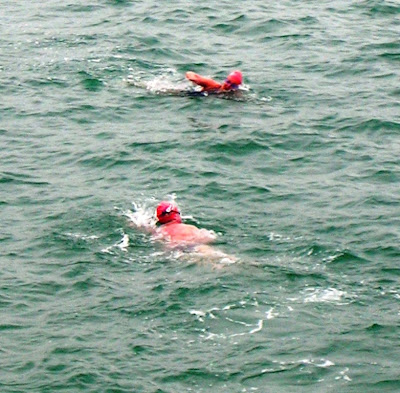 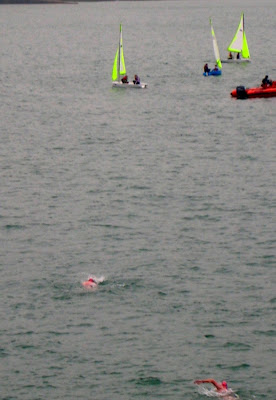 Above: Dodging sailing boats and swimmers in Dover Harbour on Saturday May 17, 2008.

After the swim, we went to Hubert House for a coffee. It's always good to chat to other swimmers after the morning's swim and exchange stories, and listen to advice, and this is where it happens. Beccy and I had a good chat with Kevin Murphy, 'King of the English Channel', and Freda Streeter, 'The Channel General' in Hubert House. Swimmers take note for next week! The last thing The General said to me smiling as we left was "It's not going to be so easy tomorrow Hoffy!". I didn't for one moment imagine that it was.

What a difference a day makes! Arriving at 'Swimmers Beach' after one of Martin at 'The Sandown's' legendary fried breakfasts, I looked at the sea and it was as rough as hell! However, the sun was out. You can't have it all I suppose. 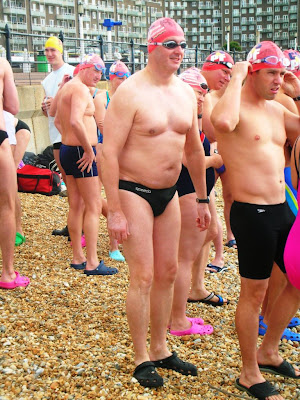 Above: Rob Telford (right) and myself listen to instructions before Sunday's swim.

Our instructions from The General was 5 lengths of the harbour, but with a maximum time of 1 Hr. 40 minutes for everyone except me. I had a maximum of 1 Hr. 50 Minutes as I am attempting a two-way channel swim. This made total sense after our conversations during the week. Walking down to the sea shore, I prepared to do battle with the sea. 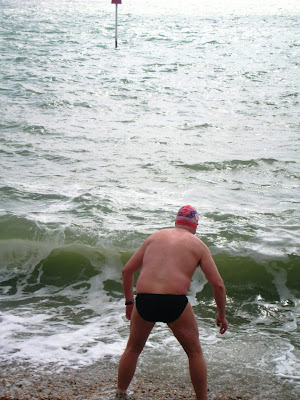 Above: Ducking and diving before attempting entry to Dover Harbour's fierce sea on Sunday May 18, 2008. 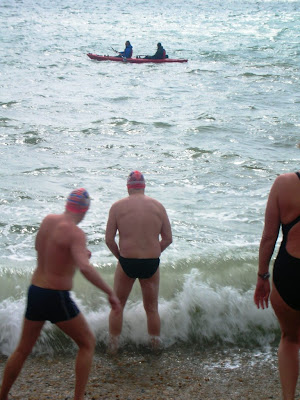 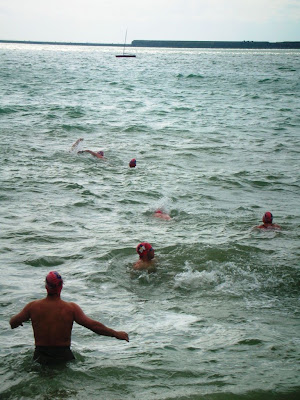 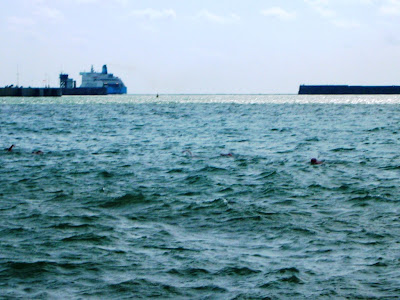 I decided to try and be one of the first in today. I mentally prepared to do battle and was about the third to brave the incredibly choppy waters. God it was rough! Unless you are in there you cannot really see or feel it from the pictures, but when you are at eye level with the sea, it is very difficult to swim in, and all you are really doing is battling to get from one side of the harbour to the other and back again etc. Today was one of those days.

Beccy took a couple of videos, one showing the general conditions in the harbour, the other showing me just really battling the conditions.

Above: The conditions in the harbour can be clearly seen by the above panorama video of Dover Harbour taken by Beccy Hopfensperger on Sunday May 19, 2008.

Above: A strange looking swimmer being battered by the waves in Dover Harbour. (Strange technique I know but you try swimming in such choppy water!).

I was cold again today, but my mental attitude was 100% different to the previous week, and I sung songs, shouted under water, crashed into two people and mentally withstood everything the harbour threw at me. Not only did it not beat me, I did an extra 10 minutes and came in at two hours to be greeted by Rob Telford who ran down the beach to tell me I had done 10 minutes more than asked. Was I cold? Yes. Was it rough? You bet. But I think the difference between last week and this week, apart from the constant temperature, was my mental attitude. Alison Streeter said to me last year that getting across the channel is 80% mental and 20% physical. From experience, I 100% agree with that.

Barry Wakelam threw my Crocs at me as I got out. I'm not sure what I was doing to the one below, but I eventually got them on after being thrown about by the waves. 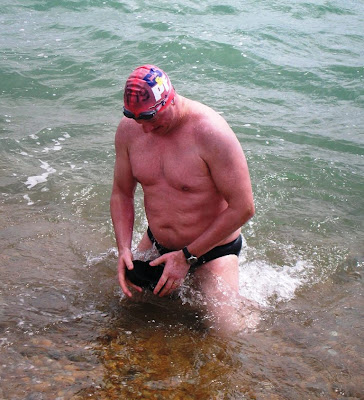 Above: Answers on a postcard please! (I think I was just trying to balance to get my Crocs on) 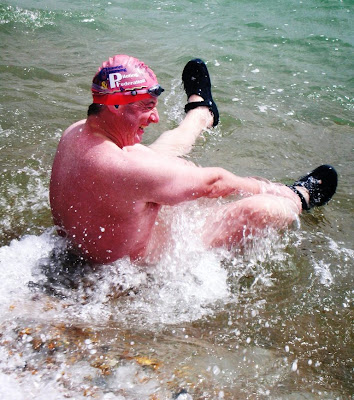 Above: ...Yes, that's what it was! Getting your Crocs on and getting out of the water after a 2 hour swim is no mean feat!

The total time in the harbour for the weekend was 3.5 hours and the distance was 10,250 Metres. A bit down on last week, but mentally pleasing nonetheless.

Next week is a bank holiday. This means 3 days in the harbour. See you all there for more of the same, plus quite a bit more I am reliably informed!
Posted on Monday, May 19, 2008

Hoffy you are my hero. I dont know how you do it. I swam in the sea on my hols and had to get in the water in the same way as you - and that was in the Med! I managed about 15 minutes most of which I spent swimming as hard as I could and staying in the same place.

Grumps - Glad you're back from hols and had a good time. I guessed it was Turkey didn't I? LOL!