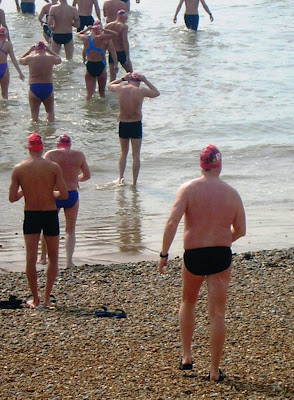 Getting up at 5.30am on Saturday morning, I was quite looking forward to spending two days training in Dover Harbour, especially as we were only able to stop for the first day the previous week. For the entire 145 mile drive down, the sun was out and it was very hot, even at 7.00am in the morning.

Arriving at Dover, I was given a red hat (this means you are a solo swimmer as opposed to yellow hats for relay swimmers) by 'The General'. The first swim was across to the Prince of Wales Pier (520 Metres) across the harbour (1,100 Metres) and back again following the same route, a total swim of 3,240 Metres. 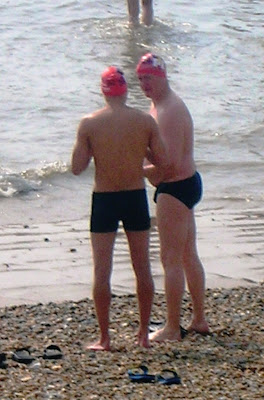 I had a quick conversation with Chris Pountney (above) before setting off on what was to be a 55 minute timed swim. During the swim, I felt quite cold. My watch measured 13.6 Degrees Centigrade, which based on the information received the previous week from The General, meant it was about 12.6 Degrees. The queen of the Channel, Alison Streeter, said I should knock 2 degrees off making it 11.6 Degrees. It certainly felt about 11 degrees. It was really quite cold. 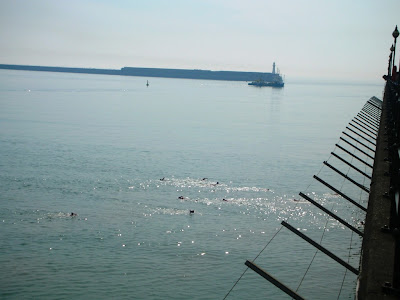 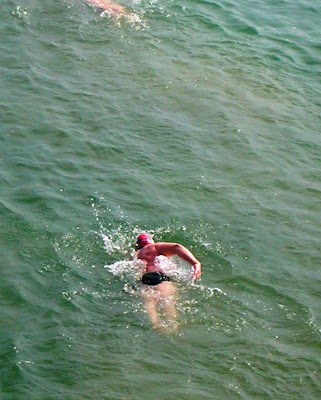 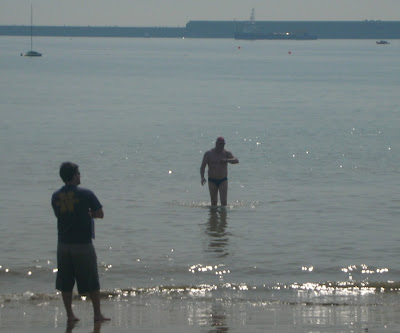 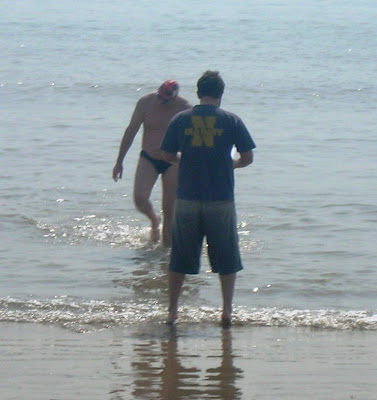 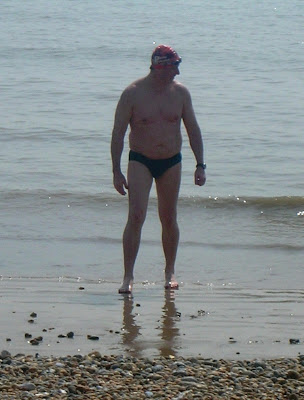 As we swam ashore, we gave our times out to the 'shingle stompers', got dressed and waited in the warm sun until the next swim at 12.15pm.

At about 12.10pm, The General gave the instructions that the next swim was to be three times across the harbour. i.e. 520 Metres to the Prince of Wales Pier, 3 x 1,100 Metres back and forth across the harbour, then the 830 Metre swim from the Eastern Dock, back to swimmers beach. Getting back in for the second time is always difficult, and this time was no exception. I got in and started to swim.

Beccy was up on the Prince of Wales Pier taking aerial photos (see below). When I arrived there the first time, I didn't stop, I just turned round and kept swimming because I was getting cold. The really weird thing was the warm patches in the harbour. When it was warm, it was really nice, but when you swum into a cold patch, it nearly cut you in half. It was such a shock to the system. 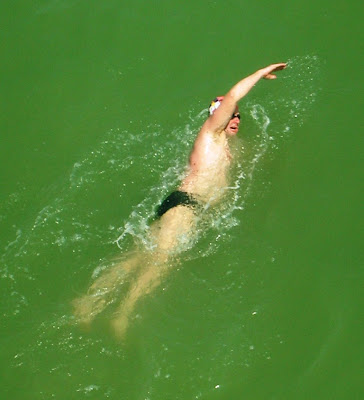 I swum across to the Eastern Dock, back to the Prince of Wales Pier, then headed back to the Eastern Dock. Half way across, I was really cold. I started to think about not finishing, but began shouting really loud under water "Come on! Keep Going" I shouted. When I finally got to about 100 Metres from the Eastern Dock, I bumped into Rob Telford who said "That will do, we're nearly there". I was so cold that all I could shout was "I AM F$#%ING FREEZING!!!". I reached the dock wall, turned around, looked up and Rob was nowhere to be seen. In fact, I was out there totally on my own. I couldn't see anyone else. I headed back the last 830 Metres and eventually came in to shore feeling really cold. It had been a 1.5 hour, 4,650 Metre swim at 12.6 degrees centigrade. That made it 7,890 Metres for the day. 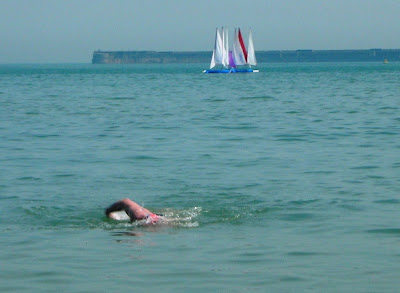 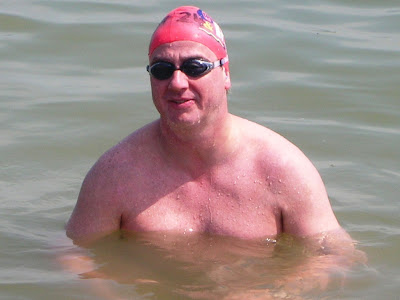 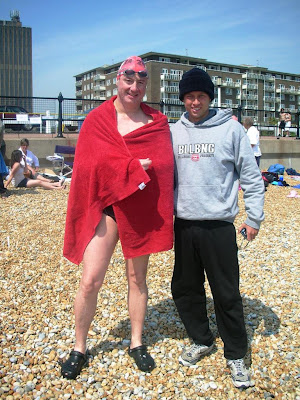 When I got out, Chris Pountney was there still shivering from his swim, which I think he said was a 45 minute swim. So he had been out of the water for 45 minutes and was still shivering. I got dressed and put my skiing hat, winter coat, and lots of clothes on, and sat on the beach shivering. I heard a girl walking along the pier say "Look at him. He's shivering!". As she walked past. she was wearing full summer clothes, i.e. Not alot! "Are you cold or suffin' mate?" she laughed. "Yes, I am" I replied. "I've just been in the sea for 1.5 hours". She looked at me puzzled and walked off. Funny sport we participate in isn't it?

Arriving on the beach for day two, I wondered what was in store for us today? It was a beautiful sunny day again, very hot, and the sea looked very inviting. All the "Red Hats" were given a 5,440 Metre swim. i.e. Out to the Prince of Wales Pier, back and forth 4 times, then back in again. Simple right? Wrong, it was bloody freezing in there!

As soon as I got in I felt colder than yesterday. The watch bottomed out at 13.1 Degrees Centigrade, which meant 12.1 Degrees Centigrade. 0.5 Degrees colder than the day before. When I arrived at the Prince of Wales pier for the second time, I was really cold. I was so cold, that I was nearly crying. Honestly, I was nearly crying. I looked up at Beccy who was on the pier taking photos. "I'm really cold" I said, hoping she would say "Are you? Ahhh. You can get out then". But she didn't. My goggles were blurred, I couldn't hear anything because of my ear plugs and she just waved at me. I turned round and headed back across towards the Eastern Dock. 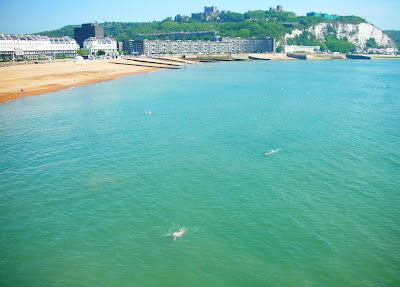 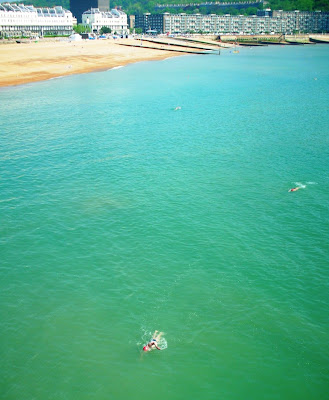 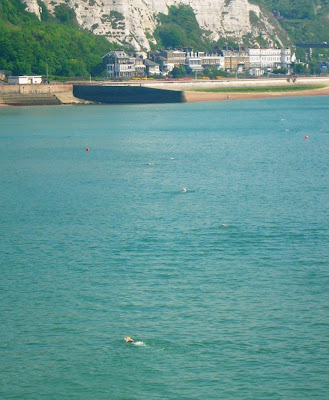 When I got there, I was in a bad state. Emotionally I was a wreck. I had never before experienced my body being this cold. I could feel it coming through my back, and it felt as though my entire skeleton was now starting to freeze. I panicked slightly, and thought that Hypothermia was setting in. I was way over by the eastern dock, with still a full width to do, and then back to the beach. Would I make it? I really and honestly didn't know. I was shivering in the water, and started to head back across. I hit a warm patch, it was wonderful, then a cold patch that shook me rigid and I shouted under water again. I swam closer to the beach, about 100 Metres out, and I felt a bit better. I was not going to let this beat me. I was going to do as 'The General' had instructed, and was not going to let her, or myself down. I dodged the rowing boats that were out there practising, and made it across to the Prince of Wales Pier. It was now back to the beach. I swam along the shore and got back at 1 Hr. 45 Minutes. 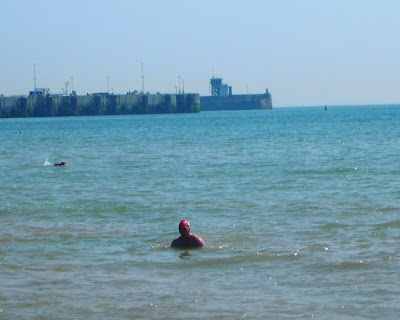 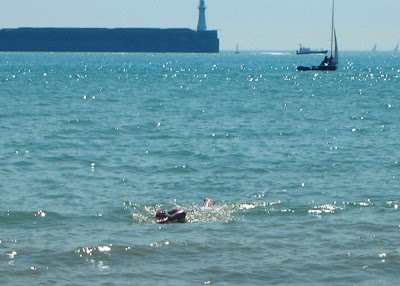 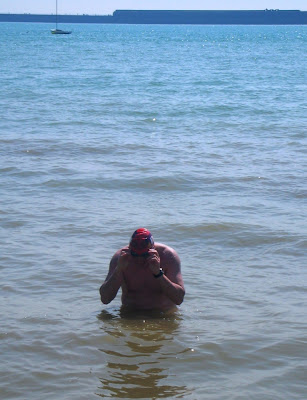 When I got there, Barry Wakelam and Louise were there waiting, along with Beccy and a towel. I could barely stand up. It was all I could do to get my balance, I was so cold and tired. However, as soon as I got out, and got the warm sun on me, It was bliss, even though I was still shivering. 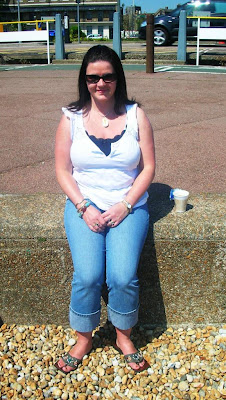 I went and told The General my story and she didn't believe a word of it! I told her how cold I was, how tired I was. Did she care? Nope! She said we were doing one last swim in about 1/2 hours time. "I'm not swimming again!" came the bold reply. "Yes, you are" she replied. "It will only be a sprint across the harbour". Nicola Millichip and Sam Jones were sitting there, to watch a debate ensue, during which time I received three bollockings! Yup, 3!

I sloped off into the corner, took the picture below, and while the General was talking to Megan, I ran! Yes, I ran to the car and drove back to Bury St Edmunds. 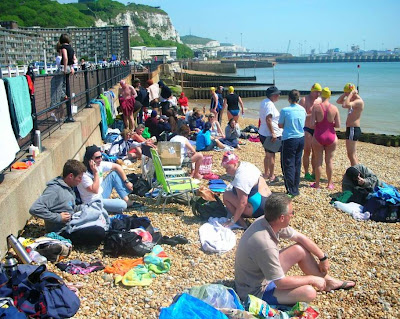 Freda, I love you, and promise to do everything you say in future to ensure I complete my two-way! I'm off training tonight with the West Suffolk Masters squad, as this is what Freda told me to do now i.e. Sprint work in the pool during the week, and the long distance stuff at the weekends. I will do as I am told, because as she said this morning on the phone, only 4 English people have swum a two-way English Channel. Freda has trained three of them.

That record speaks for itself. Who am I to disagree?