Back in Dover for the start of a new season and a swim with a seal... 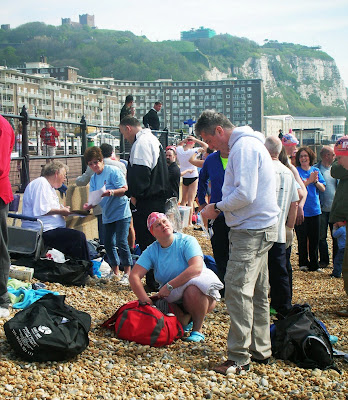 Above: Back at Swimmers Beach, Dover for the first time since November 2007, chatting to Samantha Jones. 'The General' was in her usual spot organising the 70+ swimmers.

Saturday May 03, 2008 was the first day of the new season, and setting the alarm for 6am we headed off to Dover arriving at 09.15am to be greeted by a beautiful sunny day, and a dead clam Dover Harbour. It was great to be back again!

After catching up with old friends and meeting new ones, I suddenly heard the sound of "Seal, Seal!". I grabbed my camera, and rushing up the beach with about 70 other swimmers, I managed to see a little head poking out of the water behind the "Swimmers Beach" groyne. It looked just like our Labrador, Casper in the water. I'm sure I saw a little red collar on it, and others confirmed that they saw it too. I rushed over the groyne, and managed to get the photo below, before he swam almost the full length of the harbour and disappeared. I had never seen a seal in the harbour before. In fact I had never seen any wildlife so I am not sure why it was there, but it was good to see. 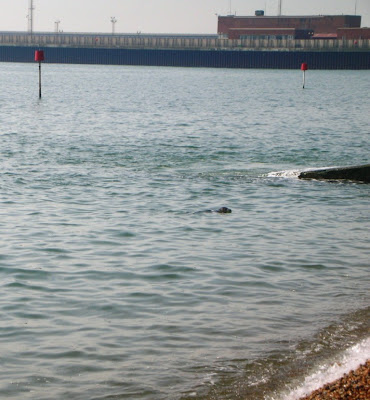 Above: The baby seal who appeared next to "Swimmers Beach" Dover on Saturday May 03, 2008. 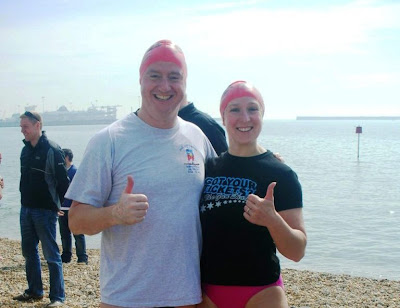 Above: With 2006 English Channel Swimmer, Nicola Millichip, prior to our first dip in the harbour.

Barry "The Shingle Stomper" Wakelam, was there as always with his rubber glove and jar of Vaseline (for non open water swimmers, it's purely for under the armpits to stop chaffing!). "Have you been home since last summer?" I asked him. "No" he replied laughing. It was good to see everyone again. 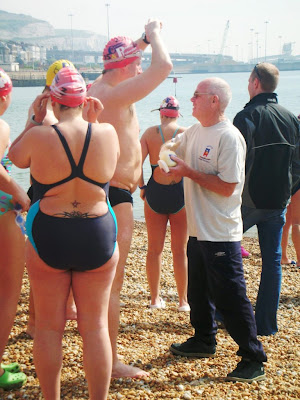 Above: Getting my armpits greased up prior to the first swim of the day. 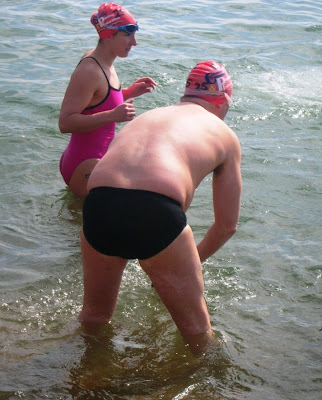 Above: Entering the icy channel with Nicola Millichip for the first of two swims of the day.

Having not been in the sea since my ill fated attempt on April 05, 2008 in Felixstowe, I bent over and rubbed the cold water over my body to acclimatise while Nicola daintily walked in beside me. It felt really cold. Especially after having been in an indoor swimming pool all of the last month. Eventually, I took the plunge and set off. I put my face in the water and within 30 seconds, "ICE CREAM HEADACHE!". Damn, this was really annoying me. My last three swims in cold water I had suffered an Ice cream headache. I was determined to beat it, and beat it I did. By the time I had reached half way to the Prince of Wales pier (about 250 Metres) I was swimming normally with my face in the water and not feeling any side effects. 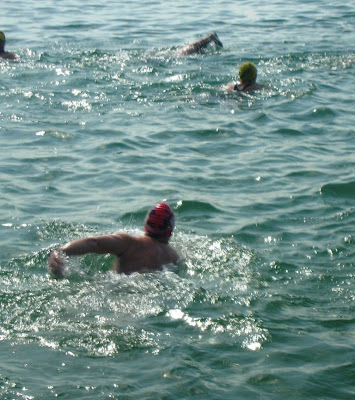 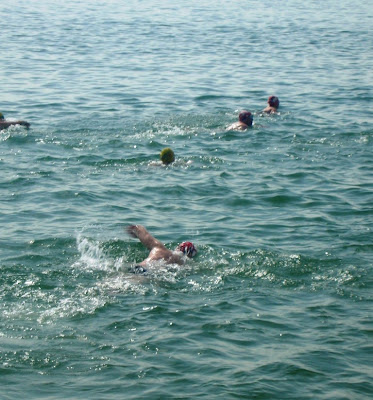 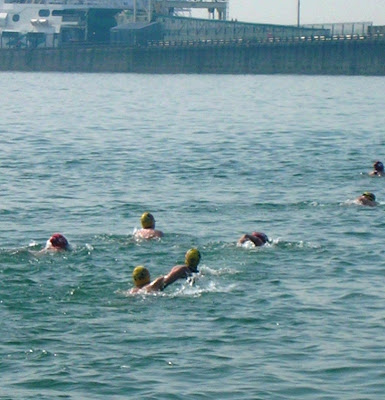 On the way back from the pier, I really got into a good rhythm, with bi-lateral breathing all the way back. With about 300 Metres to go, I really sprinted back to the beach, knowing that this was all we were doing until the next swim at 12.00pm. Swimming through the traffic (there was 70+ swimmers in the water) I reached the beach in 18 minutes, and we were told to swim back to the second groyne and back again (about 400 Metres total). We did this, then came ashore after another 7 minute swim.

I felt pleased with myself, but I was amazed at the temperature reading on my watch. It said that the water was 12.4 degrees centigrade. It certainly felt colder than that, but then again, in a funny way it didn't. Getting out of the water, I wasn't cold, and all I could think of was what a difference a year makes. This time last year, it was a cold, grey day. Today was just beautiful. 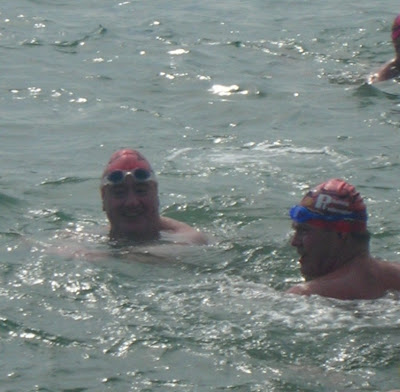 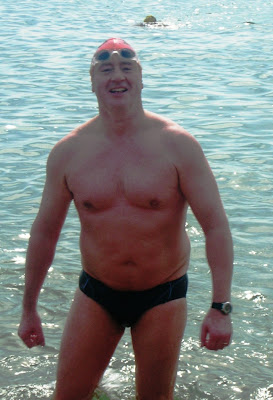 Above: Arriving back at swimmers beach after our first 1,400 Metre swim of the Dover season. 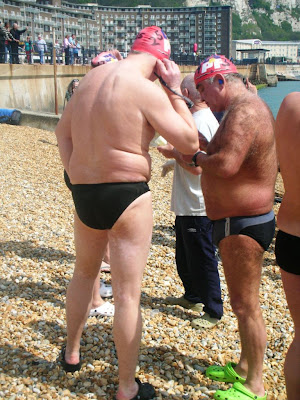 Above: Me with "King of the English Channel", Kevin Murphy prior to swim number two.

Remembering how difficult it was last year to get back in the harbour for the second swim, I was pleasantly surprised to just walk down and dive straight in this year. It was probably because I was one of the last ones to get in, and whilst having a conversation with Cliff Golding about sponsorship, I got a bollocking from The General! Yes, that's got to be the first one of the season surely!? 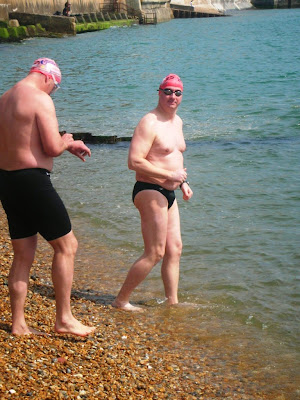 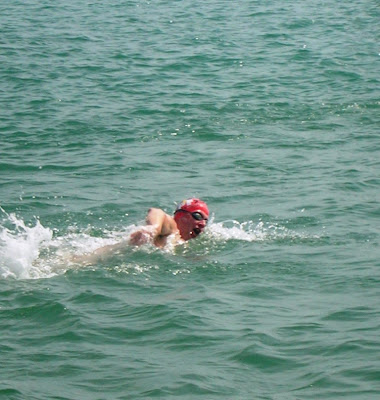 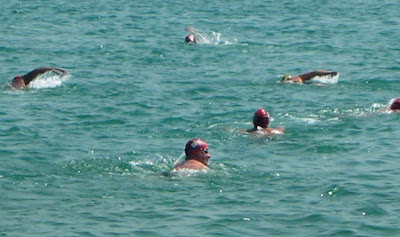 Swimming across to the Eastern Pier was great. The water was calm, and I didn't feel too cold. I even composed a little song (not one of my classics, like "Alison" or "Dreaming of you" of course) but it went something like "Ice cream Head please go away, go away, go away. Ice cream head please go away, away from Dover harbour!" to the tune of "Here we go round the mulberry bush"! You had to be there really, but that's the sort of thing you do in your mind when you're swimming in the channel I think! (Does anyone else do that? I don't know?!). 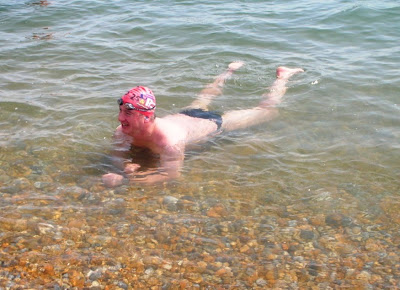 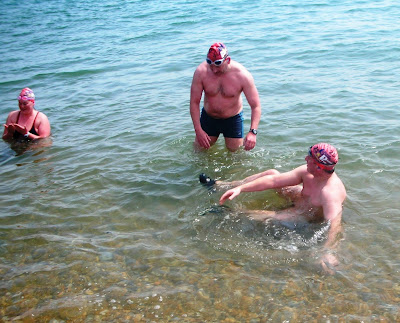 Coming ashore, I didn't want to get out! I felt quite happy in there and wanted to do a bit more. Of course trying to get out is notoriously difficult and it's a bit of a wrestling match with your Crocs, the stones and the waves, even though today they were barely non existent. 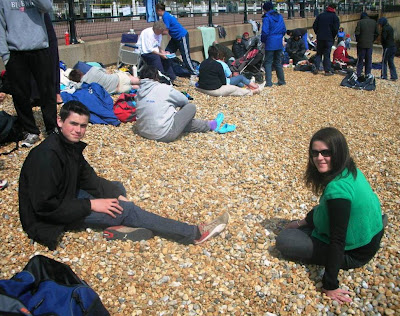 Above: Little Hoffy and Bex, enjoying the sun on a beautiful day in Dover. 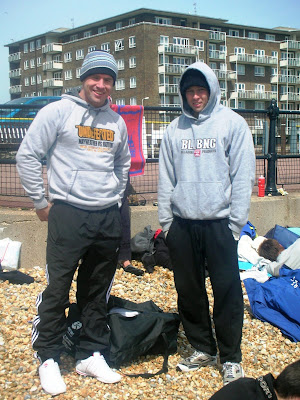 Above: Rob Telford and Ultimate Triathlete Chris Pountney who enjoyed the swim.

After the swim, we went to our favourite restaurant in Dover, Cullins Yard, who are the Title Sponsors of my two way channel swim, and had a nice meal, before setting off to Varne Ridge to make sure our caravan was booked correctly for the week of my swim. 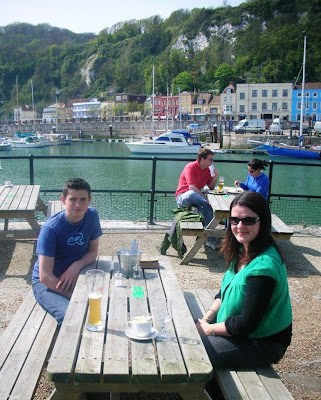 Above: Little Hoffy and Bex enjoy a nice meal at Cullins Yard, The place to eat in Dover (in our opinion).

So it had been a good day covering about 3KM at 12.4 degrees centigrade. We are now looking forward to coming back next weekend.
Posted on Saturday, May 03, 2008

Hoffy. Good luck to you, I hope the jersey swim comes off.

I was talkiing to my parents about your swims, and for some reason they said my little brother was going over to new York to swim to a prison and back. As a form of enjoyment. I can remember a few years back a visit to his new home of Poole where he has as beach hut, and his idea of a swim was to swim out to some marker boy (sp) and back during a tide change, 20 miles did not seem to phase him ( well at least within his past) just to stay fit ?
What is it with you water babies?

BB - LOL! I think we are all mad, but don't tell anyone! I haven't heard of that swim in New York. I will have to ask some people on the Google Channel Group about it.