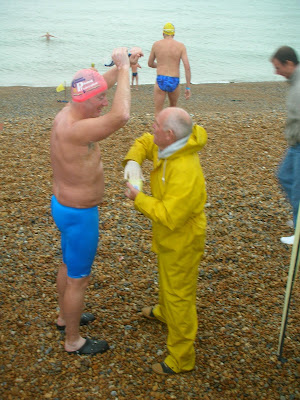 Above: The ever present Barry Wakeham puts on the Vaseline before another 6 hour swim in Dover Harbour.

After the disappointment of last week, it was important to get back into heavy training for my two-way channel swim attempt in September. Having tapered down for the Jersey swim, then not swum and only did some light training while I was there, I felt as though I was losing some fitness. So Saturday night at 8pm, only 24 hours after returning from Jersey, Beccy and I set off for Dover.

Arriving at 10.00pm, we headed for a pint of Guinness at the White Horse. As soon as we walked in I heard American accents and found out that they were non other than Liz Fry and her crew. Liz, had literally hours earlier, been pulled out at "The Varne" in the channel after swimming for 24 hours on a two-way attempt. This was a fantastic effort, and we chatted for about an hour about her valiant attempt. At 11pm it was off to bed ready for the next day's swim.

Arriving at Swimmers beach it really was a glum, grey, misty day with light spots of rain. "Looks like I'll be sitting in the car all day!" said Beccy. Barry greased me up and in I got. 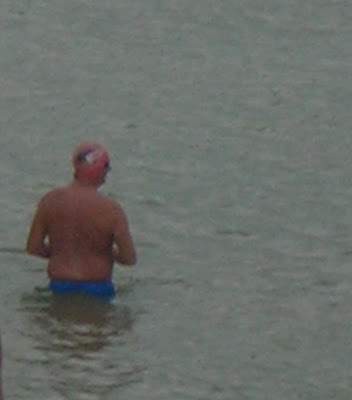 The water was in fact dead calm, and I proceeded to swim my usual 2 hour routine before the first feed. However, after about an hour, it cut up rough again at the Eastern Dock and it turned into a battle with the waves.

At the 3 hour feed, The General came down to speak to me, but I simply cannot hear her when I have my ear plugs in and hat over my ears. This is what I thought she said:-

"Don't go up to the Eastern Dock because I can't see you. It too rough over there. Go over the other side and go up and down the wall".

This is what she actually said:-

"Don't go past the slopey groyne, I can't see you because it's too rough over there. Don't go up and down the wall".

It was a good "blow the cobwebs away" swim, and it will only now increase with the 2 way channel approaching fast.

I would just like to say very well done to Leanne Harling, who I was supposed to be support swimmer for. Unfortunately, due to the weather conditions, her swim was brought forward a week, and it happened when we were on the airplane back from Jersey. She swum brilliantly for 12 hours before being pulled out due to the terrible weather conditions. Well done Leanne, you will do it next time I know you will.