Jersey to France Solo to become 'Around Jersey Solo'? - CANCELLED due to adverse weather conditions 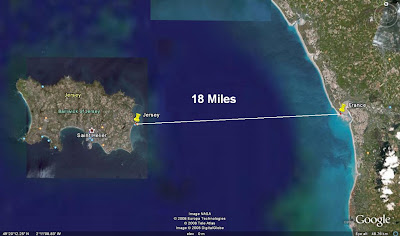 Above: The 18 mile swim from Jersey to France which is my next challenge... 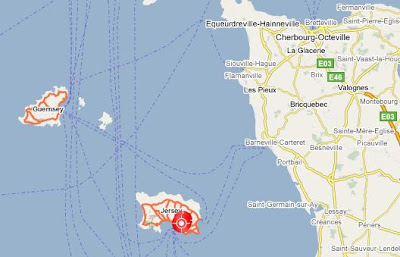 The second of my three big swims for 2008, Jersey to France, is now upon us, the first being my swim in Serbia and the third being my two-way English Channel Swim attempt in September. I am really looking forward to this one, and to meeting the members of the Jersey Long Distance Swimming Club of which I am now a member. Further information on this swim can be found on my web site at:-

On there you will find all the swimmers who have completed the swim, as well as other useful information about the swim. I will update this blog from Jersey when we get there, but all being well with the weather etc., I hope to swim on Monday August 11, 2008 - my wife Beccy's birthday!

I've just had a telephone conversation with Charlie Gravett in Jersey who has said that the weather for the whole tide next week is not looking good at all. He has told us that if we haven't already bought our tickets, then it's probably best not to come! He said that they would not go out if the sea was above a force 4. Unfortunately, all the weather forecasters are saying that it will be force 5 - 6!

This is open water swimming for you unfortunately. I will update the site as soon as I have any further information.

Well, I've been swimming in the sea in Jersey this morning for about 25 minutes. It was about the same temperature as Dover last weekend, 18 Degrees C. The really annoying thing is that this is probably the nearest I will get to a swim this week. Beccy and I had a drink with my pilot, Charlie last night, followed by a text this morning. There is very little likelihood of swimming before next Sunday due to the adverse weather conditions! If we were able to swim then, it wouldn't be to France, it would be around Jersey due to it being a spring tide next week. We are just sitting here in Jersey playing the waiting game. Will update when I have further news. 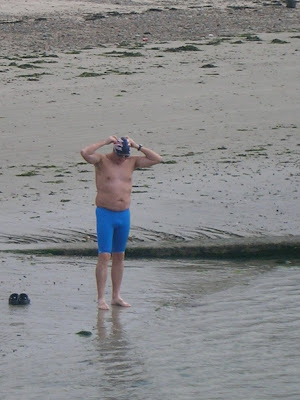 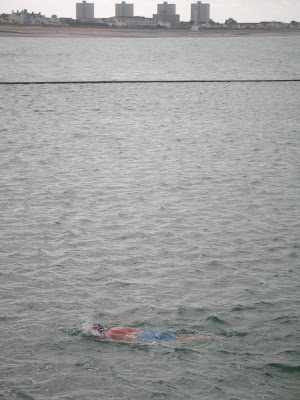 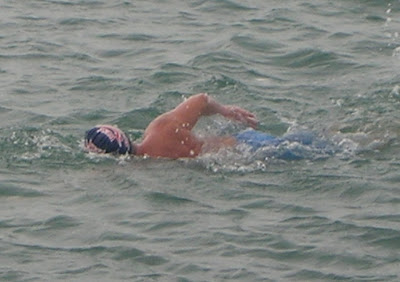 Above: Training in the Havre Des Pas sea lido, Jersey on Saturday August 09, 2008.

Well today is Beccy's birthday, and I haven't swum. Neither am I going to other than to train. Yesterday, I trained with the Jersey Long Distance Swimming Club in the beautiful St. Catherine's bay. The sun was out, I could see the starting point of a Jersey to France swim, and I could see the French coast, but other than a 1/2 hour 1 mile swim across the bay and back, there is no chance of a Jersey to France swim on this tide due to it being force 4-5 out at sea. It will be force 7 tomorrow! 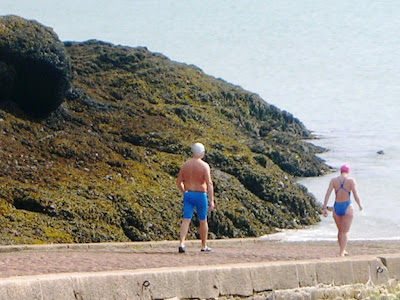 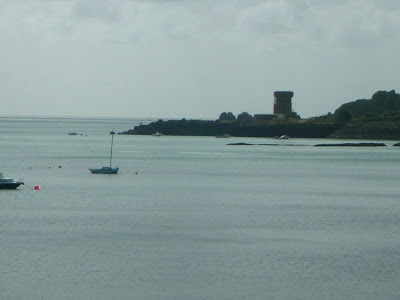 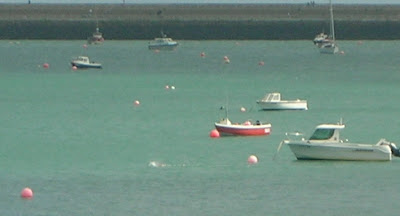 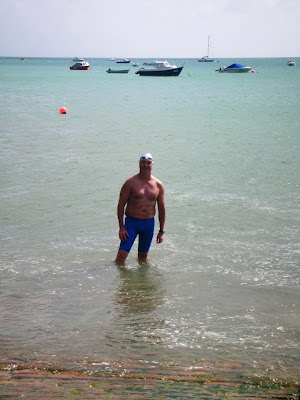 Above: Training in St Catherine's bay with the Jersey Long Distance Swimming Club on Sunday August 10, 2008 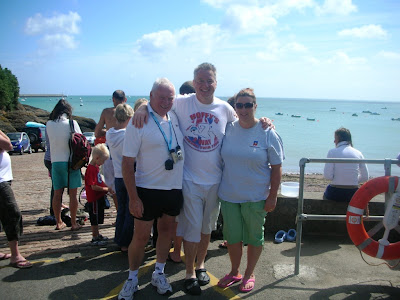 Above: left to right, my pilot, Charlie Gravett, me and 2008 Jersey to France swimmer, Wendy Prunty in St Catherin'e bay after my Sunday morning training swim.

My pilot, Charlie has told me that there is a very real possibility of an 'Around Jersey' swim, next Monday morning at 5am. This is a very challenging 44 mile 'Spring Tide' assisted swim. The logistics of being able to stay in Jersey for an extra 4 days, as well as hotels, flight and work commitments is being analysed as I write. I will update when the situation becomes clearer.

Well, since the last update on Monday, we have been playing the very nerve wracking waiting game, and I now have no finger nails left! Right up until yesterday, there was a possibility of swimming around Jersey next Monday. So Charlie took us around the island to see the swim. The winds were gusting up to Gale Force 8, and in some locations it was all you could do to stand up! 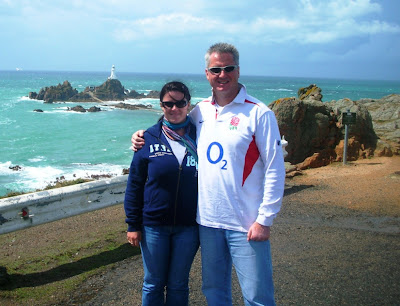 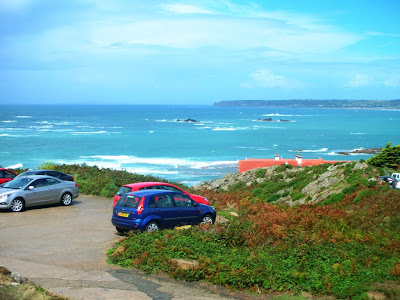 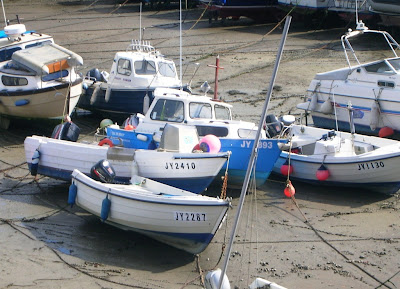 Above: The windy conditions can be clearly seen in the photos above. It would not be possible to swim in those conditions on grounds of safety. The blue boat above (JY893) is the pilot boat which would have taken us.

Yesterday, Charlie said there was a slight opportunity that we may be able to swim on Friday morning at 04.30 hrs. He would confirm it by text at 10.00 hrs. this morning, one way or the other. At 09.50 hrs. we got the text and as it is still gusting force 4-5, we will not be swimming.

We've enjoyed our time on the island, met some great people, and Charlie has spent alot of his time with us showing us around. Thanks for this Charlie, and I sincerely hope to be back again in the near future to give it another try. Meanwhile, it's back to Dover for some serious training again at the weekend!

Email ThisBlogThis!Share to TwitterShare to FacebookShare to Pinterest
Labels: Jersey to France 2008

Back to dover this week for more training then!

BB - Hopefully not! I'm not going all that way for no swim at all. Worst case scenario, I will train in Jersey!

You could train in our back garden, it's pouring here and everything is flooding. Love English Summers!

This waiting around carry on gets to you does'nt it ? lol still no go here been checking the weather forecast and looks like Friday might be good (fingers crossed !)

I bet we are swimming at the same time lol

Maggie - Very frustrating isn't it!? If you go on Friday, best of luck. You will do it, I know you will!

You deserve this, both jersey and the 2 way. You have trained very hard and all you need is good weather.
I am home 12 days was enough waiting, and today and tomorrow i believe they are out swimming. I was way down the list and have rebooked for 21/27 sept.

Hoffy, it's Thatch and Jen from Nelson's Eye, Jersey. You mentalist!! We got up at 4.10 on the Friday morning and camped at Ouen Bay all day to cheer you round the island. By 3 in the afternoon Jen was so p1**ed that she couldn't have seen you even if you had swum.

Good luck for September, we'll keep an eye on your blog.

also try mine at www.helpwithdebt.org.

Thatch - LOL! Glad you didn't waste time getting up that early. Tell Jen she chose the better way to spend her evening/morning!

Thanks for the good luck, I'm going to need it! Will check out the blog.