Back to training again in the pool and at Felixstowe...

Living where we do in Suffolk, Felixstowe is the most accessible piece of coast for us to drive to for a quick swim, and it was where I did my first real "cold water" swim in December 2006. It is dual carriageway all the way and is only 37 miles away. With no prospect of starting my two-way channel swim in the next week or so, it is only logical that I must start training again or begin to lose fitness. Friday night I did a gentle 1,000 Metres in the pool at Clarice House and felt absolutely dreadful. My arms were heavy, and despite having a very deep sports massage at GeeCol Wellness Studio on Monday, and Electro-Magnetic treatment at Med and Mind on Friday morning, my lats and arms still hurt. The gentle swim helped and at the end of the 1Km I felt alot more pain free than when I got in. But this was in warm water, and I needed to get into the cold water. Talking to Freda Streeter on the phone on Saturday morning, she said I needed to get in the sea for 3 hours. I spoke to Beccy, and we decided to swim in the sea at Felixstowe again on Sunday afternoon. 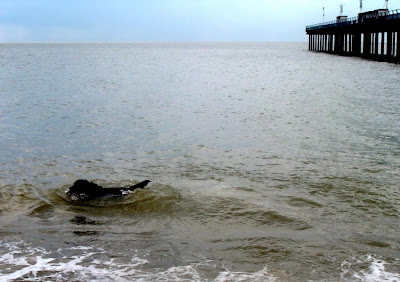 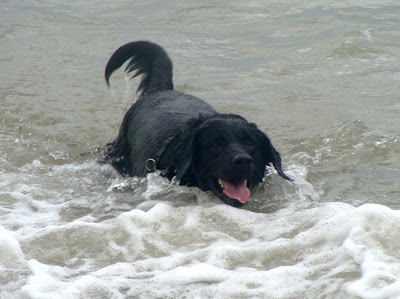 Above: 'Casper Dog' testing out the cold water (16.3 degrees Centigrade) while I was still getting ready to get in. 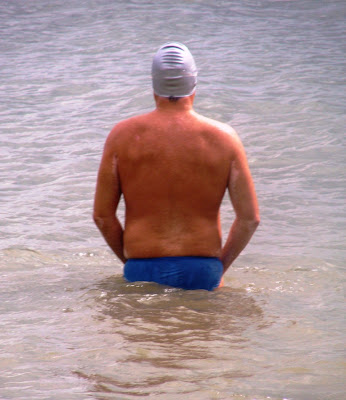 When we got there I was amazed at how flat the sea was. My immediate thoughts were "why is no one swimming the channel?". There was no wind, and it was very mild out even though the sky was grey and it felt quite miserable. I undressed, got in and started to swim. It felt very cold at first, and my lats still hurt. However, after about 15 minutes I started to feel OK. It's funny, but this always happens, even when you are starting a 6 hour swim the day after a 7 hour swim.

After about 20 minutes, the sea changed and it began to "swell". This was good as this is like it will be in the channel so it is best to get used to this type of sea. Swimming from the pier towards the beach at "The Fludyers Arms" public house, I arrived there in half an hour. Beccy had been walking Casper along the promenade so that she could keep an eye on me, and I could see her too which is always comforting when you are the only one mad enough to be in the sea! I turned and headed back. 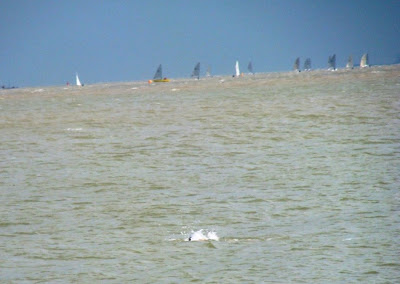 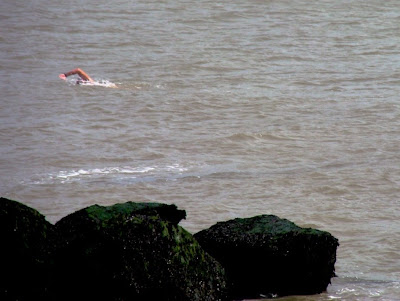 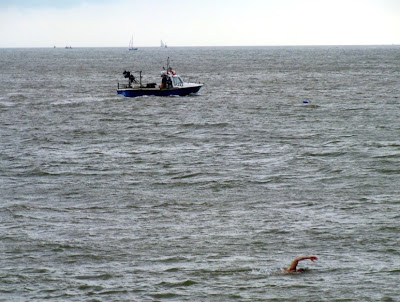 It was far bumpier on the way back, and Beccy kept disappearing. This distracted me somewhat. Then I saw this mad bloke over on the promenade with an umbrella up. "What an idiot!" I thought to myself. "It's not even raining! LOL!". With about 300 Metres to go, I noticed that Beccy was running a bit, so I stopped and looked up. It was then that I realised that it was absolutely pouring with rain. I had intended to do 6 lengths of 1 mile each, but when I got to the pier, Beccy was standing there with my towel and coat. She was absolutely soaked through to the skin!

"How long has it been raining" I asked her "All the way back from the Fludyers Arms" she said. I felt quite bad for her. This was why she kept stopping. She was trying to get some shelter. It's really weird but when you are swimming and "in the zone" you simply do not notice it is raining. I got out and we drove back to Bury, Beccy with soaking wet clothes on.

Well I completed an hour in the sea covering 3,200 Metres at 16.3 degrees. Not ideal, but I feel better now that I have done it. I just need to see what this week holds and when and if my two way attempt will happen. The waiting game continues!

Email ThisBlogThis!Share to TwitterShare to FacebookShare to Pinterest
Labels: Cold Water Training, Lead up to the channel swim

thanks for the message hoffmeister general

lot of swimmers out today, hopefully will get the chance soon, guess you need a bigger window for a 2-way though?

cant believe you got out after an hour cos it was raining! what would freda say?!

Chris - Thanks for the message. When your wife is standing there holding your coat open, towel under her arm, and soaked through to the skin, I didn't really think it was worth getting into a debate over!! LOL!

Was going to ring you about support swimmig for me, but not until I know when I am going!