Above: The view of the White Cliffs of Dover viewed from France. It doesn't look that far really does it!?

I have just spoken to my pilot Neil Streeter. He has just got up after completing a mammoth 21 hour swim with a Triathlete who was number 1 on my tide. He told me that there is a possibility of the number 2's going tomorrow or Thursday. They are a channel relay team. If they go tomorrow, I will be swimming on Thursday and Friday. If they go on Thursday, I will be going on Friday and Saturday. I will know more tomorrow. It's getting close now. I'm going to do about an hour in the pool tonight, and prepare all of the equipment ready. Will update tomorrow. 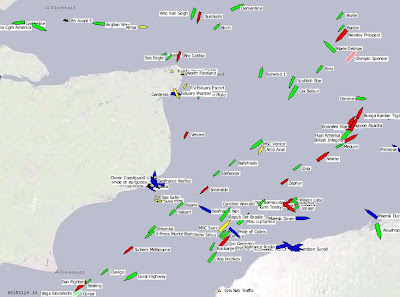 I've just looked on the shipping chart in the English Channel, and my support boat SUVA is a couple of miles off Dover next to Sea Satin. This is the number 2 swimmers (the relay). This means that I will probably go tomorrow, Thursday. I will speak to Neil Streeter later in the day.

Just spoke to Neil in The Channel and it looks as though I will go at about 20:00Hrs. tomorrow, Thursday September 11, 2008. This will mean swimming through the night first, which will get the cold dark bit out of the way first, then swim into and through the day. We will be heading for Dover in the morning. Will confirm nearer the time. Very exciting!!!

We're going tonight at about 8pm! Fellow swimmers from Suffolk, Mark Ransom (Channel Swimmer 2008) and Chris Enyon from Sudbury & District Swimming Club (Channel Swimming Aspirant 2008) will help Beccy as my support crew. Will be leaving for Dover shortly and thank you for all the well wishers who have commented and text me. It's now time to deliver, and I will do my best. Please sponsor me here:-

Its like waiting for Christmas-except it keeps being postponed! Hope you get to make the attempt before your time window expires. Good luck.

Hoff
Go for it !! NO DOUBTS YOU WILL MAKE IT

Lots of luck! (Friday-Saturday looks better to me, but who am I to tell - might be too easy then ....)

Enda, Vasanti. Thanks for this, I just really want to go now as I'm sure you both do. Very best wishes to both of you, you both deserve to get across with the amount of training you have done, and the positive mental attitudes you have both shown. To quote a well know saying:-

Go for it Hoffy, every body back in bury is rooting for you

Thanks B.B. I will do my very best!

Hope you have your Hoffy the Humper trunks on lol

Seriously though Good Luck you can do this :)Don't forget the tumble turn at France

Maggie - I've ironed them specially, and praticed me tumbles last night in the pool! Cheers, Hoffy.

Wow - and he's off! How exciting. I will be sending you good vibes all day and hoping that all goes well. I wish you calm warm waters and lots of energy!

Be Safe, swim well, thoughts and prayers with you.
Enda k

Hoffy set off at 8.25pm and is now about a mile away from landing in france, before beginning his swim back!

Thinking of you Hoffy, dodge those ferries!

Stick with it Hoffy, Its the home stretch.

Bye the way was there a warm spot about 7 miles in from the french coast, above the euro tunnel!

unfortunately, he was not able to swim back to england this time. i'm sure he will tell his story in time.

You must be so disappointed, but never forget that you have still swum the Channel twice-thats twice more than most of us. Well done Hoffy-and all your support team.

Paul well done on your compassionate and brave effort. Still the most amazing and unselfish feat whichever way you look at it.

Well done, that sounds like a fantastic time of 13 hours and 3 minutes. Most of us sitting here wouldn't have even dipped our toes into the channel today.

For when you are home, warm and dry I have tagged you!

Best wishes to you and Bex

Well done my friend! You are a channel swimmer x 2. What most of us would give for one.

A Two way wasnt to be tonight, but what the hell!!! enjoy a few hard earned guinness.

Well done that man! It is still an achievement. And I sure that you will do it one day - you have the power and the support and the determination. Enjoy a well-earned rest for now.

Thanks everyone for the comments. Much appreciated. I have updated the blog with the story of an awful night in the channel!