Training with the Channel General... 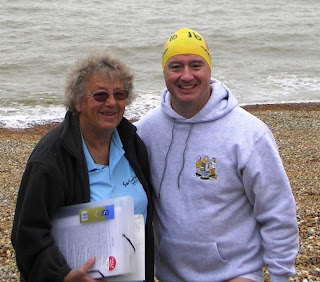 Above: Freda Streeter, the Channel General, and Hoffy, prior to the first channel training session of the season in Dover Harbour on Saturday May 05, 2007.
On Saturday May 05, 2007, my wife, son and I got up at 5.15.am (having attended Cllr. Mike Ames’s retirement and Birthday party until 12..00am the night before!) to set out on the first of many treks to Dover over then next few weeks. Why? To train with the Channel General – Freda Streeter.
Every year from May until the end of September, Freda trains all budding channel swimmers every weekend, free of charge, giving up her weekends to do something she loves. It has paid of handsomely. Her daughter, Alison, has crossed the channel more times than anyone else in history – a staggering 43 times! Therefore when given the chance to train with Freda, all budding channel swimmers should (and do) jump at the chance. 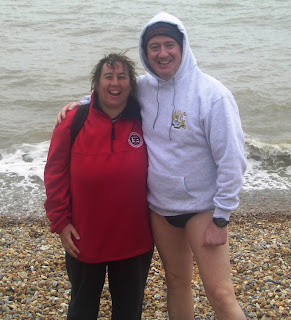 Above: Hoffy with Alison Streeter who has swum the English Channel a world record 43 times!

So how did it all work? We assembled on the beach in Dover Harbour at about 09.45 and started chatting. Suddenly, Freda and Alison appeared and I have to say I was quite star struck at first. I had heard so much about both of them, but to meet them in the flesh was fantastic. Freda gave us our instructions which was basically put this hat on (mine was No. 16 yellow for first time solo swimmer) get in the water over there, swim to the far pier and back again. No more. No less. No arguments. I did as I was told.

All of a sudden, everyone started stripping off on the beach, costumes on, hats on, in the water and we're off! This was at 10.00am. About 40 or so swimmers entered the water. It was about 11 degrees centigrade which was pleasantly warm compared with what I had been swimming in recently (8 degrees centigrade at Felixstowe, and 7 degrees at Tooting Bec Lido). 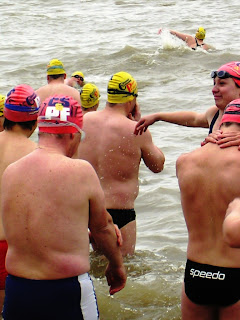 Above: Getting in at the first Dover Harbour Training Session of the year - Saturday, May 05, 2007. 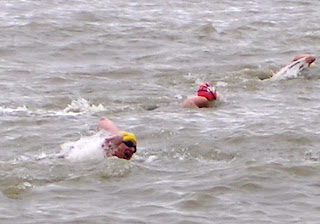 When we all got back, it was all quickly dressed, hats, clothes etc., then dissapear for a cup of something hot, then back again at 12.00pm for more of the same. At the end of it all, we went off together for something to eat and drink, and to chat as a group about our experiences.

It was a great morning, and I was sad not to be able to stay for the rest of the weekend (we had to go back to Bury for the America 400 event on the Sunday). It was a thoroughly enjoyable experience, and I can't wait to get back next Saturday morning.

Thanks very much Freda, and see you on parade at 10.00am on Saturday!

Sorry for not being in touch, TPD towers is just getting off the ground, should be in new building sometime later this year. If I be so bold and offer a little constructive advice, Either wear a longer sweat shirt or jogging bottems in future pictures, its put me right off my lunch. Is it cheating if you start the channel swim when the tide is out? trev

Super Trev! Wondered where you'd been. Well beleive it or not, I was just getting into the water so had removed said jogging bottoms (they tend to slow you down if you swim with them on). Apologies about the lunch, I'll refund the £2.31 you paid for the swim cap to compensate.LOL! I don't know about the tide. It's a good thought though. It could reduce the time to swim it from 14 Hours to 13 Hours, 59 Minutes and 58 seconds. I'll find out for you on Saturday!