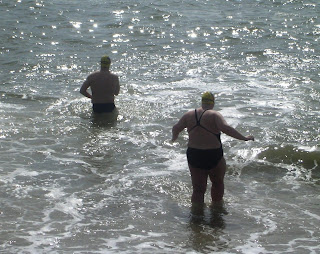 Above: Getting into the harbour for the second time is never easy. (I'm the one without the straps).

Getting in the water for the second time at 12.00pm, having only just thawed out from the 10.00am swim is always difficult. It was made even more difficult now that the wind speed was increasing causing the sea to be very rough over on the left hand side of the harbour. "Don't go past the third groyne" was the instructions from The General, and "...swim for an hour". This was going to be tough. 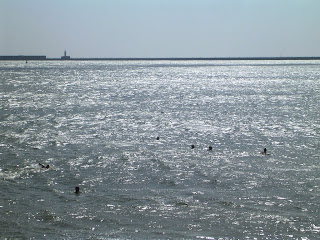 Above: Channel swimmers scattered in the eastern side of the harbour which was experiencing rough water.

I looked up and forward, as you seem to constantly do in the harbour in case you bump into another swimmer heading your way. I saw someone just in front of me and said "Have you been all the way across?". He replied "Yes, I touched the wall and am now heading back". I thought to myself, "Well if he can do it so can I" and continued towards the wall. Reaching the wall with 45 minutes on my watch, I turned round and started to head back.
It was like swimming head first into a wall of water. I swum, but wasn't moving forward. I started to think about all those 25 metre sprints my coach John Stemp had made me do recently. This is where they would pay off. I started to sprint and slowly started to move forwards. I saw our hotel to the right, the Premier Travel Inn. It moved slowly past my line of sight after about 5-6 minutes. I was still sprinting like mad, swallowing what seemed like litres of sea water, and heaving it out constantly. My arms were going faster and faster. I was thinking "You're not going to beat me you bastard". I sprinted for the best part of a 1000 Metres, and eventually came level with our spot on the beach, then turned right to head ashore. "Yes!" I thought. "That was fantastic. That was what I envisaged it was going to be like in the channel". It hadn't beaten me, and I was happy. Tired arms, but happy. 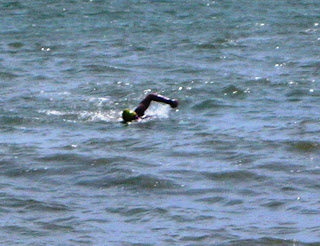 Above: heading to shore after battling against the waves on the second swim of the day.

As I came ashore, the Mayor said that she had lost me about an hour ago. I replied that it was not surprising as I had been a lot smaller than the waves had been. I had ploughed through them and returned after one and a quarter hours. This was undoubtebly the longest, hardest and most rewarding cold water swim I have so far completed.

I slept well that night (especially after watching the Eurovision Song Contest) and looked forward to one and a half hours on the Sunday morning 10.00am swim.