Diary update prior to swim...

There were many failures both yesterday and today. One girl has come all the way from Australia and swm for just 2 hours before the cold got to her. This really is a difficult task, but I am focussing on getting across and trying not to listen to why they have failed.

If I do not report back after this entry, then you will know that the swim has started at 06.00 Hrs. on Tuesday July 10, 2007. Thanks for all the support. Hoffy.

Ten boats went out today. Reports back say that there have been many failures. Two people we have spoken to said it was really cold in the middle of the channel. The temperature dropped by 1 degree centigrade in the middle. That doesn't sound alot, but when you have been swimming for 6-7 hours at 15 degrees, and it suddenly drops to 14, it is a major problem.

I spoke to my pilot Andy King at 19.15 Hrs. who was with the No. 1 swimmer. They have been going for 15 hours, and apparently the swimmer was getting tired, but still OK. There is a good chance of No. 2 going tomorrow, which means that I could go on Tuesday (am). However, if the No. 2 swim is for 15-20 hours, Andy needs to get some sleep, so it could be Wednesday (am). Will keep the blog updated as soon as I know.

Spoke to my Pilot, Andy King, he said that the weather should be OK over the weekend for the first swimmer to go on Saturday July 07. This means that swimmer No. 2 could go on Sunday, which means I could go on Monday. Very exciting!

The swimming order for the week will be as follows (apologies for any spelling mistakes):-

The high tide on Monday is at 05:29 Hrs (5.7 Metres). This means that we will leave at approximately 03.30 Hrs. This is obviously just provisional at present.

Recorded an interview with Sonia over the phone for local radio station SGRFM for release on the day of the swim.

Got a text from Karen Roberts at CLIC Sargent (the children's Cancer Charity I am swimming the channel for). She has put a poster in the window. I went down and had a photo taken of both of us beneath it. 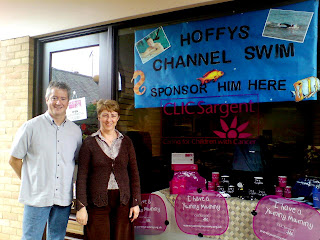 Amy from my Title Sponsor Dangerous Films telephoned me and asked what I was wearing on the day! True! Apparently, they have to know what colour hat, trunks goggles etc, I will be wearing so that it is consistant throughout the filming. When I explained that if my goggles broke I would have to change them and I did not have two pairs the same, she paniced! Eventually, she went to a sports shop in London and bought me 5 pairs of goggles all the same. As I write, they are on the back of a motorbike courier from London to be delivered here by about 5.30pm!

I don't know - the life of a channel swimmer is never dull is it?

BBC Radio Suffolk reporter Jonathan Wright popped into the office to check the current status. He will be broadcasting live from the boat on the day of the swim. Click on the link to access BBC Radio Suffolk's web page.

I really can't believe it! No more than about 4 hours after Amy from Dangerous Films in the West End of London telephoned me to ask what I was wearing, 7 sets of Speedo Goggles arrive at my front door directly from London by courier (about 90 miles away)! Thank you Amy and Dangerous Films! I will now have to try all of them on, test them in the pool and make sure they are all OK prior to the big swim. 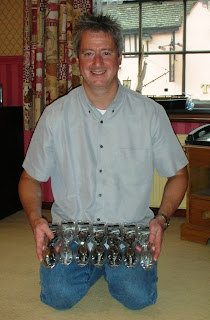 Above: Me with seven sets of matching Speedo goggles for the filming of my channel swim.

Just spent an hour on the West Suffolk Radio with my coh John Stemp who is the DJ at West SuffolkRadio. It was an intesting experience!

Well I'm now off to get my sea sickness pills for the boat. Will spend some of tomorrow drawing up a feeding plan which will consist of Maxim, bananas, chocolate mini rolls, various forms of pain killers (this is for Paul). Practising my throwing techniques (that's throwing the bottle not throwing due to the motion of the boat), and purchasing rubber gloves for the greasing up.

Well done for all your hard work, I know you can do it.

Rubber gloves, chocolate mini rolls and bananas - what kind of trip is this??!! ;-) Good luck Hoffy, I think you are incredibly brave and I think all the training you've been doing is amazing!

Best of luck Paul, we'll be thinking of you.

Good luck Hoffy ~ if you need any lemon curd let me know. I'm now encouraged to do a length of the pool at the Moreton Hall Health Club ;-D

Nigella -If Ruby had of taken me up on the offer she could have told you first hand what type of trip it was! LOL!

Ruby - Thanks, the view today is awsome. I could clearly see Cap Griz Nez in France. It was stunning. Waiting to go now hopefully Tuesday am. (Many swim failures today after 6-7 hours. It's very cold in the middle of the channel apparently)

21st Century mum - I'll look forward to a plate load on my return! And go for the length at Moreton Hall. That's how I started, gently building things up, and now attempting 30 miles!