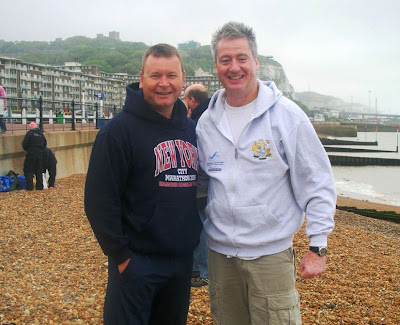 Above: With Enda Kennedy from Ireland who will be attempting his English Channel swim during the week of August 07 - 16, 2008.

After all the excitement of last weeks swim in Serbia, it was back down to earth again this week arriving on Swimmers Beach, Dover to hear those immortal words, "Hoffy! 7 Hours". I didn't hang around, I just undressed, Barrie Vaselined me up and in I went. First one in the water. For some strange reason, I was actually looking forward to it. I got into the icy water, which somehow never seems to get any easier getting into no matter how 'warm' it gets (it measured 16.1 Degrees Centigrade on my watch) and set off. When I looked back, everyone was gathered on swimmers beach having a talk from Cliff Golding. I wasn't getting out again, so just carried on. So much for being first in the water! 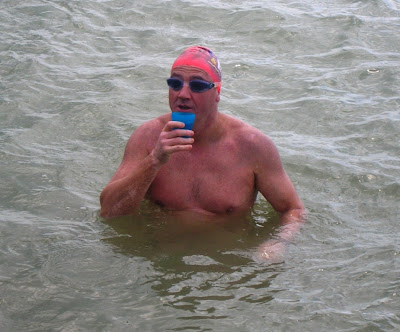 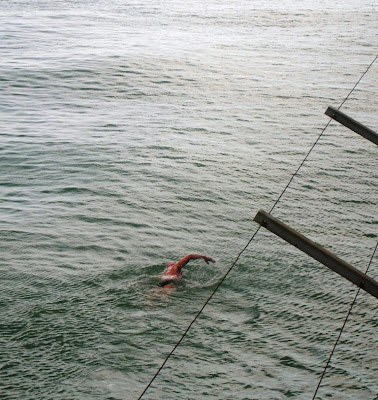 Above: Up and down 'The Wall' (Prince of Wales Pier) doing sprints between hours 6 and 7. Just the thing when your arms and shoulders are hurting!

The whole swim, was uneventful really, that was apart from it being very rough over by the Eastern Dock, smashing your arms to bits with every stroke. Oh, and of course Nick Adams giving us Jelly Babies on 3,4,5 and 6 hour feeds. Oh, and the Red Arrows flying over at about 6.5 hours. Oh, and Enda threatening to tell Freda because I had stopped to talk to Sam Jones. Oh and Fiona Southwell punched me in the right eye during one of the feeds while throwing her empty Maxim cup back to the beach and in doing so, she bruised the bone above my eye (it still hurts today!).

Apart from all that, nothing happened and it was quite quite uneventful, until... 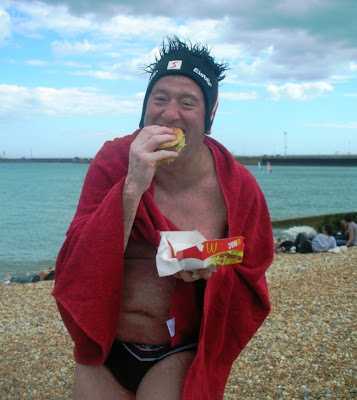 Getting out of the water feeling absolutely starving, there was my mate Nick Adams with, would you believe it? A BIG MAC! WOWWW! It was just what the Doctor ordered! I don't think it even touched the sides I was so hungry. Thanks Nick, and good luck in Jersey next week.

We had a quiet meal in Cullins Yard bumping into Enda, Joni, Billa and Freda, had a pint of Guiness, then went to bed for a good sleep!

Eventually hauled myself out of bed at 06.45am feeling like I'd just done 10 rounds with Joe Calzaghe! However, this has now become quite normal and I was looking forward to 'only' doing 6 hours today. "Hoffy, 6 Hours!" came those familiar words. But then we stopped and all sung 'Happy Birthday' to Barrie who on this particular day in history, became eligible to get collect his bus pass. Happy birthday Barrie! 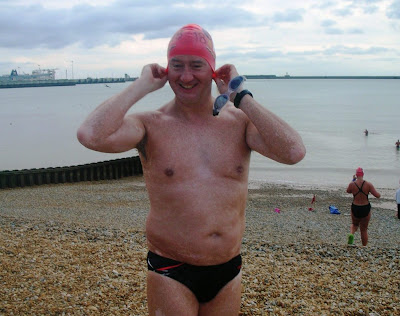 Anyway, we did the usual, got Vaselined by the Birthday Boy, got in but it was bloody freezing! My watch measured 16.4 Degrees, i.e. warmer than yesterday, but it felt freezing. I came in at 2 hours and everyone was saying it was cold. Apparently it was due to the Northerly wind blowing on our backs and so making us feel cold. Undeterred we all carried on. I don't think anyone got out early. Everyone just put one arm in front of the other and swam for their allotted time. 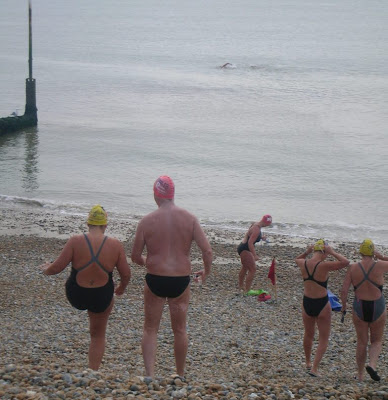 The Red Arrows went over again today, however this time much earlier than yesterday. It was at about 3 hours. I must have a word with Freda to see if she can order them a little later for next week. i.e. about 1/2 hour before we finish. It just adds that little "Je ne sais quois" to the end of the swim. 3 hours was just too early. Freda - about 5 1/2 hours for the Red Arrows next week please! Thanks. Hoffy.

Anyway, where was I? Oh yes, we had Jelly Babies at 3,4 and 5 hours from Nick Adams, then....wait for it......not just a Big Mac, but A BIG MAC WITH REGULAR FRIES! It was awesome. Just the thing to put back on that fat that I just lost swimming back and forth across the harbour! Thanks Nick. Much appreciated.

That's about it really. Another "Split Channel Swim" completed. Off we went home contented. Oh, apart from the road works near the M25 which sent us round past Heathrow adding 100 miles onto our journey home. Oh and.......

Hoffy
I saw nick coming with the big mac, but i was trying to be nice, as i refused his jelly babies. I wanted to beat him up for the big mac
I flippin thought they were iboprofuen tablets. his (j/babies)

will be in dover sunday the 3rd. Are you there, or in jesrysey. Regards to beccy, and hoff junior

Thanks for checking out our blog. I swim either tommorrow or Sunday. EEK! Its almost here. Anyway, just wanted to say that when I do a big swim I always crave a hamburger, so that was very nice of your friend. Good luck with everything!

Enda - LOL! The jellies weren't pain killers but were certainly taste bud stimulators! You'll have to get some next week to see how good they taste. Yes, we'll be there on the 3rd, it's the week before Jersey,and it's Dover Regatta weekend. I will be competing in the 2KM race.

Mallory - Very best of luck with the swim. I am sure you will do very well. Have someone waiting at the other side with a hamburger for you! LOL!