Dover 2008 week 9 - A very windy and rough weekend in the harbour, but another 'Split' channel swim 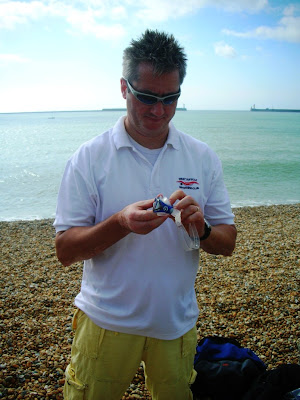 Arriving at 'Swimmers beach at 08.30am on Saturday morning, I was delighted when The General handed me my goggles which I had lost the previous week. Apparently, they had washed up on the beach at low tide last Sunday morning. Amazing! Thanks Freda. I changed the lenses for the tinted ones, which you are able to do with these goggles, then set off for the first day of my second 'Split Channel Swim'. i.e. 7 Hours Saturday and 6 Hours Sunday, total time in the water - 13 hours separated by a nights sleep. This may sound easy, but it is very difficult to pump out 6 hours the day after you have completed 7 hours. You are tired, your back and shoulders hurt, and the last thing you want to do is swim. However, this is Freda's tried and tested means of preparing channel swimmers for the most difficult task in world swimming. i.e. To swim The English Channel. It worked for me last year, and I hope it will again this year. 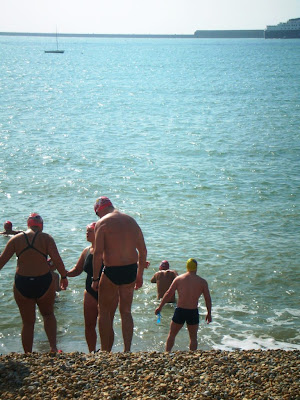 This week, Beccy sat on the beach studying for her 'Anatomy and Physiology' exam on Monday July 07, 2008. She is studying this first, followed by body massage afterwards so that she can treat my worn out old body after all these arduous swims! Below, is what she was staring at for most of the weekend, as well as being official photograper as usual. 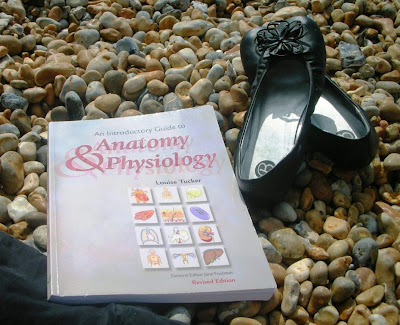 I set off on my swim, but when I arrived at The Eastern Dock, I was amazed at how rough it was. It was incredibly rough, but when you looked at it from the beach, it looked very calm. I think that most people who swam over there found the conditions the same, almost too difficult to swim in. So I spent a fair bit of time "going up and down the wall" as we say in Dover. i.e. Swimming up and down the 325 Metre stretch that is the Prince of Wales Pier. 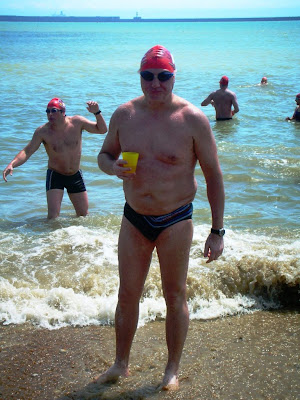 Above: Coming in for one of my 5 Maxim feeds of the day, while another swimmer has the time and energy to do a break dance in the background! Thanks to the beach crew as ever for all your hard work. 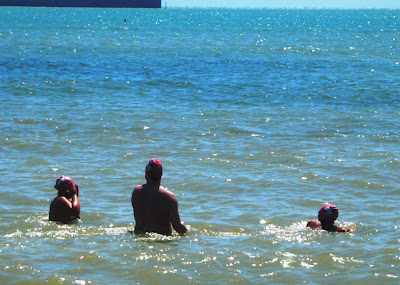 Above: Swimming with Sam and Michelle towards the Prince of Wales Pier. The place to be this weekend! 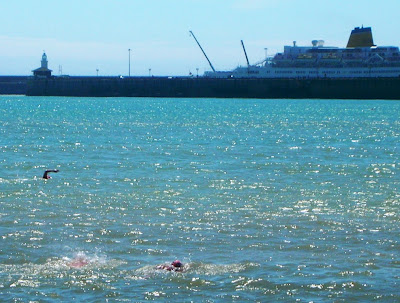 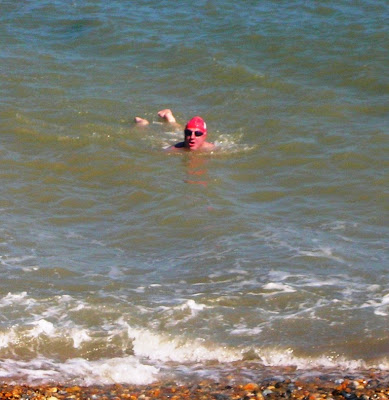 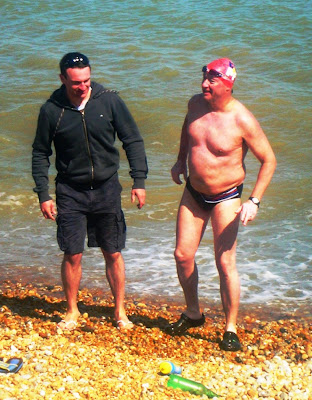 Above: Exiting the water after 7 hours and 19.21KM @ 16.2 degrees Centigrade. 2007 Channel Swimmer Sandy Wilson was helping with the feeding. Good to see you Sandy.

Arriving at the beach on Sunday morning, we could see that nothing had changed and it was still very rough over by the Eastern Dock. I managed 3 lengths on my first swim, but rather than my usual 4 lengths before the first feed, I decided it was too rough, and murky to go over there again. I spent the rest of the day over by the wall.

At about 3 hours, I bumped into Nuala Muir-Cochrane who I met at The Champion of Champions event this year. I swum up and down the wall with her for the rest of the afternoon, but she really is an incredibly fast swimmer, in the league of Nick Adams. We swum quite a few 325 Metre sprints down the wall towards the beach, and a gentle swim out towards the harbour. I really enjoyed this, and saved my fastest until the last one of the day. I was flat out at 5.75 hours doing a 325 Metre sprint. It felt really good (even though Nuala finished in front of me again uttering the words "What kept you?"). I thought I was fast, but she is amazingly quick! 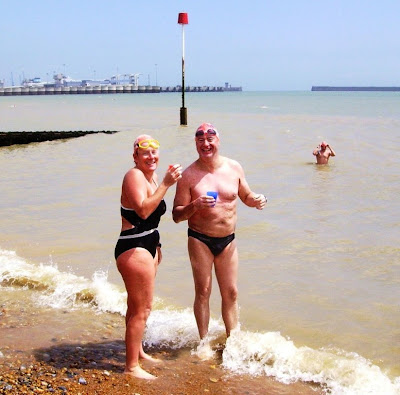 Above: In for a feed with Nuala Muir-Cochrane at 5 hours. Mike Cross can be seen in the background coming in for a feed (Photo by Rob Telford using Nicola Millichip's camera. Thanks Nic).

I completed 15,960 Metres @ 15.8 Degrees Centigrade in 6 Hrs. 2 Minutes. All in all it was a good weekend, although I had to drive the 140 miles home as Beccy had forgotten her contact lenses! That was a tiring experience I can tell you.

Thanks for blog comment, Scottish waters never heat up although the Loch is warmer than it has been. I could'nt believe how my fingers had all spread out after an hour and thats when you know its really cold. I've only ever experienced that before in big swims! but it's good training i suppose and toughens me up again after all these years doing bugger all lol

Good luck in Serbia I hope you do really well and have a great time " Go Hoffy the Humper!" hahaha sorry Becky its his fault ! lol

See you soon in Dover

The open fingers thing is very interesting. About 3 months after I started training for my channel swim, I swum 1 Mile @ Felixstowe on December 26th, 2006. I was very worried as I had never done any really cold water swimming before, and this was to be 1 mile and 35 minutes at about 8 degrees C with hundreds of people and BBC Radio Suffolk watching and broadcasting. I was really worried about Hypothermia, and someone had told me that as soon as your fingers start to come apart, then Hypothermia is setting in. It was all I thought about during the 35 minute swim (see my original blog site at http://www.blogstoday.co.uk/bloghome.aspx?username=HoffysChannelSwim). Thankfully it didn't happen. I have not heard of it since so it was interesting to read yours. Great and brave swimming though! Well done.