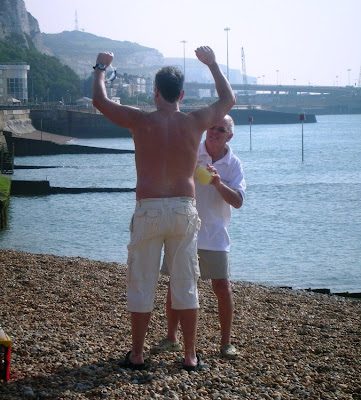 Above: Arriving at "Swimmers Beach", Dover to be greased up by the ever present Barrie 'The Shingle Stomper' prior to another 7 hour swim.
This weekend was to be my last 'split channel swim' prior to my attempt to swim from Jersey to France in August. It was therefore important to get a good two days swimming in prior to Jersey, which will be my second of three big swims this year, the first being the Serbia swim and the third, the 2 way English Channel. Having said that, I am at present contemplating a fourth one in October, but it is not decided yet. Watch this space!

During last week's split channel swim, I swam for a little while with Dr. Leanne Harling from London. She is a member of the Serpentine Swimming Club, who trains with two-way Channel Swimmer Nick Adams. I thought then that we trained at a similar pace. This week, we both got into the harbour on a beautiful sunny day, and decided to swim together. We did this for 5 hours before I went off to do some sprint training at about 5 hours. I find this very useful for arm strength and stamina towards the end of long sessions. It is also something that you may need to do in the channel at any time into the swim if your pilot tells you to speed up for 30 minutes due to the tide or to miss a tanker etc. You need to be able to pull this out ofthe bag when your arms simply do not feel like it.

After about 2 hours or so I said to Leanne "I was wondering if you would like to be my support swimmer?". She replied "I was just thinking exactly the same!". Her swim is the tide of August 23rd, and mine is the tide of September 6th. So once we have checked diaries etc. this week, hopefully we will be supporting each other on our respective swims. She is a great swimmer with a really long, but fast stroke who trains with Nick Adams. This explains why she is so fast! 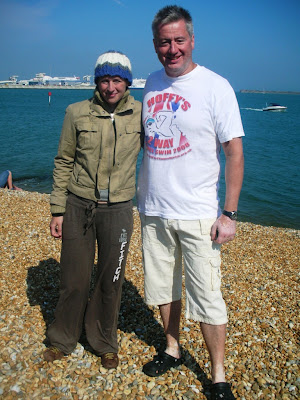 Above: Dr. Leanne Harling and me after our 7 hour Saturday swim.

After the 7 hour swim, we went to Cullins Yard for something to eat, then went off to "The Coastguard" in St Margaret's Bay. This is a lovely pub overlooking the channel. From there I like to sit and stare across the channel at France and watch the shipping go by, and get a mental feel of what lies ahead in September. They also have a very large selection of continental beers! Antonio Abertondo, the first person to complete a two way channel swim in 1961, finished his swim here in 1961. I sat there and mentally pictured myself, walking up the beach, into the bar and ordering a beer after 30 hours swimming in the channel! That will be my goal and the mental picture I will take with me across the channel and back in September.

Waking up on Sunday morning, I felt as though I had been attacked by 'The Morning Gorilla'. I'm sure he picked me up by the hair and swung me round the room in my sleep, bounced me off the walls, then put me back to bed! My whole body ached, and I felt very subdued and stiff in the arms, neck and shoulders. Undeterred, as I am used to this by now, I had a Sandown breakfast and off to meet up with Leanne for a 6 hour swim.

Getting in and swimming across to the Eastern Dock, I said to Leanne "Wow this is a good to be alive day today!". The cool water, and the already scorching sun made it feel as though we were in some lagoon in Europe somewhere rather than Dover Harbour. It was beautiful, if not very "patchy" with the hot/cold/hot/cold... patches of water. Some of them over by the Eastern Dock were really cold. I have no idea where they kept coming from. It was as if there was someone under the water turning on freezing cold jets of water and firing it up at us as we swum over. Very strange. 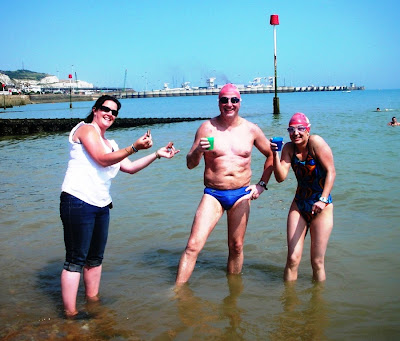 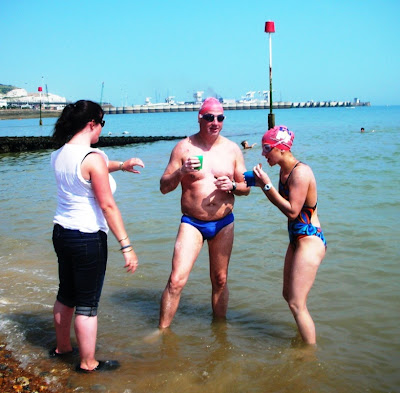 Above: Feeding at 5 hours, the last feed of the weekend. Left to right, Beccy Hopfensperger, me and Leanne. We were both absolutely famished by then.

Beccy was working non stop this weekend feeding all the swimmers as they came in. She was there all day Saturday and Sunday up and down the beach, and said that it was a good workout just feeding us! We had 1/2 bananas and chocolate mini rolls, but of course the essential "Maxim" (both the full product and Electrolyte) at all stops. We fed on both days after 2 hours for the first feed, then every hour after that. Thanks Bex, you were a star as always, as were all of the beach crew who give up their time every weekend for our benefits. 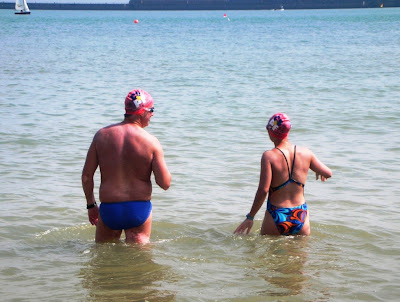 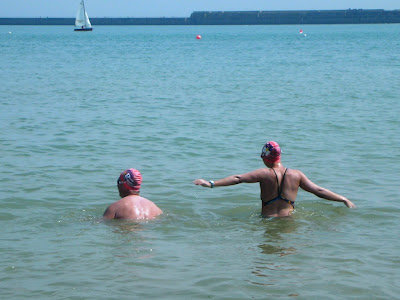 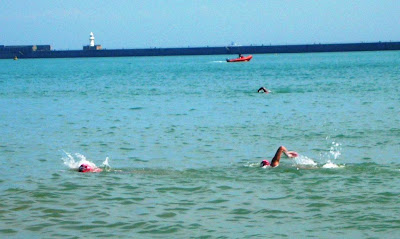 Above: Leanne and I setting off for the last swim of the day at about 5 1/2 hours into the 6 hour swim.

At 6 hours we came in, and Beccy was there to greet us with "A BIG MAC!". After Nick Adams had fed us last week, Beccy had run up to MacDonalds and got us both a Big Mac. It was great! When we got out, I was told that Nick Adams had broken the World Record swimming from Jersey to France! He had lowered the record from 7 Hrs. 47 minutes to 7 Hrs. 3 minutes. Awsome swim Nick! Well done. I'm going to have to go some to beat that!

So all in all a very successful weekend. Next weekend, it will be about 3 hours on Saturday, followed by a 2KM race at the Dover Regatta weekend. Last year I won the over 40's race, and hopefully I can do the same next week.