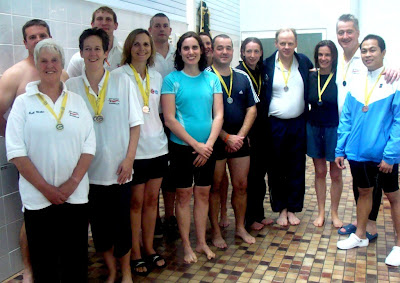 Above: Members of the West Suffolk Swimming Club Masters who competed at the 'Eastern Region Masters Championships' at the Bury St Edmunds Sports and Leisure Centre on Sunday October 05, 2008, display some of their medals at the half way stage of the competition. 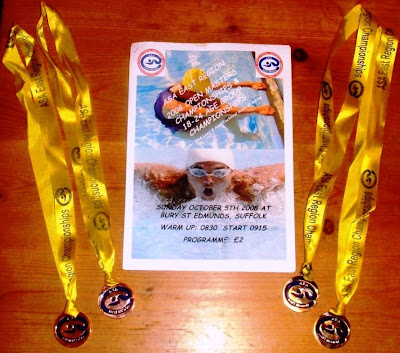 Above: My medal haul for 2008, two silver and two bronze medals from four individual and two team relay events. 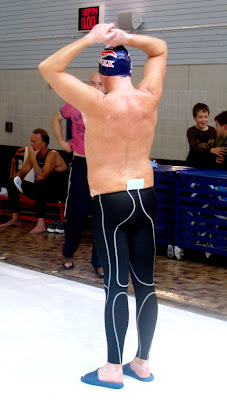 This was my first indoor pool competition since what seems like a lifetime ago at the Sudbury Valentine Masters meet on February 16, 2008. So much had happened since then, mainly in outdoor open water, that it felt very strange standing on the blocks to compete in a 400 Metres freestyle event at 09.15 on a Sunday morning in a pool I had swum so many thousands of lengths in since I was a 12 year old boy in 1975. Normally at this time on a Sunday I would be just about to turn at the Eastern Dock in Dover Harbour to head towards the Prince of Wales Pier, 15 minutes into a 6 hour swim. But not today. Today I was competing in very competitive 45-49 years old masters events against the same people I used to swim against as a lad. Steve Coe from Thetford Dolphins, Martyn Fresher of Chatteris Kingfishers and fellow English Channel Swimmer, Mark Ransom formerly of the now defunct Bury Beavers Swimming club, but now of West Suffolk Masters to name but a few. Now however, although we were much older, we were still just as competitive, if not more so!

Next up was the 50 Metres freestyle. This was a tough target set by Jim. 29.50 seconds was very fast considering that I am not a sprinter any more, but a long distance swimmer. Last year I took 2nd place in 30.12. At Sudbury I finished in 29.81. Was 29.50 possible? The gun went, and I sprinted with everything I had! Only 7 events after the 400 Metres, my arms felt very heavy. When I touched and saw my name and time up on the electronic scoreboard, I shook my head in disbelief! 30.46 seconds. That was awful. A bad time, 4th position and worst of all, no 1/2 pint of Guinness! Must do better next event.

The next event was the 100 Metres freestyle. My target time was 1:06.00. I was competing against my fellow cub member and channel swimmer Mark Ransom. 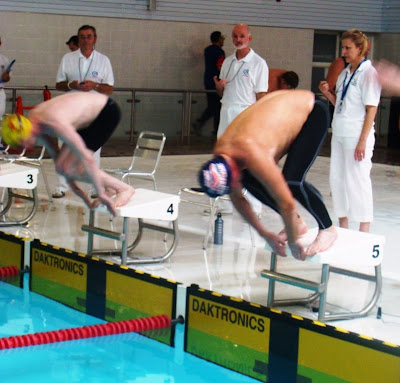 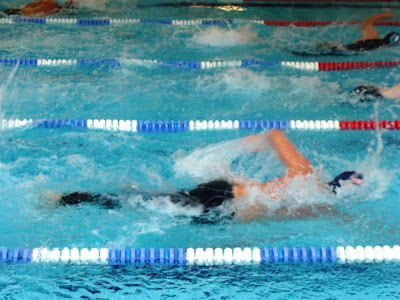 As I sprinted down the pool after a couple of hours rest, I felt much stronger. It probably helped that I had mixed up and drunk 1/2 a litre of Freda's Maxim mix as well. I felt like 'Popeye' who had just eaten his spinach. I smashed my hand into the electronic timing at the end of 100 Metres, and looked up at the electronic scoreboard. 2nd position. Silver medal and time - 1:05.31. YES! Another 1/2 pint of Guinness from Mr Boucher thank you! 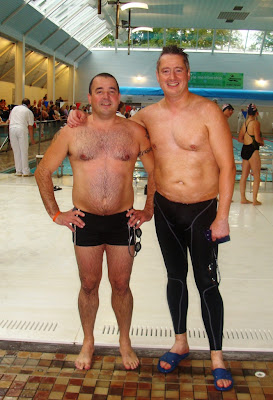 Above: With Mark Ransom after the Men's 100 Metres freestyle.

The next event was the men's 100 Metres Medley relay. I only just made it out of the 100 Metres race, ran down the other end of the pool, got my ear plugs, hat and goggles back on before taking off on the last leg. 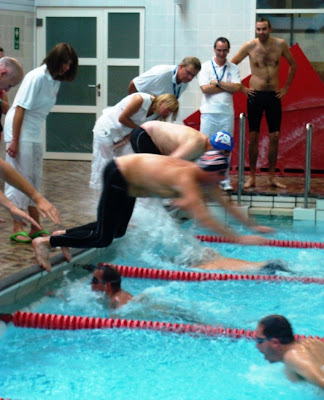 I dived in just ahead of the chap in lane 1. Unfortunately, he just pipped me at the finish and we came in in 4th position.

My last solo event was the men's 200 Metres freestyle. Jim's time to beat was 2:24.00. This was going to be tough as it was now about 5pm and we had been there since 8am. It had been a long day in hot conditions on the poolside. I had forgotten what these meets were like having spent so long in cold Dover! This was a mixed 200 Metres freestyle. This meant that men and women of all ages were in the same event, and even though you were swimming with them, you were not necessarily swimming against them. It was all to do with sex and age. I stood on the blocks and was swimming next to a girl who looked no more than about 16-17. From the programme names she was either Katie Higgon from Harwich or Cathy Thomson from Chatteris who ere competing in the 18-24 years old Senior Age Group Championships. We started and whichever one she was, she went of like a rocket. 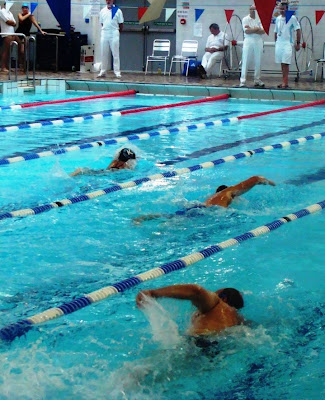 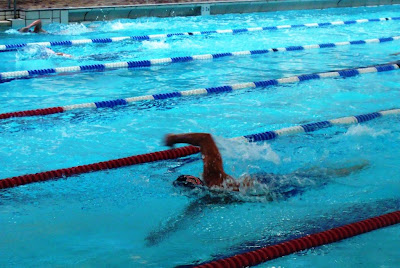 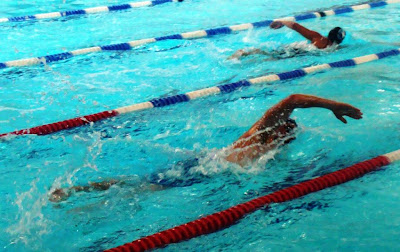 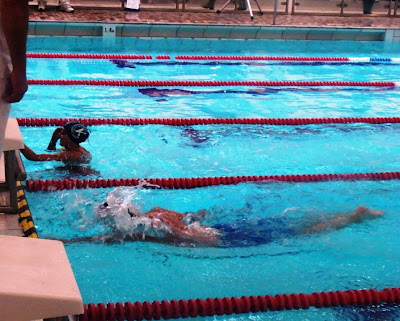 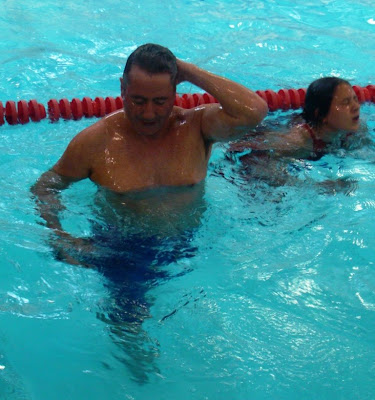 Above: Finishing and getting out of the pool at the end of the 200 Metres freestyle. Finish time: 2:25.11 and 3rd position overall.

Seeing the time up on the electronic scoreboard, I realised that another 1/2 pint of Guinness had slipped from my grasp! Jim, you only owe me a pint mate and I owe you the other one!

We had one more event to complete. The men's 100 Metres Freestyle relay. I was competing in the West Suffolk A team with Mark, Emmanuel and Tim. 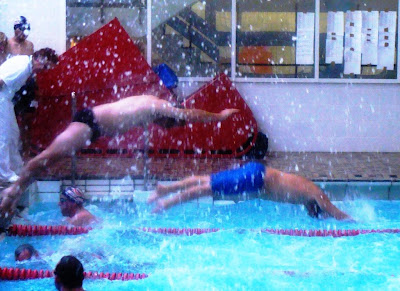 Above: Taking over from Mark Ransom (Fly) to complete the final leg (Freestyle) to take 2nd place and a silver medal. 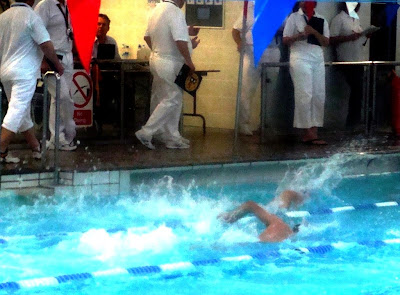 All in all it was a great day and apart from the 50 Metres freestyle, all individual swims were faster than my times for last year. The 400 Metres time I still can't believe!

While at the event, the race organiser of the British Long Distance Swimming Association event at Lynn Regis on September 1st, Stephen Smith, telephoned me with some great news. I will update the site with it later in the week when I have it confirmed.

I'm loving the mix of open water - and pool swimming on your blog Hoffy!

Good luck in Mexico - such a sweet trip!
We will be at UCLA that day for a Masters Swim Meet and I will take another stab at that 100 IM!
(English Channel swimmer returning to her sprinter roots!)

I'll keep me posted by watching your posts!
Thanks!
Ahelee