Training in Dover Harbour on a glorious autumn day in October 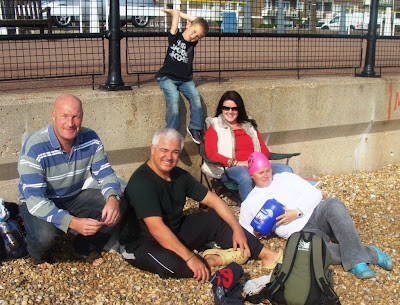 I had a couple of things to collect from my 2008 channel swim pilot, Neil Streeter, so we decided to travel the 290 mile round trip to Dover on what turned out to be a beautiful day. I needed some Maxim (channel swimmers drink) for my swim in Mexico next week, and I wanted to collect the chart of my swim which Neil had prepared. I also wanted to get a good open water training swim in as it would be the last time before Mexico. I sent an e-mail to the channel swimmers group, and was delighted to see familiar faces on the beach when we got there.

Channel Swimmers Sam Jones, Cliff Golding, Laura Lopez-Bonilla and Dave Chisolm and channel aspirant Mike Ball who will be attempting the channel in August 2009 were all there ready for a dip. Beccy setup her chair in Freda's spot and started issuing orders. It was very scary as she was very good at it. Cliff Golding took on Barrie's role of "Shingle Stomper". It was great to be here on such a sunny and warm day. 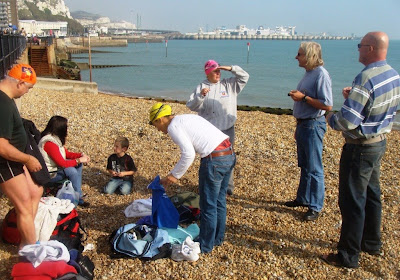 Above (Left to right): Dave, Stand in General, Sam's son Phil, Laura, Sam, Cliff and Mike get ready for our October dip. 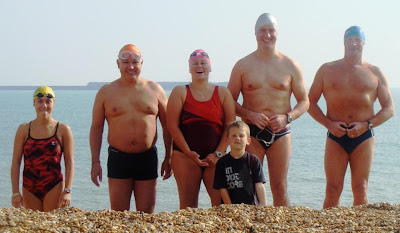 Above (Left to right): Laura, Dave, Sam & Phil, me and Mike costumes on and ready for action. 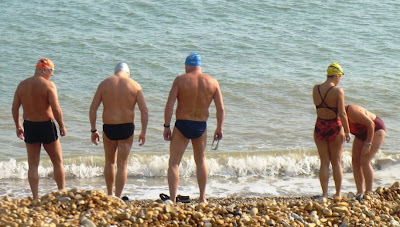 Above: I have absolutely no idea what Sam was doing to Laura here! Answers on a postcard please.... 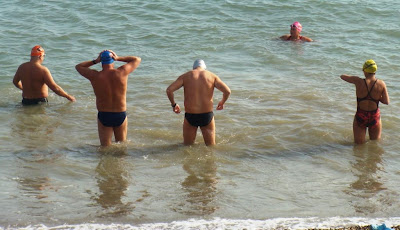 Above: ...and I have absolutely no idea what I was doing here! All I know was that it felt damn cold compared to the sauna and steam room I had been in the night before!

As we got in and set off in the dead calm water, my face went numb and I immediately got an ice-cream headache. However, it wasn't too unbearable and by the time we had swum over to the Prince of Wales Pier I felt quite happy and the temperature gauge on my watch had bottomed out at 14.8 degrees Centigrade. Quite warm really compared to some of the swims earlier in the year.

Having all stopped together at the pier, I set off on the swim I was going to do today. This was across the harbour to the Eastern Dock, back to the P.O.W. pier and then back to the beach, flat out without stopping. It was a beautiful swim, and it was so good to be back in the open water having trained in nothing but a 20 Metre pool for the past month. I sprinted the entire swim, then came into the beach having swum for an hour.

Above: In full flight passing the beach on my way back to the Prince of Wales Pier.

Arriving back at the beach, I was pleased with myself and about to get out, when I saw "The General " (Beccy), "The Shingle Stomper" (Cliff) and Sam Jone shouting and waving at me "Get back in there. Go on. Swim back to the wall and back". I was shocked for a moment, then they all laughed. It was a very scary moment, which anyone who has trained in the harbour will know what I am talking about. However, I got out and waited for Mike to come in. 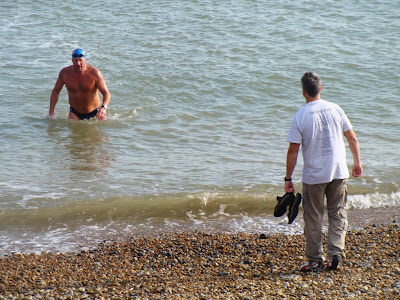 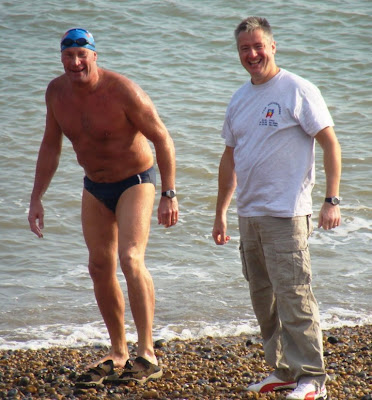 Above: 2009 Channel aspirant, Mike Ball, completes his swim. It was the latest time in the year he had ever swum in the sea and was very pleased. Well done Mike.

All in all it was a great day. I got my 2008 channel swim chart and Maxim for Mexico, had a great meal in Cullins Yard and had a great swim. Next stop, the Sumidero Canyon in Mexico on October 18th followed by our channel swimmers re-union meal organised by Nicola Millichip in Cullins Yard, Dover on Saturday 25th. Anyone who's coming, don't forget your costumes!!!
Posted on Sunday, October 12, 2008

Email ThisBlogThis!Share to TwitterShare to FacebookShare to Pinterest
Labels: Channel Training in Dover Harbour, Cold Water Training, Things to do after the channel swim