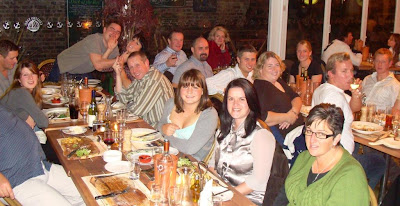 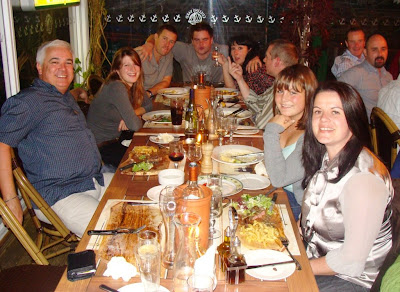 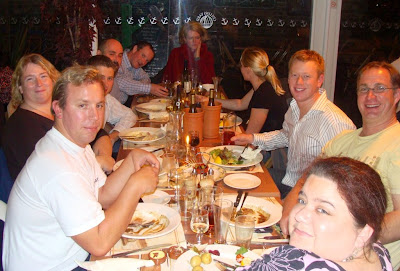 Above: Channel swimmers and their spouses/partners enjoy a re-union meal at Cullins Yard, Dover.

On Saturday October 25th, we all met in most unusual circumstances in Dover. Yes, we all had clothes on, no swimming hats and nobody recognised anyone! Two time English Channel swimmer Nicola Millichip had organised a re-union dinner this year in Dover in place of the usual French trip. It was a great turn out enjoyed I think by all. 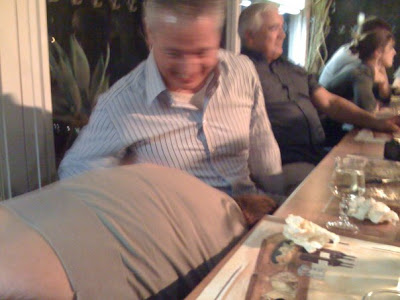 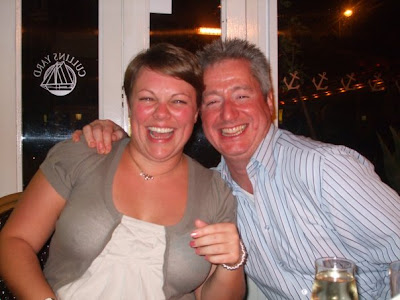 Above: Crying with laughter after Michell Toptalo had performed a rather unusual under table manoeuvre! 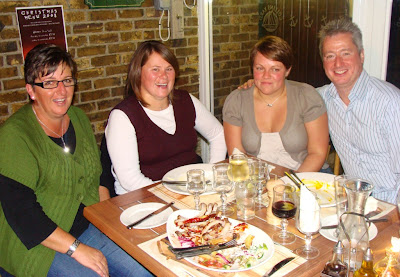 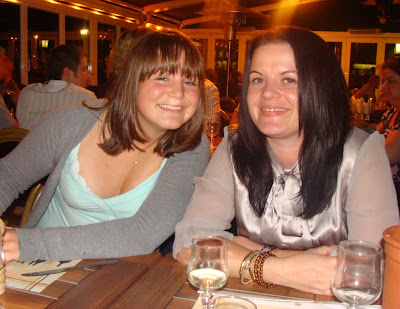 After a hearty meal in Cullins Yard, we all left and headed for the famous "White Horse" pub in Dover, where successful channel swimmers write their names on the wall along with the date of their respective swims and the swim time. 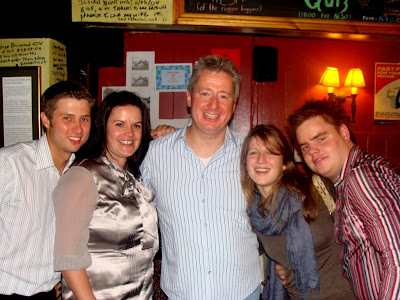 Above: Left to right: Chris Pountney, Rebecca Hopfensperger, me, Leanne Harding and Mike Cross in The White Horse pub, Dover. Some swimmers names can be seen on the wall in the background. 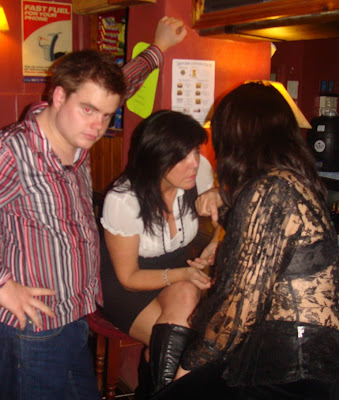 At about 1am, all feeling slightly worse for wear, Mike Cross suggested going on to another bar called "The Funky Monkey". We did, but next morning wished I hadn't! We had arranged to go for a swim in the harbour at 10am, and we staggered back to our bed and breakfast at about 3am!

Sometime in the morning I heard a text message come into my phone as I opened my eyes and laid there with my head pounding! Thump. Thump. Thump...it went on. "Never again" I thought to myself, as I shut my eyes to go back to sleep. The text messages went like this:-

I had just devoured a full Sandown Guest House fry up and two paracetamols! Beccy took one look at her breakfast, and couldn't eat a thing. She sat in the car and didn't leave it until we arrived back in Bury some 4 hours later!

I arrived down at the beach on a wet cold, miserable Dover morning. It was just like summer again! Most people had been in already, and Sam Jones and Emma France were still in there. I reluctantly undressed, and headed for the water. 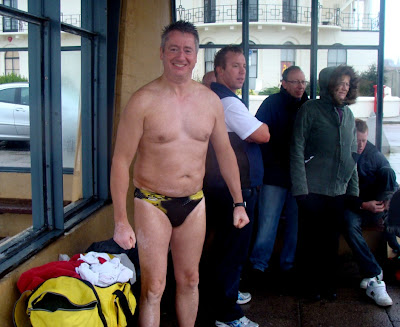 Above: Undressing and heading for the sea on a typical day in Dover harbour! 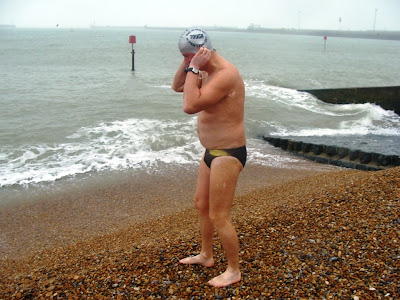 Above: Putting my CS&PF swim cap on, and treading the shingles tenderly so as not to disturb my aching head!

Emma and Sam were playing in the sea, and shouting at me to get in. The tide was in and so I walked towards the water.... 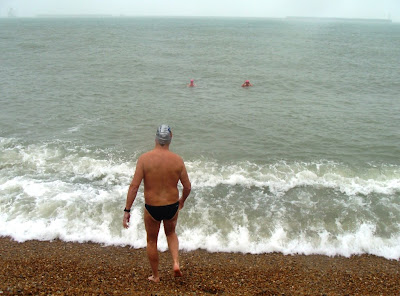 ...stepped in, and before I knew it, I was up to my neck. It took my breath away! I couldn't breath. I was gasping for air, it felt so cold. Only the week before I was swimming in 27 degree water in Mexico. This was 14 degrees but felt much colder. I swam out to Emma and Sam... 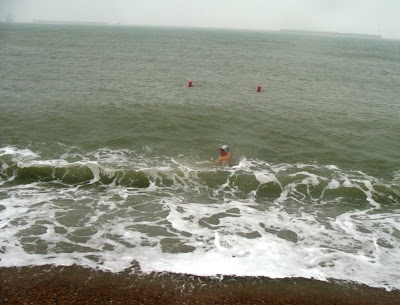 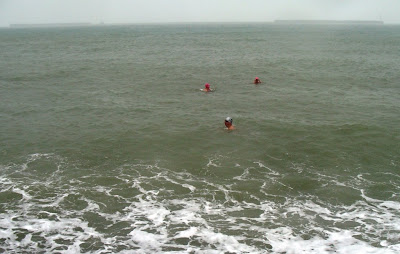 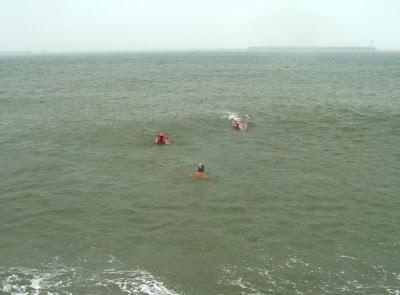 ...then swam back and got out! I had swum the best part of 30 Metres in total, and been in the water for a whole 3 minutes! Very impressive, but it certainly cleared my head! 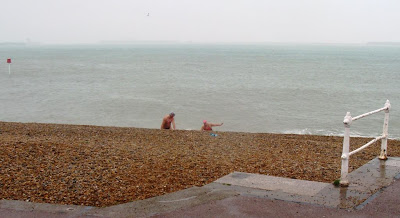 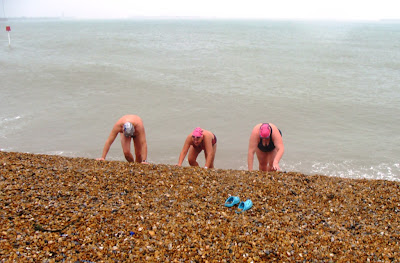 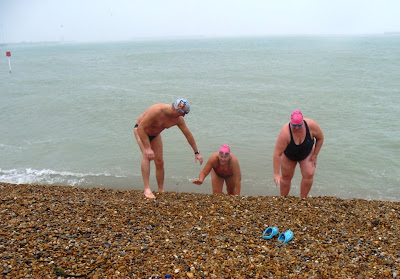 Above: What a fine set! We all stagger up the steep incline that is Dover Beach when the tide is in. It's much easier when Barrie is there to assist! 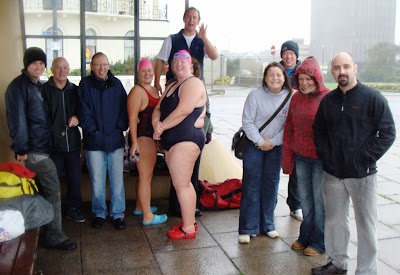 Above: The last photo shoot of the season. Second left, is Barrie 'The Shingle Stomper' Wakeham. Where were you when we were trying to get out Barrie?!

I would like to thank Nicola Millichip for organising the weekend. We had a great time, and look forward to being back again in March for the Channel Swimming & Piloting Federation AGM and dinner.
Posted on Tuesday, November 11, 2008

Email ThisBlogThis!Share to TwitterShare to FacebookShare to Pinterest
Labels: Things to do after the channel swim

I love the pic of you being a gent and assisting the ladies from the water. Mad fools the lot of you - LOL

Grumps - It was the least I could do! LOL.