If anyone is training for The English Channel in 2009 or later, I would strongly recommend entering the 2009 UK Cold Water Swimming Championships hosted by the South London Swimming Club at the fabulous Tooting Bec Lido. It is being held on January 24, 2009 and is a fantastic opportunity to get the feel of what it's like to swim in very cold water, and to meet and chat to channel swimmers, pick up tips and share experiences with other cold water swimmers very early in the season. 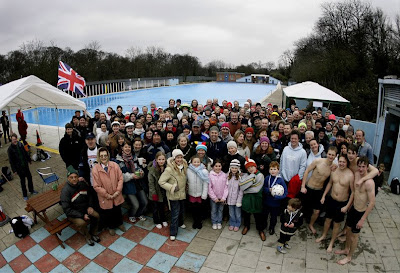 Above: Some of the participants at the 2007 UK Cold Water Swimming Championships at the Tooting Bec Lido, London, UK.

I first competed there in March 2007 (pictured above) then again at the 2008 World Cold Water Championships which were held there in February this year.

Further information can be found by clicking here
Posted on Sunday, November 23, 2008