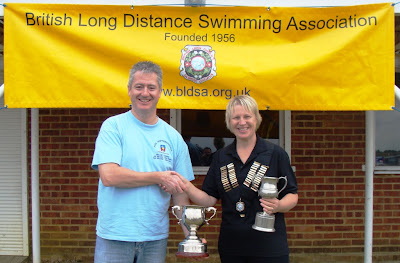 Above: British Long Distance Swimming Association (BLDSA) 2009 President, Jacky Classen, with me prior to handing back the 'Senior Men' (right) and 'Veteran Mens' (left) Trophies which I won at the 2008 Lynn Regis event - eventually! (click here for more).

On Saturday September 26, 2009 we set off for Kings Lynn in North Norfolk, to hand back the two trophies I had won at the 2008 BLDSA Lynn Regis Championship. Not having swum much this year, I would not be trying to defend my titles, but will hopefully be able to do so next year. When we got there we sat next to the BLDSA Hon Publicity Officer, and English Channel Swimmer, Dee Llewellwyn who I had such a great race with last year. She told me she had been ill for much of the year so was also not swimming. We wish you a speedy recovery Dee. 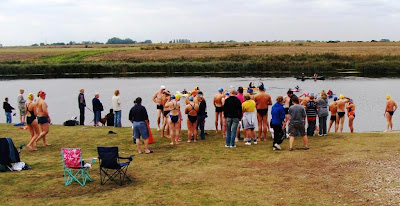 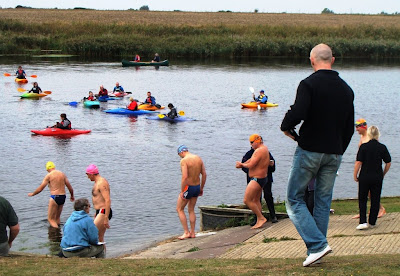 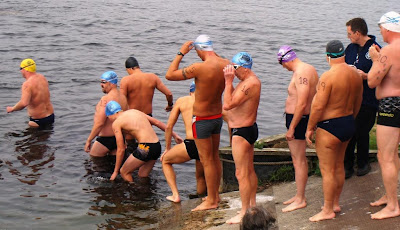 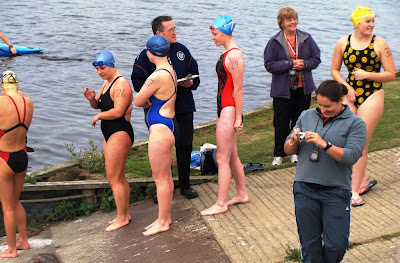 Above: Swimmers enter the water. Second left, No. 26, is 2009 2 Way English Channel Swimmer, Lianne Llewellyn and her sister Dee, holding the camera at the front. 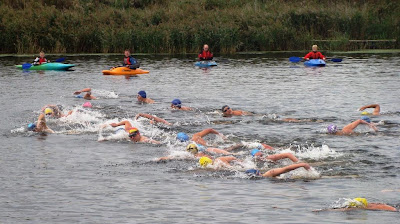 Above: The start of the 4.5KM race in The River Ouse, Kings Lynn, Norfolk. 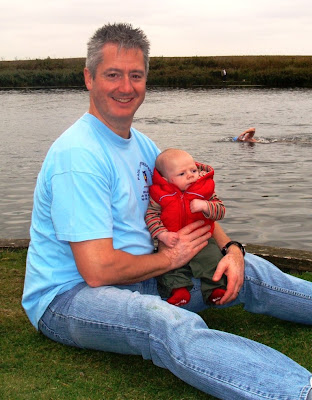 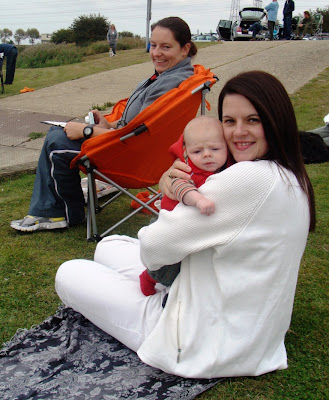 Above: Beccy and I watch this years race with Luca and Dee Llewellyn. 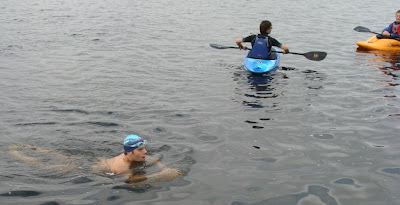 Above: 2009 Senior Men's Winner and 2009 English Channel Swimmer, Ollie Wilkinson who won the race in 59.3 minutes.

After the race, we headed up to the beach in Hunstanton. The sun came out and it turned into a beautiful and very hot day. During the day, we started the ball rolling to organise a pretty unique swimming challenge for summer 2010. I will update the blog very soon with further information as soon as it is finalised.
Posted on Monday, September 28, 2009

Great to see you on the day Hoffy. Nice photos but you missed my butterfly finish! Good luck with the swim, sounds bloody amazing. Won't be around to race you for the title next year but 2011 watch out! Ollie.

Ollie - It took me by surprise that's why! LOL. Look forward to seeing you in 2011 then! Cheers. Hoffy.