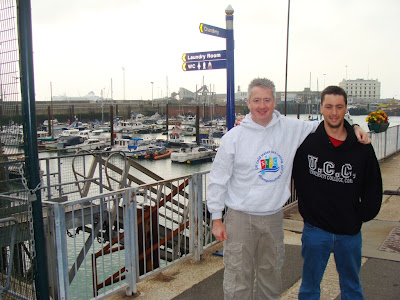 Above: Me (left) with Sylvain Estadieu on the quayside at Dover Marina prior to his 14 hour 44 minute successful swim of The English Channel on Sunday September 20, 2009.

On Sunday September 20th, I was one of three crew members to crew for Sylvain Estadieu, a French national currently living in Ireland. The other two were Niall MacCarthy, a Sandycove Swimmer from Ireland, and Dan Martin who will be attempting to swim the Atlantic in 2010. We had stayed the night in Lisa Cummins's caravan at Varne Ridge the night before. Lisa was just hours away from completing a historic, 35 hours and 20 minute 2 way channel swim, the first Irish person and only the 20th person in history to complete a 2 way (click here for further information). We boarded 'Gallivant' captained by CS&PF Honoury Secretary, Mike Oram, and set off for Samphire Hoe. 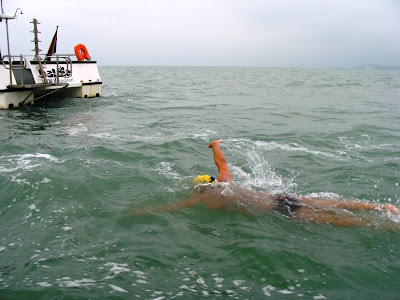 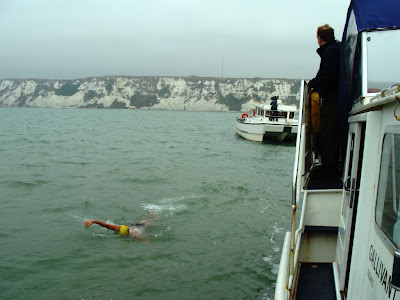 We hadn't gone out far when a Belgian film crew pulled up and started filming Sylvain. Dan, speaking excellent French, found out that they were doing a documentary on swimming the English Channel. They were a bit invasive, at one stage the cameraman entering the water, swimming up to within about 3 Metres of Sylvain and filming him in the water. However, after about an hour they sped off into the distance. 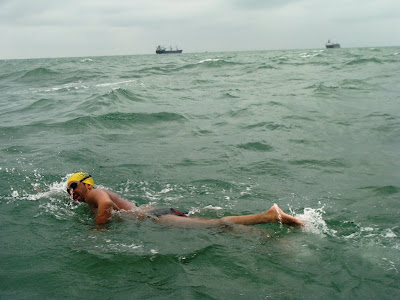 Above: In the South West shipping lane, dodging the oil tankers.

It had started fairly calmly, but the wind and therefore the waves really picked up and I actually felt quite cold on deck. Niall did a sterling job mixing the Maxim feeds, while Dan and I took it in turns feeding him. It was good teamwork, and an essential part of a channel swim. He fed every hour for the first 3 hours, and every 1/2 hour after that. It worked perfectly. 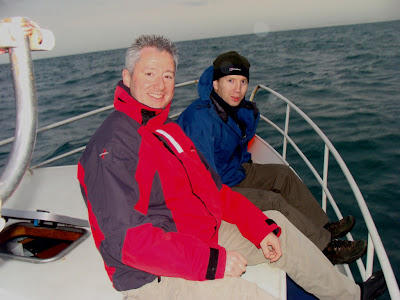 Above: Niall and I on deck watching Sylvain on his swim. It is important that at least one person watches the swimmer at all times. 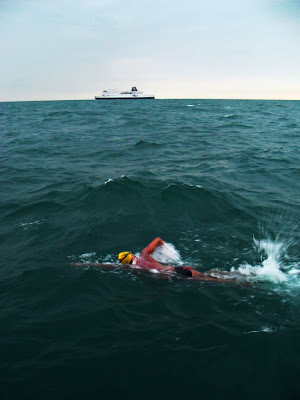 Above: The P&O and Sea France ferries can be constantly seen on any channel swim.