Final Open Water training swim before The 2010 Great East Swim means only one thing - Trialling out a wetsuit! 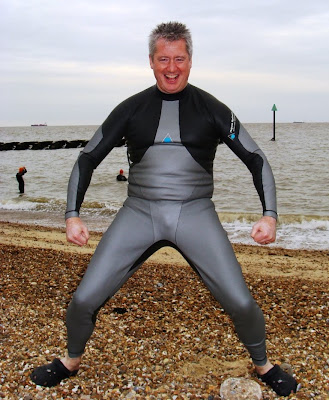 Above: Something I'd never thought I'd see - me in a wetsuit, a necessity for The British Gas Great Swim Series if the water temperature is below 15 Degrees C. Hopefully it won't be! As I write it is 17.7 Degrees C in Alton Water Sports Centre, Ipswich. Looking good for no wetsuit! For a full set of rules and everything else about the event, click this link to download the '.PDF' brochure.

I had been dreading Sunday's swim for some weeks, but knew it had to come. I have never swum any significant distance in a wetsuit before, but I had to trial one before next Saturday's Great East Swim, just in case we have to wear one. If the water temperature is correct on the website @ 17.7C, we won't have to, but I had to be prepared. I put it on, and immediately felt confined, inhibited, cramped, enclosed. Call it what you like. I hated it and hadn't even got in the water yet. 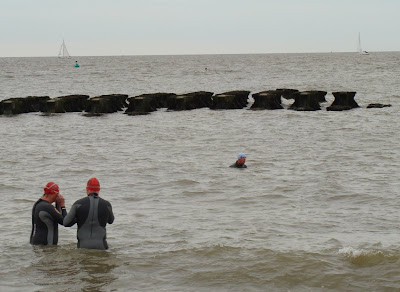 As I stepped into the water with 2011 English Channel Aspirant Tracy Van Dyk, who was also wearing one in training for next weeks race, I noticed something immediately. Not only did I not feel cold, I couldn't feel anything. The suit totally kept me warm, and I didn't even feel as though I was in the water. If ever this was cheating at something, this was it! I started swimming and couldn't wait to touch the pier, get back and take this damn thing off. 3,100 Metres here I come at full speed! 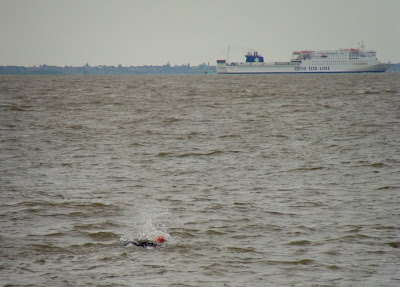 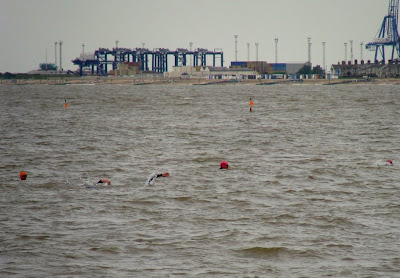 The sea today was really choppy, and reminded me of my second English Channel swim. This was great practice as we were out in the elements here, out in The North Sea amid the wind and waves. Just like The English Channel. I thought about Tracy and thought what good practice this was for her, as well as for me for The Wash, if only we didn't have these damn wetsuits on! 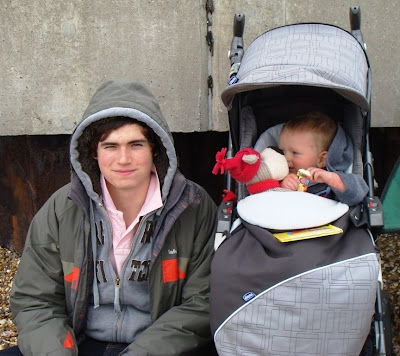 'Little Hoffy' was with us today, along with 'Tiny Hoffy'. Little Hoffy was helping on the beach and taking photos, so thanks very much for that Baz.

At about 600 Metres towards the pier, I did what seasoned wetsuit swimmers would probably laugh at. I felt an air bubble down my neck, so stopped and pulled the wetsuit forward to let the air out. Or so I thought. What I actually did was let about 10 pints of water down the front of the suit, adding god knows how much cold water weight to my body! It felt cold and bloody awful. What an idiot! However, I carried on, touched the pier and headed back.

As I came ashore to feed and take the suit off, I asked Beccy where everyone was? "They've all got out" she said. I couldn't believe it! Must have been the wetsuits! 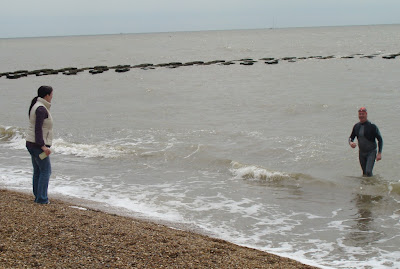 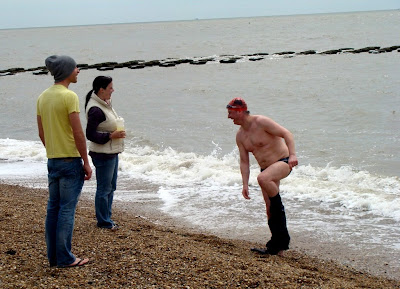 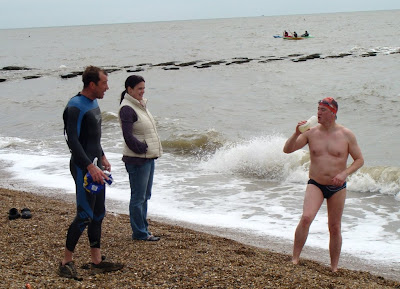 Fellow swimmers Chris Shutt and Philip Beer appeared, Philip to say goodbye as he had completed his training now for an event next week, and wouldn't be coming again. I got the suit off, had my feed and set off, suddenly feeling free without the water filled wetsuit on! 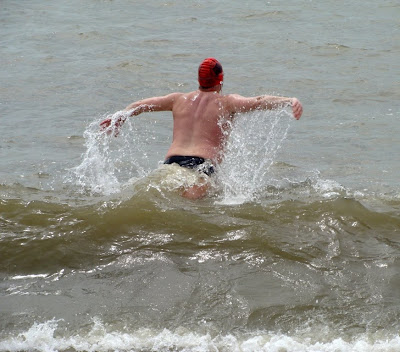 www.HoffyFlies.com? (Not really!!!) Great photo by Little Hoffy though!

Anyway, I set off back towards the pier for the second leg, and it started getting really rough in there. I was swimming against the tide, and it seemed to take forever to get to the pier. About half way down I saw Little Hoffy pushing Tiny Hoffy along the promenade, and it spurned me on as I tried to keep up with them. I eventually touched the pier, turned round and headed for home. For the first time this year, my shoulders were really hurting. The sea was getting rougher and rougher, and it was getting tough. But I just put one arm in front of the other, and completed the 6,200 Metre swim in 1 Hr. 58 Minutes. 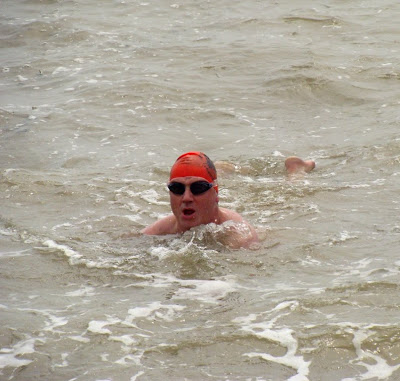 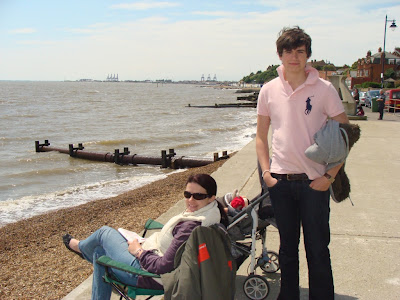 Lanolin works better this also Paul, just like real swimming. I used to wear a wetsuit for swimming, and could never get beyond about 1hr 30 mins without chafing.
You usually wear a rash vest with it also.

Thanks Donal. I have checked the water temperature and it is 17.5 in the water we will swim in. Thankfully we won't have to wear them if it stays like this. I don't ever want to wear one again! I have put a post up about your swim. Hope it's OK?