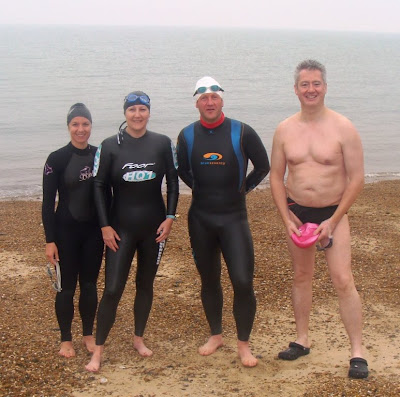 Above: Suffolk Open Water Swimmers preparing for our respective swims on Sunday June 06, 2010.

After last week's disappointing outcome for me personally, I read through some of my NLP notes during the week and re-energised my mind ready for this week's swim. For anyone who is not familiar with NLP, which I have used for all of my open water swims and to coach other athletes, below can be found the 'Principles of NLP' which can also be defined as 'The Principles for Success':-

The Principles for Success

1. Know Your Outcome (Goal). If you can define your outcome appropriately, then the outcome will be more achievable. Don't start anything without knowing your outcome in advance.

3. Have Behavioural Flexibility. Be willing to do whatever it takes to achieve success. This is the key. With enough rapport and enough behavioural flexibility, you can always achieve your goals.

4. Build and Maintain Rapport. Create a climate of trust and co-operation.

5. Operate From a Physiology and Psychology of Excellence. Operate from a totally resourcefully state. Do things that will empower you.

6.Take Action Now! Without action there are no results.

As part of this, I re-evaluated training techniques, and surprised myself with what I found out! I concluded that from now on, I am not aiming for 'set hours' in open water, i.e. 2 hours, 3 hours etc., I am aiming for increased distance each time, predetermined before I get in the water. After all, what is the point in hanging around in the water for 2-3 minutes at the end of a session, just to "complete 2 hours". You wouldn't do that if you'd just touched land in France would you? Would you honestly say "Actually, if I just bob around in the water for 8 more minutes, it will have taken me 14 hours!". No of course not, it's nonsense. Multi-channel swimmer Nick Adams once said to me "It's not how long you're in the water Hoffy, it's what you do when you are in there that matters.". How right he was. It's a pity it's taken me so long to realise what he meant.

With that in mind, knowing that the distance to the pier from the beach was 1,550 Metres, I had decided before I got to Felixstowe, that I was going to the pier and back twice, a total distance of 6,200 Metres, which would be in the region of a two hour swim, give or take a few minutes. Based on pool times of a similar distance, it would be around 1 hr. 55 minutes, but with the tides etc., I would wait and see.

The three wet suited swimmers Heidi, Donna and Dave got in, and I followed into the 12 degrees Centigrade water, which on a really dull, grey but humid day, felt colder. I set off to the pier at a good pace, mentally knowing that this wasn't going to be a "2 hour swim", it was going to be a "6.2KM swim". The faster I did it, the quicker I could get out. That makes far more sense to me! 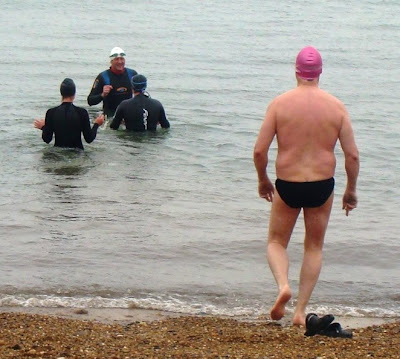 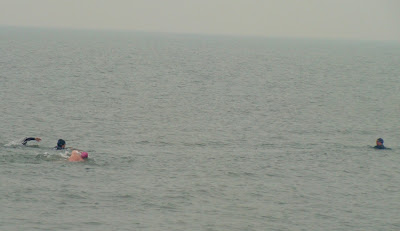 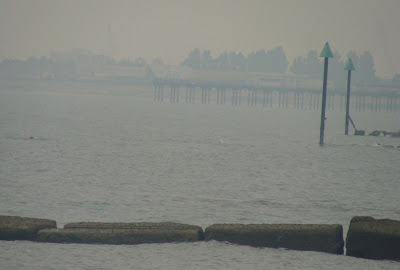 I reached the pier and felt good. As I turned, a seagull was watching me from the railings above. I touched an area which was barnacle free, having completed 1,550 Metres, and set off back towards the beach where I would be fed by Beccy. I was swimming to my first and only feed of this swim. I kept an eye on the seagull, who kept his eye on me. I imagined him dive bombing and pecking my bum! It made me laugh, but also made me swim faster! lol.

I reached the beach, and Beccy fed me my warm drink. I now use Herbalife H30 Pro to feed on rather than Maxim. It's not so sickly, tastes great and is designed specifically for sports people. My time for 3,100 Metres was 55 minutes. I was pleased with this and set off for the pier and back again. I waved at Heidi who was up on the promenade getting changed, and got into a rhythm again. 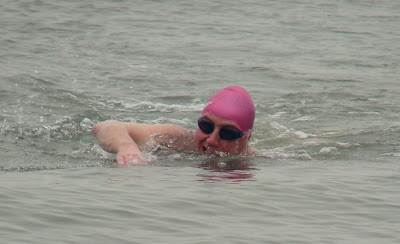 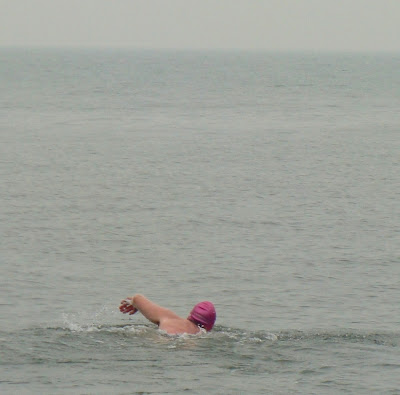 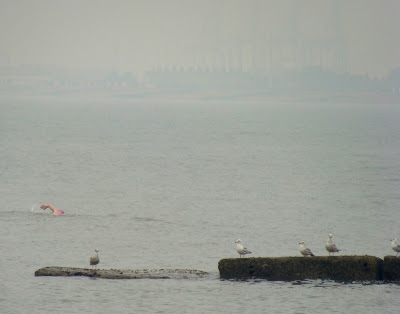 At the pier, I looked up, and there he still sat. I couldn't believe it. That seagull still sat there on the railing. I think he was waiting for me. Off I shot again, not giving him the chance to even think about pecking!

Anyway, there I was swimming along minding my own business, and as I looked up I saw in the distance what looked like a bare arm (i.e. no wetsuit). I swam towards the arm, and stopped to talk to a guy called Nick who it turned out was training for a Gibraltar Straight crossing this year and an English Channel swim next year. As we chatted he said "Are you Paul?". I said "Yes". He laughed and said "I've been reading your websites". Unbelievable. Swimming along out in the middle of The North Sea and you bump into someone who knows you! Small world.

I sprinted the last section into the beach, finishing 6.2KM in a time of 1 Hr. 53 Minutes. I was well pleased, and felt so much happier than I had a week earlier! 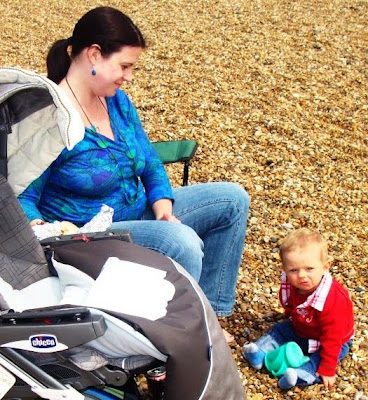 I had a picnic on the beach with Beccy (who is now heavily pregnant and still supporting me greatly, thanks Bex) and Luca who had been shouting "Da Da Da Da Da" all the time I was out there.

Same time next week, but I will have to trial a wetsuit out ready for The Great East Swim in two weeks time. Should be interesting as I have only ever swum about 300 Metres in one, and that was only once. Well done everyone who turned up this week, we are all heading steadily towards our goals. Keep up the good work.
Posted on Tuesday, June 08, 2010

Hi Hoff
Great reading and something for me to think about.

Inconsistent week and hope to better over the next couple. Well done on the swim. I told you you would be back to your self quickly

Thanks Enda. It's all about mindset isn't it? Hope you have a good week and get the KM's up. Cheers mate. Hoffy.