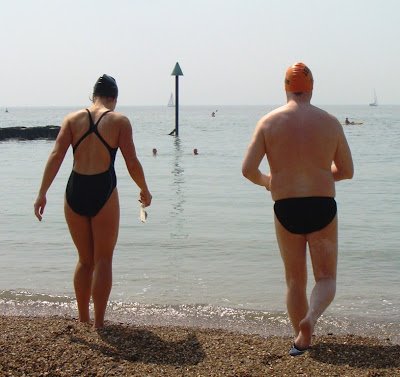 Above: Heidi McDowell and I enter the North Sea at Felixstowe on the hottest day of the year so far. For Heidi it was her first time without a wetsuit. Well done! 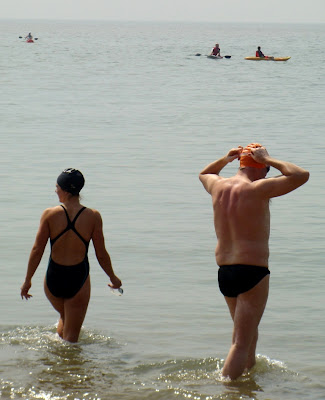 Following last weeks Great East Swim, I managed to pull a muscle in my left trapezius muscle picking a towel up off the bathroom floor. I keep telling Beccy that this picking up towel business is a dangerous pastime for us elite athletes. Bathroom towels are supposed to be left on the floor! Anyway, that aside, it hampered my training last week, with Beccy having to massage and Kinesio tape the area to assist healing. So as I entered the sea on Sunday, it was the first time since The Great East swim. 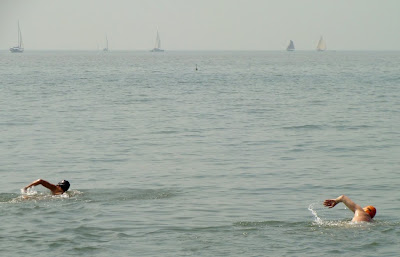 Heidi and I were the only two members of the Suffolk Open Water Swimming group who turned up this week, probably due to some football match going on in South Africa where The Sausage Eaters' were about to slay 'St. Georges Dragons' by 4 sausages to 1. They should have come swimming instead. It was a simply glorious day during which I had a beautiful swim down to the Spa Pavilion with Heidi where she turned round and went back while I continued on my way to the pier and back. 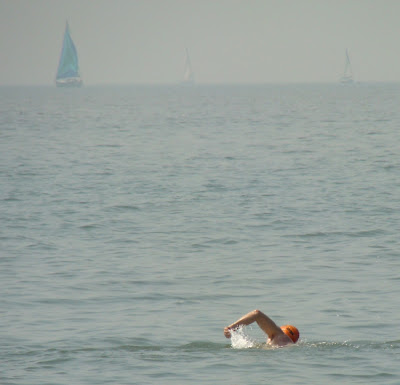 The trapezius muscle held out OK. A bit sore, but it was only pain after all. I completed 3,100 Metres before the beach crew, (pictured below) who had spent their time in a small tent this week to protect themselves from the searing sun, packed up, had a quick sausage and chips and headed home to watch the football. 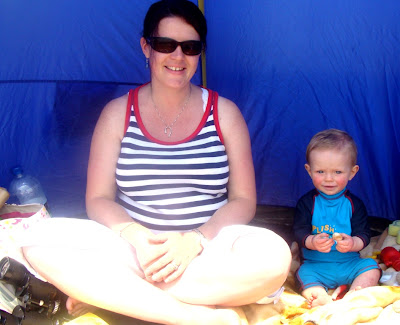 Last night I completed 4,000 Metres in the pool with no problems and will hit the pool again tonight. Well not actually hit it, swim in it I mean!

Next Saturday is The Great London Swim, but there is a slight problem. I am swimming in Iryna Kennedy's English Channel Relay on the July 01 - 10, July and there is a chance the two swims will clash. The relay will most definitely take preference should the two clash. I will keep the blog updated when I know more. Meanwhile, it's just train, train, train this week!
Posted on Tuesday, June 29, 2010