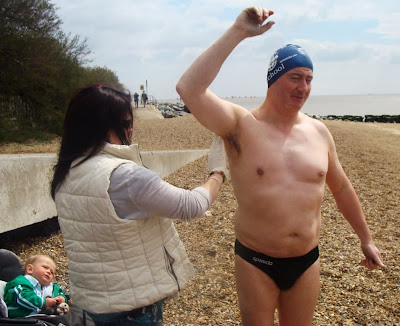 Above and below: Beccy applies Vaseline to the armpits, neck, side of face and groin areas to avoid chafing in the sea, while Luca wonders what on earth she is doing! 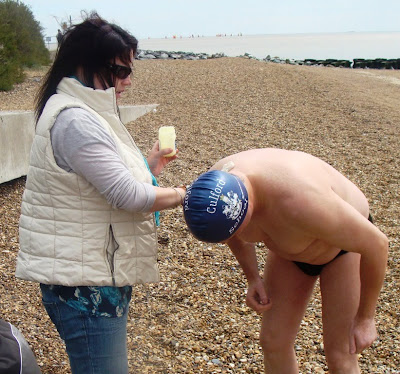 This week has been an extremely busy week. It has been very good for business on Tuesday completing 19 massages! However, it has really taken it out of me physically. I only managed two pool sessions; 4,100 Metres at Culford School pool on Tuesday (after the massages) and 3,000 Metres on Wednesday. It was then Sunday before I got in the water again with the Suffolk Open Water Swimming group @ Felixstowe, via a 200 mile round trip to Grantham on Saturday for business. 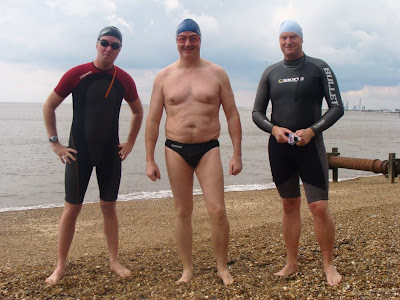 On Sunday, there were just three of us turned up for sea swim, Nathan Pittam (left), me and a new member, Jim Dinley. We are all doing The Great East Swim in three weeks time, and shortly I will have to try swimming in a wetsuit for a mile, something I have never done before. As we pulled up to the beach in the car, I noticed what a disgusting colour it was. It looked all churned up and sandy coloured up to 100 Metres from the coast, and differing colours after that.

After the tropical conditions of last Sunday, today was cold with a brisk wind coming in across The North Sea. Although it wasn't raining, it felt colder than any week we had encountered before. I was not looking forward to getting in, and my body felt physically weak after my busy week. 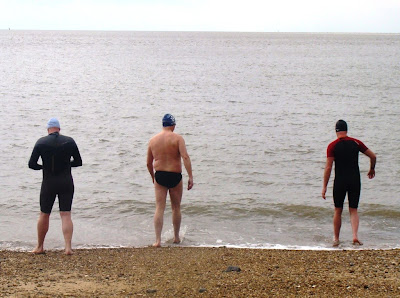 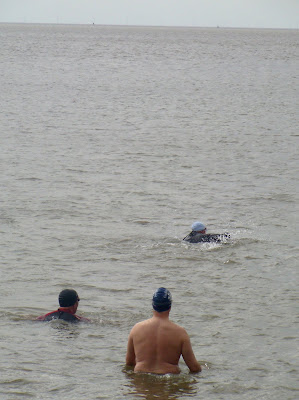 It felt bloody freezing. I knew it would, and of course as you think, so you attract. I had told myself it would be cold, and it was. I should know better. I set off on my swim and my arms felt heavy. I had forgotten to put my spray into my goggles and they kept steaming up. Already, this felt a shitty swim. I thought about Enda in Ireland, and wondered how he was doing? I knew he would do 2.25 hours as his mental attitude was now definitely in the right place. Mine wasn't. The cool wind was blowing on my back and I started to feel cold. Eventually, I made it to the pier (1,550 Metres) turned round and started to head back. I thought of Beccy and Luca on the beach and thought that they would also be cold and alone on the beach. There was no one else there on the beach this week, and it wasn't fair for them to sit there on their own.

Half way back I saw a couple of Kyakers heading in the opposite direction and started to feel really heavy in the arms. Eventually I reached the beach and Nathan and Jim were already out and dressed sitting with Beccy and Luca. They said their goodbye's as Beccy fed me, then they left for home. 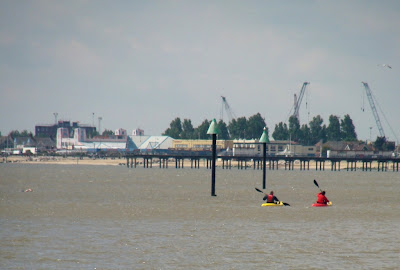 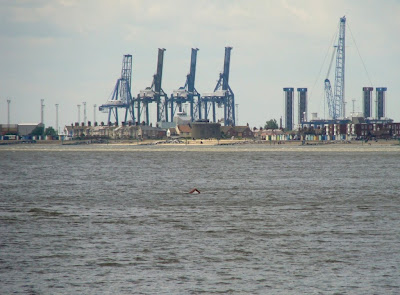 Don't be too hard on yourself Paul. All goals have setbacks - the key is noticing them and working to overcome them! You still did more in the sea than last week so thats surely progress.

Not easy after doing all the massages. Your working all the muscles you use for swimming. Whilst you didnt swim much this week as you said, lets just say your Local Muscle Endurance was put in to use with the work you had to do.
Dont be hard on yourself. You know better than anyone you have to listen to your body.

Regards to becky and all the Junior Hoffs