Start of 2010 Charity Fundraising - This year for St. Nicholas' Hospice by swimming The Wash & other events... 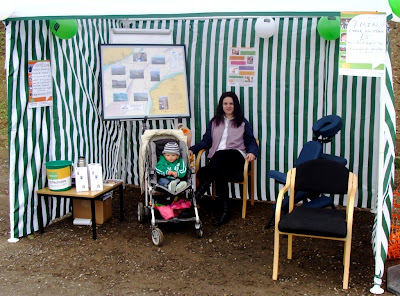 We were delighted to kick start our 2010 charity fundraising, which this year is for St. Nicholas Hospice, Bury St Edmunds, when we were asked by Michelle Gray, Senior Fundraising Manager for St. Nicholas Hospice, to man a stall at the URL International Rugby Sevens tournament on May 9th. The idea was to give chair massages to people which is what we do as part of our business, and for them to donate to our fund for swimming 'The Wash'. Baz and I set the stand up in the morning, thanks very much to him for this, and Beccy and Luca helped man the stall prior to the tournament starting and during it. 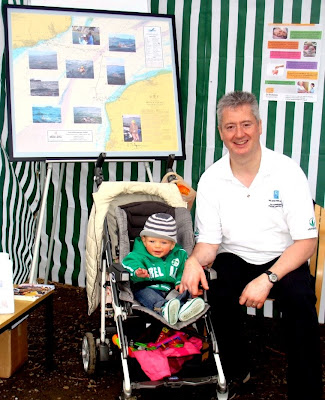 Left: Luca and I wait for the people to arrive prior to the start of the event which kicked off at 11am.

We were situated in the car park area of the ground, and I have to say that it wasn't the best location to get people to come for a massage. As they walked into the ground, they were looking the other way, i.e. at the rugby which is understandable, and I had to run over with the bucket on many occasions just to catch the people's eye.

However, that said, we did a few massages, spoke to many people about swimming The Wash, and showed them the route of my 2007 English Channel swim to try to explain what will happen during the swim of The Wash. People are constantly amazed that you do not swim in a straight line when you swim The Channel. They also think that you swim from Dover to Calais, imagining that you enter Calais harbour alongside one of the P&O Ferries, docking just like a ferry. They are totally amazed when you explain how it all actually happens. The Wash, I explained will be very similar, i.e. A large "S" shape which will mean probably being out in The North Sea for some considerable time before coming back into The Wash. 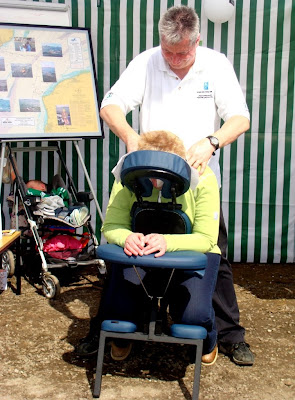 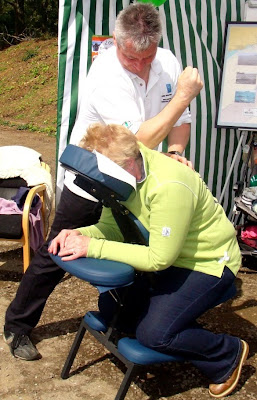 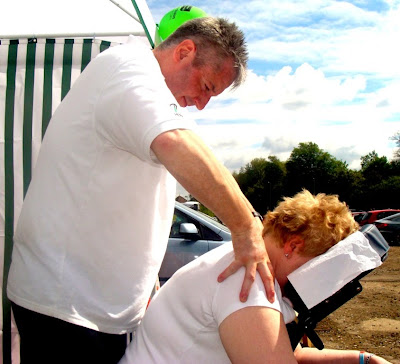 Above: A lady from Hereford was really pleased when I relieved all the tension in her neck by giving her a 15 minute chair massage.

The day was really enjoyable. The rugby was excellent (England St George running out as winners) and we collected £151.55p from people. This coupled with the 71 printer cartridges collected from Suffolk County Council meant we started our 2010 campaign off with £222.55p. A good start. If anyone would like to donate, please feel free to do so by clicking on the secure JustGiving widget below or opposite. Thank you in anticipation.