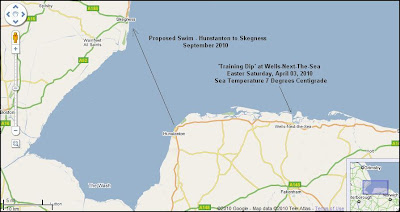 Above: Google map of 'The Wash' with route of proposed swim from Hunstanton to Skegness and Wells-Next-The-Sea where I took a dip on Saturday April 03, 2010.

Since my last major swim, which was in The Sumidero Canyon, Mexico on October 18, 2008, so much has happened, and Beccy and I have gone through some majorly tough financial times due to the world-wide recession, which hit our business like so many others. I have not completed a training session in a pool since Thursday October 16, 2008 in Tuxtla Gutierrez, Mexico. We had to sell our IT business after 12 years. We both totally re-trained and started a new business from scratch, investing every penny we earned into training courses and equipment. We had to cancel all swims last year due to the afore-mentioned, and Beccy gave birth to our son Luca in July 2009. We then formed IOWSA and have struggled to find a suitably qualified pilot who was willing to pilot me across my proposed swim of The Wash in 2010. We are now delighted that Beccy is expecting our second child in October 2010. What a year of mixed emotions and difficulties. But that's what life is all about is it not? Opportunity mixed with difficulty. You just have to keep going, set your goals and believe in what you are doing, no matter what. That said, we set off for the North Norfolk coast on a cool but sunny Easter Saturday, April 03, 2010. Mission: 1) To find a pilot boat. 2) To take my first swim in the sea for 2010. 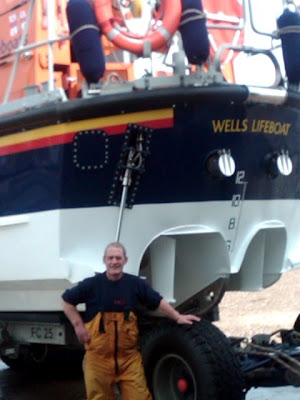 Above: Alan Frary, Coxwain (or 'Coxun' as they pronounce it in Norfolk) of the R.N.L.I. Life Boat in Wells-Next-The-Sea. 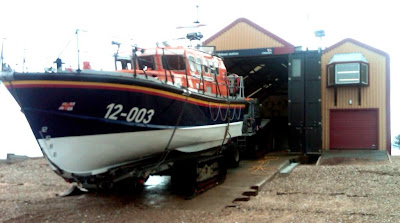 Above: The R.N.L.I. Life Boat in Wells-Next-The-Sea.

After arriving in Wells, and meeting up with the in-laws and devouring some of Wells's finest fish and chips, we walked the incredibly long promenade to reach the beach. My oldest son Baz, was on his way down in the car, so I wanted to wait for him before I went in for a dip. The sun was out, it was a beautiful cool April day, and I couldn't wait to get in, however, I wanted to find a pilot boat, so headed for the R.N.L.I. station at the end of the promenade. Having spent about 15 minutes with R.N.L.I. Coxwain Alan Frary, he gave me three useful names and telephone numbers of fishermen who may be able to help me. He showed me some charts of 'The Wash', told me the water temperature today was 7 degrees Centigrade, and we could clearly see the wind farm off the coast of Skegness, the other side of 'The Wash'. I could now begin to visualise and feel the swim, and get a sense of the task ahead. I thanked him, and left to join up with the others who wanted to walk along the beach.

When Baz telephoned to say he was nearly there, I walked all the way back to the harbour to meet up with him and collect my swim bag. Then after a very tough walk through the sand, we met up with everyone on the beach. The tide had been out ever since we arrived, and when it goes out in Wells, it really goes out. Since I had walked back to the harbour and returned, it had gone out even further. So far in fact, that I could barely see the waters edge in the distance! I was determined to go in though.

My father-in-law carried Luca, and I battled for what seemed hours with the pushchair in the sand to get to the water's edge to get in the sea. However, the further we walked, it just kept getting further away!!! Eventually, I was so tired and hot, I undressed, got me Speedos, hat, goggles and earplugs on, and headed for the water. My legs were really tired. I felt as though I had been pushing a car up hill for about an hour. That's what it was like pushing a push chair through the sand. 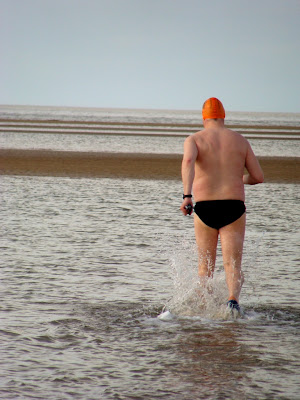 Above: Undressed and heading out into the deep waters of 'The Wash' for my first sea swim of the year.

As I ran through the near 4 inches of water, the cool water splashed on my feet and it felt good! I could see the sand up ahead, and just as it got really deep (5 inches) it started to get shallower again, and I walked out onto the sand! 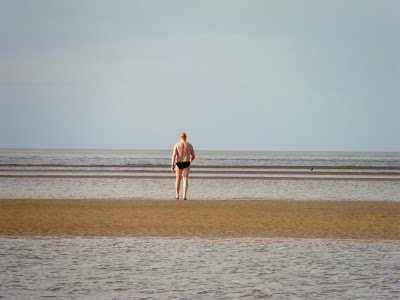 I kept going and going, but as I looked ahead, I could see the water still going out, and I could see that it really was not going to get much deeper without walking out for another couples of miles! It was just unbelievably shallow! I walked a bit further until I found a bit which was about a foot deep. I decided to kneel in it, and splash the water over my body. It really was all I was going to be able to achieve today. I was worried that the tide would start to come in again, and start surrounding my family who were all about a mile out from the beach. The tide is notoriously dangerous and fast in this area. Many people have been cut off and stranded when the tide starts to come in. 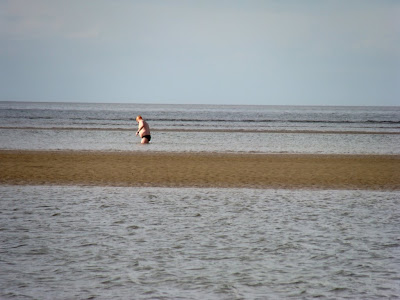 Above: Kneeling in 12 inches of water and splashing it over my body, the nearest I was going to get to a swim!

I ran back as fast as I could through the water, splashing it everywhere to ensure I got to feel 7 degree water on my body. I then had the incredibly arduous task of pushing the push chair all the way back again in the sand! 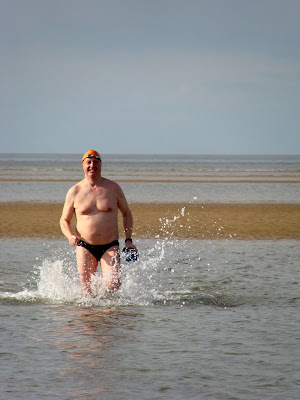 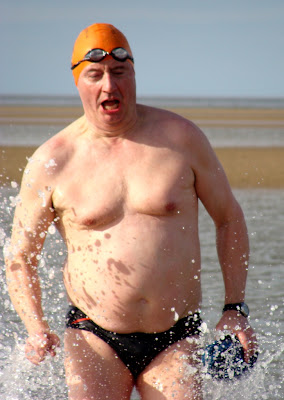 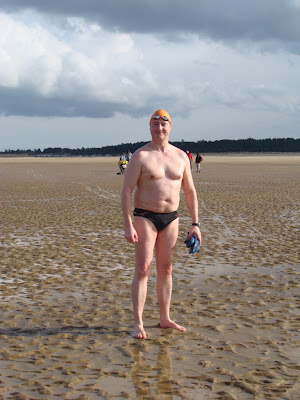 Above: Mission sort of accomplished. My first dip in 'The Wash', and it really was 'a dip!'. 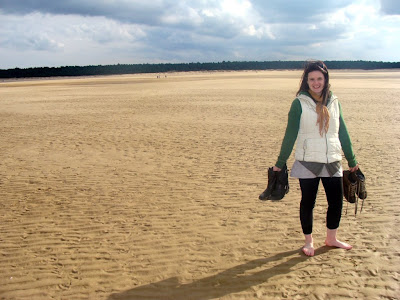 Above: Beccy and 'Bump 2' show just how far the tide goes out here. When it is in, the waters edge is near the trees in the distance. 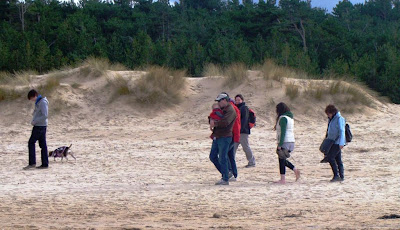 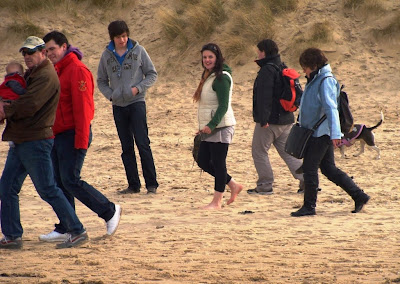 Although I did not get to swim per se, I did achieve my two goals:-

1) I have three useful numbers for pilot boats.

2) I have a mental reference point of what 7 degrees Centigrade feels like again, having not swum in this temperature for many, many months.

A good and satisfying first step back in the water, and the start of the journey to swim 'The Wash' in September of this year.
Posted on Monday, April 05, 2010

Glad to see you followed advice and contacted the RNLI. what took you so long?

Now if you time tide and time right the swim will be alitttle less than expected. next week dip amd swim then?

Hadn't been to Wells since September - that's what took so long! Hopefully get in some deeper stuff next week.

Hoff
Sounds great the wash
Legend. Congrats again to you and becky. Typical of you, set your goal and you follow it. Be in touch