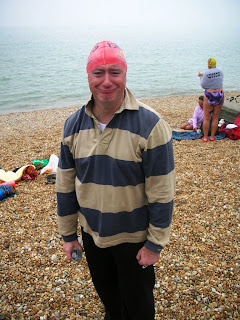 Above: Ecstatic about the thought of another 6 Hour swim the day after the first one!
The night of my first 6 hour swim was agony. Staying at the wonderful Sandown Guest House, I tossed and turned all night and barley slept due to the pain in my shoulders. When I got up I was knackered! I ate a full breakfast of a bowl of cereal followed by Bacon, Egg, Sausage, and beans, followed by a Herbalife Formula 1 Milk Shake, a cod liver oil tablet, 2 x Hebalife Schizandra plus tablets, a full flask of Maxim and 2 x paracetamol. I felt quite full after that lot! Somehow I was going to have to swim again and drive through the pain!

When we got to the beach, it was a totally different day than the previous day. It was dull, misty and not very warm. I really did not want to get into that water! I looked round at Beccy and she said "You wanted to swim the channel". My bottom lip dropped, she laughed and took the photo above. 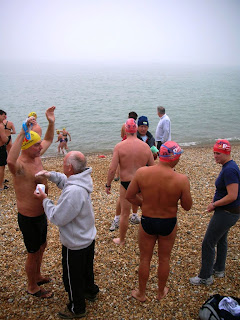 I stripped off, and Cliff put the vaseline in the necessary places (armpits, side of face where beard grows and back of neck). I looked down into my Speedos just to assure myself that it really was a decent size, not the size it became after a 6 hour swim! I then slowly walked into the water. 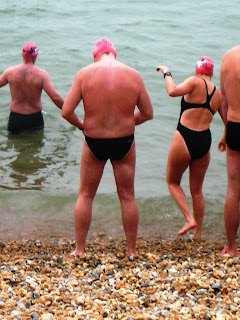 God it felt cold. Much colder than yesterday, but then again it was probably due to the fact that there was no sun out. It makes hell of a difference when the sun is out. I dived forward and started to swim towards the Eastern Docks doing the same course as yesterday (It turned out to be 14.1 Degrees Centigrade actually, the same as the day before but just with no sun on your back).

After about two hours, the fog cleared. It was still cold, but not unbearably so and I received probably about 6 jelly fish stings. But this was old hat now, no problems. I came in for feeds (Maxim, Banana and pain killers) at 2 hours, 4 hours, 5 hours, then there was just one hour to go. My shoulders really hurt. On the last hour, I slowed the pace down, and just swum to get through to hour 6. I was relaxed and in pain, but whenever it hurt, I just thought about something else. I switched off the pain. I headed towards swimmers beach at about 5 hours 50 minutes, and by this time the sea was really rough. Far rougher than the previous day's swim, but I was nearly there.

At 6.00 Hrs. I swum to shore, kneeled on the beach and was chuffed to bits! In two days I had swum 2 x 6 hours swims covering a total distance of 36.75 Km. This was a real milestone. 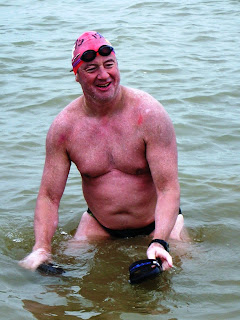 Above: Coming ashore after 6 hours. Relieved and pleased with myself.

I had now qualified to swim the channel not once, but twice in two days. Next week is the British Long Distance Swimming Association "Champion of Champion" event (5 Miles, 3 Miles then 1 Mile) in Dover Harbour. That should be easy after this most challenging but rewarding of weekends!

Mark - They are quite large Speedos! LOL!