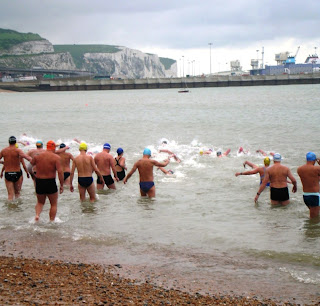 Above: The running start at the start of the first "Champion of Champions" event in Dover Harbour on Saturday June 16, 2007 - the 5 Mile swim.

This week's weekend training session was something quite different to the previous few weeks. This weekend I had entered in my second British Long Distance Swimming Association event (the first was the Colwick Park 4KM race). It was the "Champion of Champions" event, so called because there were three events the 5 Miles, the 3 Miles and the 1 Mile, and the fastest cumulative time was the winner, and thus the Champion of all three events.

I had never raced in the sea before. Until Colwick Park I had never raced in cold water before, but this was all good training for the channel. Having remembered the start at Colwick Park where there was much digging in the ribs with elbows, jostling for position and kicks to the face, I sharpened my elbows prior to the race. We all assembled on the start line (the beach where the waves brushed the shore) and waited for the whistle. The men and Women raced together, even though they were in separate races. Before I knew it, the whistle was blown by The General (Freda), and we ran into the sea, elbows flying all over the place. Once I got to a position where it was difficult to run any further, I dived into the water and started to swim. Looking up, I was already abut 50 Metres behind the leader. (Note for next race - Start right over on the left, there is a definate advantage!).

The race was long and very tough. The sea out between the 2nd and 3rd of the 4 Bouys was extremely rough, and the arms took a real battering as they came out of the water. I just put my head down and tried to keep a rythm 1,2,3, breathe right. 1,2,3, breathe left. 1,2,3, breathe right and so on... It was difficult. but it was the only way I could get across. It worked, and after 2 Hours 28 minutes and 52 seconds, I crossed the finish line, having sprinted and been flat out for the last 600 Metres or so, to keep the swimmer behind me at bay (Rob Deakin I think). I slowly came ashore and was greeted by my Coach John Stemp, wife Beccy and son Sebastian. I had really enjoyed that! It was tough but enjoyable. 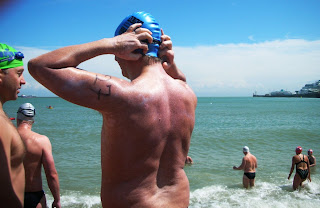 Above: preparing for race number 2 - a 3 mile swim this time.

After a break of about 1.5 hours, we assembled for the second race. I was surprised to hear, that some regular weekend channel swimmers had not completed the 5 mile race because of tiredness, shoulder ache, cold and "..it was too rough" etc. I think the only way we are going to get across the channel is to turn all of that off in your mind and just swim through it. "Winners never quit. Quitters never win" springs to mind. Come on guys, we're in this together fight through it!!!!

Anyway, where was I? Oh yes, the start of the 3 miles. This time I started right over on the left. The whistle blew, and I smoked it down the beach, into the water, dived forward, and I was right near the front! As can be seen from the picture below (in the middle - blue hat) I was about 4th at the start. Mentally, knowing we only had to go round the buoys three times rather than five, I picked up the pace and was in a medium fast sprint for the whole race. Again it was tough, with large waves pushing us backwards across the harbour, but I came in with a time of 1 Hour 15 Minutes and 21 seconds. What helped was that every time I came round to cross the finish line, Beccy, Sebastian and John were there shouting and cheering me on. That was a real motivator. 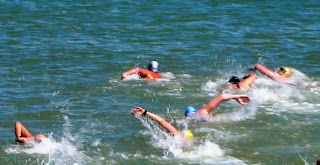 Above: The start of the 3 mile race in which I got a better start than the 5 mile race. Below: Formation swimming next to The Prince of Wales Pier during the 3 mile race (far right, blue hat). 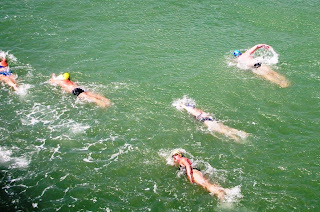 Still getting my breath back, I plodded very gently to shore resting my arms. Just at the moment of standing up, a Jelly fish brushed right across the front of my face stinging both sides and my lips before proceeding down my left arm and stinging all of that. I stood up and screamed and swore my head off at it. I looked down and there it was. An ugly looking bastard with some kind of black core. F#@K I let him have a gobful! That spoiled a good race. However, after about 5-6 minutes the pain was gone and I was fine and recovered waiting for the last race - the 1 mile. 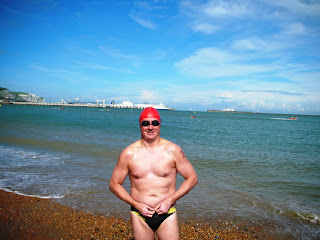 Above: Getting ready for the 1 mile race.

The 1 mile race started at about 4.45 pm. I got a great start and literally sprinted from start to finish. I remember thinking at the time, this was the equivalent of 64 lengths of a 25 Metre pool and I was flat out. I don't think that I have even done that in a pool! I had a massive battle with Simon Lee from start to finish. Try as I might, I just could not get past him. I was thinking of the Grand Prix how cars got in the slip stream then used the car in front to get past. I swam behind him then 1,2,3 pull out overtake, I got alongside him on the outside, but then he got me on the inside at the buoy! And so it went on. On the finishing straight alongside the Prince of Wales Pier, I pulled as fast as my arms would take me. I was touching his feet all the way down, but he beat me by 1 second! He finished in 20 Minutes 07 seconds, and I finished in 20:08. It was a great race.

At the presentation I was astonished to find out that out of the 28 starters, I was placed 5th in a total combined time of 04:04:21. It had been a great day (apart from the sodding jelly fish!). 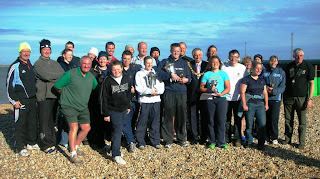 Above: The finishers at the end of a hard day (I'm the one second left with the ski hat on!). The Mayor of Dover pictured 9th from the right.

The Mayor of Dover presented the trophies and we had a good chat about channel swimming, and town and county councils among other things. We were given a finishing certificate with our times on (see below). 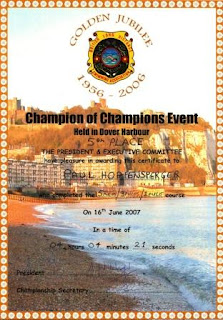 The whole day was a different experience, and it gave me some idea of what it will be like in the channel when I am asked to sprint for a period of time to get past ships or heavy seas etc. Next week, back to training with Freda and the group! Looking forward to it. Oh, and by the way, my title sponsor, Dangerous Films, may be there filming for part of the TV documentary. That should be an interesting experience!

Hey.. thats some going, very consistant, great effort and excellent training like you say, however....posing like that in the third photo in the red cap trying to show us that six pack, bet you couldnt speak when that was taken such is the effort to flex!!!! more guiness required me thinks

keep it up buddy, you're doing fantastic

Thanks Mark! I hadn't noticed the 6 pack! I was breathing in to do me trunks up at the time. Just about to have a Chinese and a Guiness. All the best.

Hi one more bit off advice from your mentor supertrev, Quit smoking before starting the second race, then you might have come first.

Ah. Supertrev. Such marvelous advice. I'm not sure why I didn't think of that one? Just a little spanner in the works though, I've never smoked in my life so am somewhat confused about said advice! LOL!

In the second race you said you smoked down to the sea.