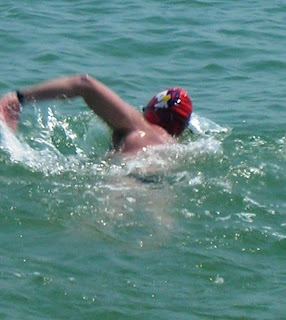 Above: Setting off for my longest and most difficult swim yet, on a foggy Sunday morning in Dover.

Getting up at 07.00 Hrs. on the day after my 3.5 hour, 9.4KM swim, I ached but was fully focused on doing a 4 hour swim. That's what I had thought about all the previous afternoon, and evening, and that's what I was going to do. I looked out of the hotel window and noticed how foggy it was compared to the day before. The sun was just about visible through the mist, but it was totally different conditions to the previous day.

I covered myself in suncream, and rubbed Radion B into my aching shoulders, put my trunks on and walked down to the beach. The General was there bright and early, and we had a good chat about getting the body to feed off itself in the channel. "It's really tough out there" she said "and you've got to let the body feed off itself and see how it feels. When you experience it in the channel you need to be able to fight through it otherwise you won't get across". Everyone arrived and we went through the usual routines. The same as yesterday she said "Red hats. 5 hours. Come in for a feed after 2 hours then every hour. Off you go". That didn't mean me of course because I was doing 4 hours. I got in and started to swim.

I went off on my own and swam at what felt like a comfortable pace. It was cold like the day before, but beacuse the sun wasn't out, there were no warm patches and so the temperature was better. After 2 hours, I came in for my first feed, which today was being given by Barry. Freda had told me before I got in that she prefered it if we all had the same mixture rather than me drinking my own. I came up to shore, and the helpers leant forward to give us our plastic cup full of WARM Maxim (I normally drunk mine cold). This felt good as it warmed the entire body up as it went down. 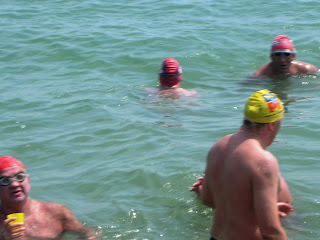 Above: Left, Kevin Murphy who has swum the channel an incredible 34 times, stops for the two hour feed while I swim off having just had mine. Cliff Golding (standing) administers the Maxim.

At the 3 hour feed, Cliff Golding passed me my Maxim and asked me how long I was doing. "4 Hours" I said. "OK" he replied. After the feed my shoulders really began to ache, and I was swimming along thinking about how good it will be when I got out in less than an hour. I passed the 3.5 hour mark and thought "Yes, this is my longest swim to date" and started feeling very pleased with myself. However, my shoulders really began to hurt. Unbearably so. On advice given by Ed Williams who swam the channel in 2006, I will be taking 2 x Ibuprofen tablets at the start, followed by alternate paracetamol and Ibuprofen at two hour intervals. However, I was not doing this today, and wished I was. At the 3.75 hour mark, I turned towards home and could barely get my arms out of the water because my shoulders hurt so much. God they hurt. As I approached shore at 3 Hrs. 58 minutes, I thought "Nearly there - then YEEESSSS! Done it. 4 Hours!! Awsome!". 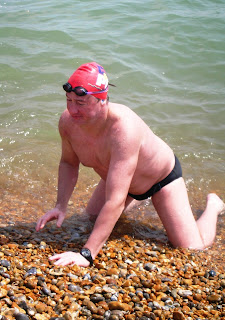 I slowly crawled out of the water (pictured above), physically unable to stand. "What are you doing" said Barry. "Getting out I replied". "He says he's getting out" shouted Barry to The General. "WHAATT!!!" she replied. Barely able to lift my head because my neck and shoulders were so sore, I slowly did so. It was like slow motion on the telly. The General came storming down the beach shouting and waving her arms at me. I have got no idea what she said but all I heard was "...5 hours...5 hours...across the channel...get back in there!". Something like that. It was like a bad dream and all souned quite surreal. I lifted up my arm and took a Maxim drink, not even having the energy to speak. Cliff Golding stood beside me. "Bad news?" he said with a wry smile on his face. "Yes" I said in a soft voice. "I've got to do 5 hours". "Yes. She often does that" said Cliff still smiling. I looked at him, turned round, crawled back into the water, and started to swim. 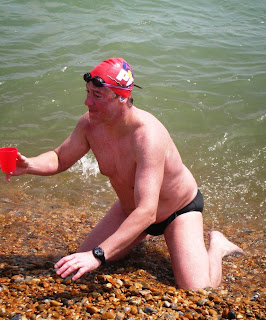 Above: Having the last and unexpected Maxim drink at 4 hours before turning round and crawling back into the sea.

I didn't know where I was, what day it was or how I was going to swim for another hour. I plodded off with the aim of doing one complete 2,395 Metre triangle in the harbour. Swimming off my arms were barely coming out of the water. To cap it all I was hungry. I was really hungry. "How much Maxim was in that cup" I thought. "Was there enough?". Because I hadn't mixed it I had no idea. I was cold, hungry and in pain. Nothing serious then. On the Friday evening, Beccy had had a huge portion of chocolate gateaux. I started imagining it. I started imagining diving into it and covering it all over my face. I was so bloody hungry. I could have eaten anything that anyone gave to me.

Eventually I reached the point where I was to turn for home at 4.75 Hours. The last hour had gone quite quickly really. I plodded home, with arms that felt the size of Arnold Schwarzennegger's, but with the strength of a sparrow's legs. They were shot to bits. I reached swimmers beach and crawled out. "Well done!" said Barry and Cliff. Beccy threw a towel round me and I said "Give me some food please. anything. I am absolutely starving". She gave me a half eaten sausage roll, and some cold "hot chocolate" which I gulped down. I got dressed into as many clothes as I could, the most important thing being to cover the head up (see below). 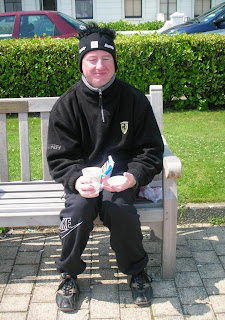 Above: Dressed for a skiing holiday, on a warm sunny day in June after a 5 hour swim in Dover Harbour.

After about 30 minutes of shaking profusely, and eating everything that was put in front of me, I realised that I had done 5 hours at 13 Degrees Centigrade covering 15.6KM. Even though I had thought that I couldn't go on any longer, I had done it. It was mind over matter. I can assure you I am now fully focussed on doing my 6 hour channel qualifying swim next weekend. I hope The General doesn't make us do 7 hours!

Crikey. Sounds like murder. I didn't know swimming could be so un-fun but then I never stay in the pool longer than an hour - and that's a nice warm pool as well. I bet the swimming pool will feel like the bath after what you've been doing!

You look very happy though on that bottom pic with your hot chocolate and wooly hat!!

How many hours will the actual channel swim take?

Hi Ruby. It's fun in some ways because I want to swim the channel and you have to go through this to do so. It's all mind over matter. To swim the channel, the time taken depends on the weather, tidal conditions etc. I am aiming for 14 hours. I will be pleased if I do it around that time. We will be doing at least 6 hours this Saturday and the same Sunday I think. It may be more. It depends on the General of course. If we do so, then I will have "qualified" to swim the channel. No one can swim it unless they have done a 6 hour qualifying swim.

LOL! The wooly hat and hot chocolate. Beccy thinks I look like a tramp on the bench. I didn't care though. I was so cold I just wanted to get warm!

(Mr Ruby felt like a tramp when we went camping in Southwold recently. He woke up on the floor in his sleeping bag, groaned, and said "All I need is a whisky bottle in a brown paper bag") (We loved camping really ;-))

Just off to the bench outside Thorntons with my can of Carlsberg Special Brew. Float...Float...Float on man!...