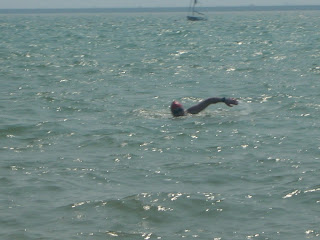 Above: Head up looking for Beccy as I come in for a feed in a very choppy Dover Harbour.
We were told by the General to arrive at Swimmers Beach at 09.00Hrs. this week. It will be like that now for the rest of the season. Getting there early we assembled into two groups, those swimming in July, and those swimming later. The General gave us all a lecture, which was 100% spot on. I will not repeat in here but all those who were there know what she said.

"July Swimmers" she said "Red hats. 5 hours. Come in for a feed after 2 hours then every hour. Off you go". I looked across at Beccy and said quietly "5 hours" lifting all 5 fingers to emphasise the fact. I did it again. "5 hours" I said looking at all 5 fingers to to make sure they definately added up to 5. Barry put the vaseline on the potential sore spots (neck, armpits, inner thighs), then I looked round at Beccy and said "5 Hours" once again, just in case she might have said "You don't have to do 5 hours" or something similar. But she didn't, she said, "I'm going up the town to get a book". My heart sank. The reason was that I simply hadn't prepared myself mentally for 5 hours. I had prepared my mind for 3.5 Hours having done 3 Hours the week before. I got into the 13 Degree Centigrade water and swum away in shock, repeating "5 hours, 5 hours". The water was dead calm, like a mill pond and easy to swim in.

Now this is a funny thing. When I got up in the morning, it was very hot and sunny, so had coated my entire body in Nivea Sun - Children's Sun Lotion - Utra 50+ Long-Lasting Water Resistance sun cream. When I entered the water it felt really cold. But as I swum, I kept entering warm patches which felt like a bath. When I suddenly hit a cold (13 Degrees patch again) it felt REALLY cold and I screamed out loud unrepeatables! It really knocked you off your stride, and I preferred it to be just cold, rather than warm, cold, warm, cold...etc.....

After about an 15 minutes, I met Sandy and Connor and we swum back and forth across the harbour doing a few sprints, but due to the above, I was shivering in the water. After 30 minutes, a wave hit me, which I assumed had come from a ferry. Then another one, and another. I looked up, and just like that, the weather had changed. The water had become really rough. It was lifting the side of my swim cap up, and water was seeping through my ear plugs into my ears. It was really rough and unpleasant. At two hours and having swum 5,4KM I came in for my first feed. 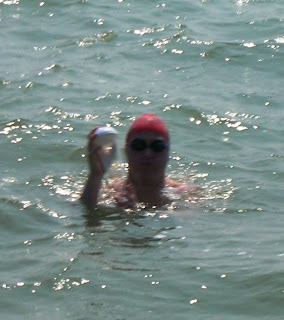 Above: Feeding in the harbour. Beccy throws it in in my Herbalife Shaker filled with Maxim, which I drink throw it back, then continue swimming.

I continued for the next hour with Sandy and Connor, covering another 3.25KM. My shoulders were starting to hurt, but more than anything I was shivering in the water, even though the sun was beating down on my back. I did not know how I was going to do 5 hours in this. I was thinking to myself, "3.5 hours today, 4 hours tomorrow, then 5 hours next week." This is what I had in my mind before I got into the water and it just goes to show what a mental attitude does for you. We lost Connor somewhere, and Sandy and I looked at each other and decided to call it a day after 3.5 hours and a total of 9.4KM.

We swum to shore, and even though it was my longest swim to date (3.5 hours and 9.4KM), I was really pi#@ed off with myself. I had defeated myself mentally before I had even got in the water because I had not been prepared for 5 hours. I had mentally prepared myself for 3.5 hours, and guess what? that's what I did. Funny that isn't it? 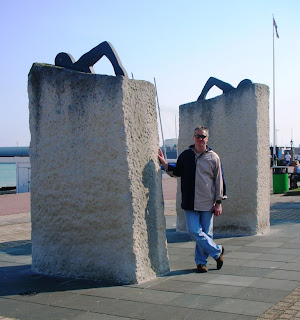 Above: Early evening in Dover, having showered, slept and recovered, standing next to the two swimmers statues near swimmers beach.

I went back to the hotel room, showered, slept for 2 hours, then walked down to the harbour and had the above photograph taken. I thought to myself, "I will do 4 hours tommorrow, and 5 next Saturday, then 6 on Sunday". I was still having negative thoughts and went to bed that night feeling really annoyed with myself over the whole day. Beccy said to me "I really thought you would do 5 hours". I knew she was disappointed, but so was I. It was the first time I had given in. Having swum in 7 and 8 degrees all over the winter, I was cold and mentally defeated at 13 degrees. I had to snap out of it for tomorrow's swim.