In the channel Swimmers forum this week, Damian and I have been having some banter which is not appreciated by everyone. I can understand that, but it is important in life to have some fun. We are all training for the channel, one of the toughest swimming challenges on planet earth. Last weekend was tough. Very tough, both mentally and physically. Having had three massages since I got out of the water on Sunday, I am still in pain. The mental side, I can get through by having fun. The physical pain just does not go away, but we will all get there with help, support and banter (piss taking where I come from) from each other. For those who don't like it. I apologise. For those who do, as they would say in Aus - "Good on ya mate!". I will continue where we left off on this blog...

As my wife was running the "Race for Life" this week, I travelled to Dover all on me own (all say AAAhhhhh!). It was a changeable weather day on the Saturday, and having discussed lightning etc., in the forum, nothing prepared me for when it arrived at hour 6!

Damien arrived on the beach, and prepared himself for what would become one of the most incredible swims ever known to man. Yes I mean 3/4 hour in Dover habour! 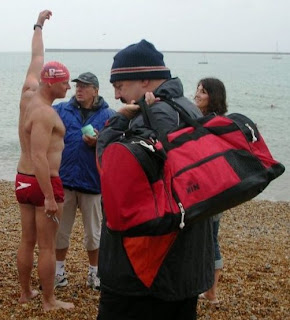 Above: Damien clearly psyching himself up for a mammoth 45 minutes in the channel while Cliff helps wth the greasing up process as ever...

When I got in, the important thing is that I didn't think about 7 hours. I thought about the first feed at 2 hours. This meant, swimmers beach to the Eastern Dock, 4 times back and forth between the Eastern Dock and Prince of Wales Pier, then in for a feed. 2 Hours gone. 1/2 a banana, maxim, then off for a 1 hour swim before the next feed. And so it went on until hour six, with chocolate mini rolls at hours 5 and six. By hour 4, my left shoulder was absolutely killing me! It hurt like hell. All I did was think about other things. I turned the pain off and moaned to Cliff at every feed. Before I knew it, 6 hours had gone, with only 1 hour to go. Then the heavans opened up!

It's funny swimming in the rain. You can feel it hitting the back of your hat, and you can see it hitting the water. However, when the forked lightning started coming down, it scared the crap out of me. But I was nearly at hour 7, and despite this and the fact that it was incredibly rough over by the Eastern pier all day, at just gone 4pm I came ashore having completed 7 hours in the channel.

I went over to have a massage with Louise which was pre-booked by 'The General' and it was just what the Doctor ordered! If you're training in the harbour make sure you get Freda to organise one for you. After a long bath and a large steak, I retired to my room and went to sleep. There were no sheep involved (Channel Swimmers forum thing!).

I arrived at the beach and interviewed Alison Streeter for BBC Radio Suffolk. I got a bollocking from the General for "being late on parade" when I was actually interviewing her daughter! Oh well, never mind. I'm used to them now. I got in the queue to be greased up and took some photos which have really made me laugh when I got home (apologies - no offence meant to anyone - honest)... 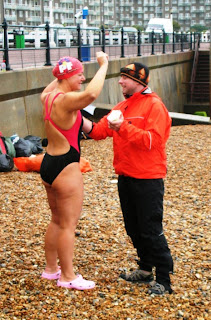 Below: "Come on let me give you a hand. I'll do the right one". (Great job being a channel swimmer greaser upper isn't it!) 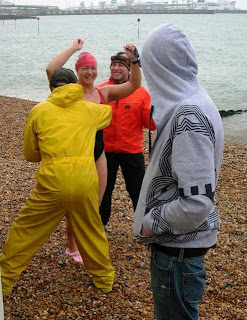 When I got in the water, first of all I was cold. Really cold. It was dull, misearble, and my right shoulder was now killing me wheras my left was fine! I think I must have compensated too much the day before. I went through the same routine as the previous day, with the feeds, but I was shivering constantly. I honestly didn't know how I was going to do 6 hours. However, Cliff and Barrie were always there to spur me on. "Great Swimming" said Cliff. "You are like a different swimmer compared to yesterday". I kept thinking he was talking about someone else because I felt like shit! Somehow, just somehow, I swum into hour 6, and headed towards the shore at 5 hours 58 minutes on my watch. I waited in the water until 6 Hours, then thought "YEEESSS!!!". Split channel swim complete!

I can’t put into words how great it was to meet Cliff Golding at Tooting Bec Lido in March, which resulted in me training in Dover each weekend since the start of May.

I honestly believe that if I do get across, it will be because of Freda, Barry and Cliff's enthusiasm each week. I can’t believe how inspirational all three of them have been to me. Week after week they are always there, rain or sunshine. On Saturday I struggled badly due to shoulder pain. On Sunday I was cold for 5.5 hours out of 6. The thought of giving up in front of all three of them kept me going. It wasn’t an option. For that I am eternally grateful, and will remember this in the channel. Thank you so much for all of your help.

Handing in my notice today, what a job, is becky going to take up swimming!!!.