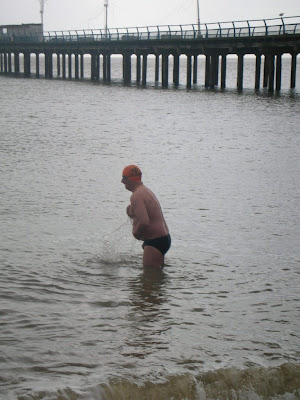 On Saturday April 05, 2008, I decided that having spent such a glorious week in Estapona in relatively "warm" water at 15.4 Degrees Centigrade, it was time to come back down to earth and get in the nice cold North Sea. Setting off for Felixstowe, I wondered what would greet us when we got there.

Parking in the car park on the sea front by the pier, I was really pleased to see that the water was probably the calmest I had ever seen it, even if the sky was very grey and it looked very uninviting. This was going to be a good swim.

I went down to the sea shore undressed, Beccy put my kit in the bag, and started her usual walk along the sea front armed with backpack and marching shoes. I stepped into the grey sea and went rigid. It was absolutely freezing. I couldn't believe it! I splashed water over my body, and people started gathering on the promenade in disbelief. Eventually I eased myself in, and started swimming. God it was cold. Really cold. 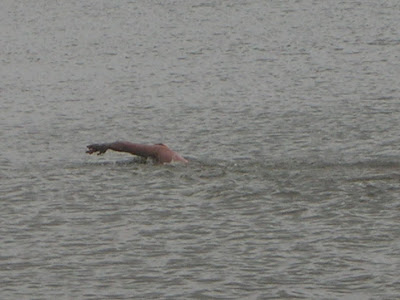 After about 100 Metres, I stopped and started swimming breastroke. It was my face and head which was causing the problem again, as in Belgium in December 2007. I had an immediate "Ice cream headache" as I call them. I started swimming again for about another 300 Metres, but simply could not keep my head in the water. 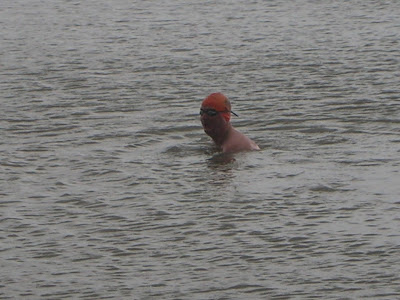 I stopped looked at Beccy, and she was merrily marching along the promenade at a fast rate of knots. My right arm then started to have a "tingling effect". I did not feel right at all. I felt terrible. Once my arm started, I made the instant decision to get out. Something simply did not feel right about being in there this day.

Once out on the promenade, it began to hail. I just stood there talking to Beccy in my Speedos, no problem, not cold at all. I just looked at the sea feeling annoyed and defeated. But I have been in cold water enough times now to know something did not feel right on this particular day. I hadn't even been in long enough (about 6 minutes) for my temperature gauge to register the water temperature, but it felt around 8 Degrees Centigrade. I decided that I would wait now until the first Dover training in May before I went in the sea again, when the water had warmed up to a nice 10 Degrees Centigrade!
Posted on Wednesday, April 30, 2008

I hate ice cream headaches, they are so painful but WHY doesn't everyone get them Picklesgrandad does but Picklesgrandma and Picklesdad don't and think we are making it up.
You should not have been swimming at Felixstowe with an unexploded bomb on the loose!

PM - I hate ice cream headache's too! Unfortunately I keep getting them while swimming now but didn't last year. I don't understand it! Tell PM's Grandad and Grandma "They exist!" from me.

RE "The bomb" - I know, when I went in it was probably rolling around underneath me. That would have warmed me up if it had gone off!!!

Remember Slush Puppies? Guaranteed to give you an ice cream headache! Especially those blue ones. YUM!

Absolutely, we used to have them at 'RollerBury'. Real Ice Cream headache material!