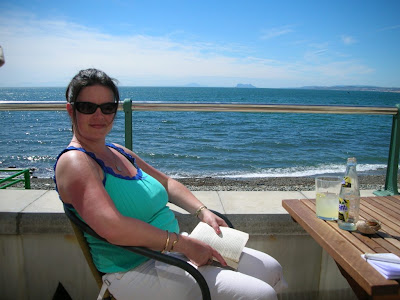 Above: The stalwart part of all my swimming adventures, my wife Beccy, taking a rest at the end of a swim. The rock of Gibraltar (right) and Africa (left) can clearly be seen in the distance.

After the escapades of days six and seven in Estapona, Day 8 would have been much better if it hadn't of been for one thing, it was 'Good Friday' the day before. Why would that affect my swimming you might ask? Well here's why. Our hosts for the week, Mike and Monica Ames, are catholic. Good Friday is a day of fasting and abstinence. Therefore all day Friday, Mike wasn't drinking, but due to not being able to swim properly due to the bizarre sea conditions, I was. That is, all afternoon and night until one minute past midnight when Mike decided to join us and start drinking! It turned out to be a very late night with Mike and Beccy after Monica had gone to bed!

Getting up later than usual on Easter Saturday, I had a real thick head! I got up, looked out onto the balcony and saw that it was really windy. There were "White horses" on the sea surface, but I could see it would be fine to swim in, so off I went. I decided to do a 4KM swim, from the apartment's, against the tide for the first 2KM, then turn round and swim back to the apartments. 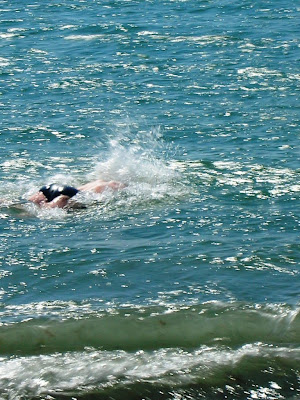 I set off and it felt quite cold again, with the temperature bottoming out at 15.5 degrees Centigrade. My head thumped all the way up and back again. "Why did I drink so much yesterday?" I thought. "Because I'm on holiday!" I replied. (It's good to talk to yourself when you swim, it keeps you amused). 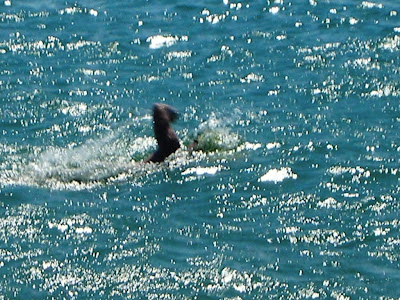 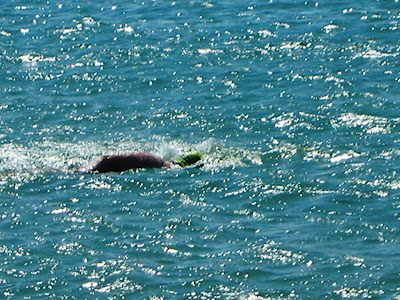 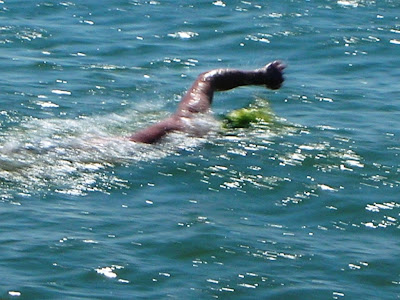 I went past all of the usual buildings on the right, finally reached the rocks at the 2KM point, and turned round to head back. Beccy was as usual, walking full sprint beside me, then she stopped, but I kept swimming, head thumping in the cold water. 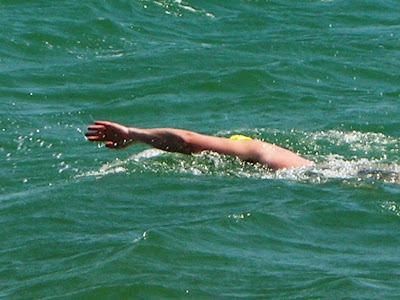 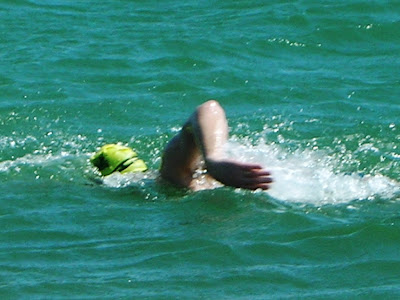 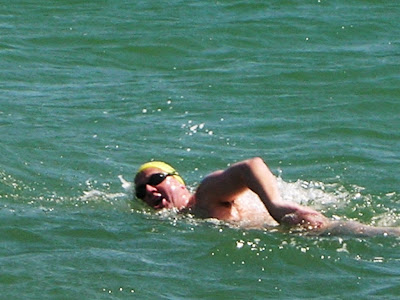 "Why had she stopped?" I thought. Below is a picture of why she stopped. She found a fish on the beach which looked like it was still breathing. Only, she didn't know if it was the right way up so she turned it over. She put it back in the water but apparently it was dead. Does anyone know what type of fish it was? 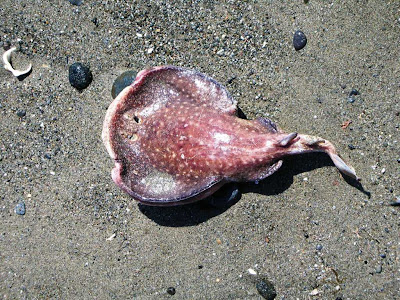 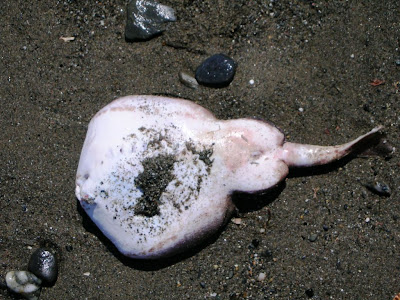 Above: Strange fish. Anyone know what it was?

Eventually, I completed my 4KM swim, walked ashore, had a shower and slept for about 2 hours to clear my head! 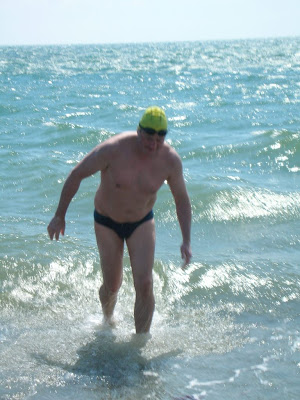 Well, I can honestly say, that I enjoyed our trip to Estapona, and actually fell in love with the place. I could easily live there. What more can you want? Sea, sand, beaches, "shared-space" streets, and good food and wine! I was really sad for the first time in a long time to be actually leaving a holiday to return to Bury. Especially as there was snow on the ground when we got back! 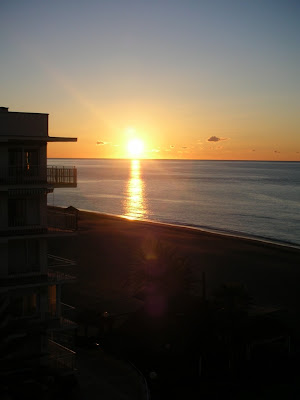 Getting up very early on Easter Sunday to catch our flight home, I caught the above photo of the sun rising, and the sea was dead calm. It was just beautiful. It was a fantastic week, and I decided there and then that one of my future swims would be to swim the Gibraltar Straight.

Thank to Mike and Monica Ames for hosting us, thanks to Beccy for walking beside me every day to keep an eye on me, and I'm sure we'll return to Estapona again in the future, hopefully as a two-way channel swimmer!

To see why I am doing this training and attempting a two way channel swim, please click on the link below and if you would like to, please sponsor me:-

Think I might have to "pop" over to spain next time Im home with the family. It all sounds wonderful! The fish looks a bit like a baby stingray... not sure but its the right shape. Any other ideas?

Hi Louise! Long time no speak. Good to hear from you and hope all is well down under in Tasmania. Yes, Estapona was lovely, and we really enjoyed it. Re the fish, it does look like a stingray, but I'm not sure it was. I don't know if you get stingray in the med, but I'm not sure. Hopefully not as I'm not sure I'd want to swim in it again!LOL! Do ring me on 07887 711333 when you are home again. It would be good to catch up. Speak soon. Hoffy.